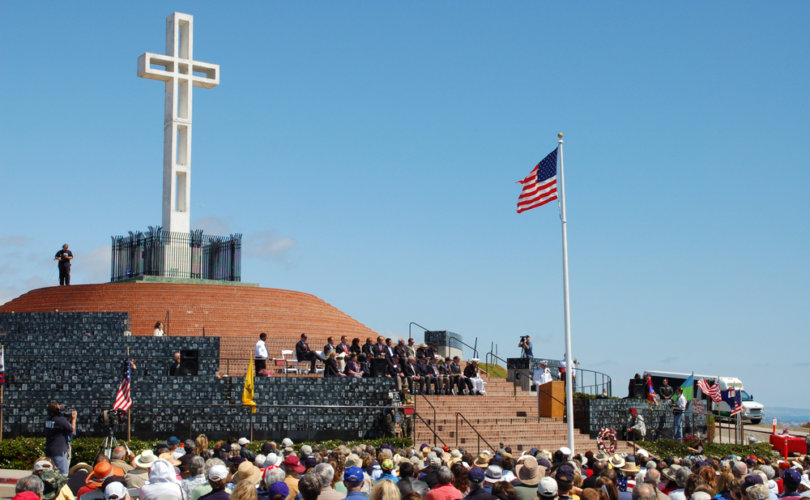 October 21, 2016 (LifeSiteNews) — The recently concluded Mt. Soledad Cross case was the longest running First Amendment Establishment Cause case in the history of the United States.  It lasted 27 years and I was actively involved for the last 12 years. During those dozen years, I estimate that I put in over $2 million in pro bono time. Over that period, the San Diego City Council voted on the issue multiple times, there were two citywide votes of the people of San Diego, Congress voted on legislation relating to the Memorial three times, and the case was appealed to both the California Supreme Court and the United States Supreme Court. I was even honored to attend a meeting in the Oval Office of the White House with President George W. Bush, for the signing of key legislation involving the Memorial in 2006. Thus, all branches of our government, from the grassroots level, to the national level, came into play, sometimes in dramatic ways, just over the past decade. The ten key lessons that I learned over this period are the following:

1. Never give up. There were numerous adverse court rulings and major disappointments along the way. Many times people said that it was a hopeless fight and that we were wasting our time and money.  Yet, throughout it all, the Cross remained standing and, as a result of the team effort of many patriotic Americans, it will now be there for future generations to enjoy. This is only because we persevered in our efforts, sometimes against great odds.

2. Don't be afraid to change strategies. When the Federal Ninth Circuit Court of Appeals said that we could not keep the Cross on City property, then we helped our client, Congressman Duncan Hunter, Sr., draft legislation to transfer it to federal property.  Then, when the Ninth Circuit said that it could not stay on federal property either, we helped our former client's son, Congressman Hunter, Jr. draft legislation to transfer it to private property under the ownership and control of the Mt. Soledad Memorial Association. Thus, but for this hard fought litigation, the veterans who built and maintained the Memorial since 1954 would never would have had an opportunity to own it; nor would they have had occasion to add the walls and plaques that have transformed it into a world class war memorial for all to enjoy.

3. Let people know what is happening. The Memorial remains intact, with the Cross as its centerpiece, because the people of San Diego and the nation were made aware of the threat to dismantle it, and they in turn made their voices heard to their political leaders. Those politicians responded both at the local and the national level. The successive San Diego Mayors, Dick Murphy and Jerry Sanders, got behind the Memorial, as did Congressmen Hunter, Jr. and Sr., Issa, Bilbray and Cunningham, and as did U.S. Senators Boxer and Feinstein, as well as Governor Arnold Schwarzenegger. Conservative radio talk show hosts Roger Hedgecock, Mark Larson, and Rick Roberts were among the many media personalities who gave their support to this effort, as did Matt Hall with the San Diego Union Newspaper, and Sasha Foo with the KUSI TV news.

4. The heart of America is still strong. Most Americans care about our nation and the sacrifices of our veterans. They often feel powerless however, to give positive action to those patriotic sentiments.  Americans will rally around a good cause led by a strong leader.  When that happens, seemingly insurmountable odds can be overcome and huge victories obtained.

5. Form alliances across denominational lines. These culture war battles require that numerous organizations work together to accomplish their common goals.  The San Diegans For the Mount Soledad National War Memorial was a grassroots organization headed by two practicing Jews:  Phil Thalheimer and New York Mike Shelby. The leadership team, of which I was privileged to be a part, also consisted of members of other faith based groups including Catholics, Protestants, Evangelicals as well as various civic and veterans organizations like the American Legion. They worked harmoniously and many of us formed deep and lasting friendships. Through our united efforts, we were able to get Proposition A passed, to keep the Memorial “As It Is… Where It Is”,  by a whopping 76% of the vote of the people of San Diego.

6. Don't be too territorial. When I became wary of others who offered to help, because it appeared that they might have wanted to steal the credit, I became much less effective. The lesson I learned is to welcome all those who are willing to assist you and don't worry about who gets the credit. The end result is more important than who does the media interviews or has the most successful fundraising efforts. Because I funded this expensive litigation with my own money, I was not in competition with anyone and was able to focus all my efforts on the end result.

7. These cases are often decided on ideological grounds. Lawyers and judges are generally no better or worse than the culture of which they are a part. This is unfortunate because we take an oath to uphold the Constitution and our fellow citizens should be able to expect more from us. The fact is, however, that the law both molds and is molded by the culture. Too many judges decide these culture war cases based upon their ideological predispositions. The result is often more predicated on which political party the judge belonged to and who appointed them to the bench, rather than on good legal analysis. This may sound cynical, but I have seen it play out this way far too often. Elections do have serious consequences, particularly when it comes to who gets to appoint the judges that decide these culture-defining cases.

8. Argue the facts and law but don't deny your faith. The Establishment Clause cases require a secular analysis as to who built and paid for the Memorial, how long it has been there without a legal challenge, whether it is located around government buildings, and whether it has a legitimate secular purpose, etc. I never denied the opposition's claim that the Cross is the preeminent symbol of Christianity, or that I was a Christian that venerated the Cross for religious reasons. However, my personal beliefs, and those of others, should not have been a factor in the legal analysis, as the State Court of Appeal so held. What was important is that the Cross served the legitimate secular purpose of honoring the sacrifices of our veterans, many whom paid the price of our freedoms with their lives.

9. Don't be naive about the forces arrayed against you. When speaking to Christian audiences, I have not been shy about telling them that I considered this a spiritual, as well as a legal battle. There are many people that hate the fact that our nation has a Judeo-Christian heritage; and they want to erase it by scrubbing the public square of any religious symbols. This is not something that our Founding Fathers ever would have tolerated. They realized that religion helps form our morals and our morals form the basis of our laws. We can not allow radical secularists to sanitize the public square of religious symbols, so that what is “out of sight” is also “out of mind”. Therefore, it is no exaggeration that these culture war battles do involve a fight for the heart and soul of our nation.

10. God still works miracles. I would venture to say that most of the people involved with the case on our side of this battle realized, again as did our Founding Fathers before us, that the hand of Providence continues to play a vital role in the life of our nation; at least it does when our citizens earnestly pray for that to happen. One of the best examples for me is that the U.S. Senate voted to transfer the land to the federal government, and thus prevent the removal of the Cross, on exactly the 54th day of a 54 day Miraculous Novena, which was prayed by a steadfast group of supporters of the Memorial. Remarkably, this unexpectedly happened through a vote that was both unscheduled and unanimous. There was no opposition from any of our nation's Senators, despite the fact that they were being lobbied by the ACLU to vote against the legislation. In the U.S. Senate at that time were Barrack Obama, Hillary Clinton, Joe Biden, John Kerry and many others who have not exactly been great champions of religious liberty. The timing and gravity of that vote, as well as many other major milestones in this landmark case, were no coincidences in my mind. My 33 years of legal experience have taught me that such extraordinary results are rarely the result of extraordinary human efforts alone. Therefore, after 27 long years, to our heroic veterans that have continued to fight with us for this great victory, goes our heartfelt gratitude and admiration. And to our just and merciful God goes all the praise and glory.

Charles S. LiMandri is the President and Chief Counsel of the Freedom of Conscience Defense Fund, which is a national nonprofit law firm that specializes in religious liberty cases particularly at the trial court level.  Mr. LiMandri is double board certified and is licensed to practice in California, New York, Washington, D.C. and before the United States Supreme Court. The FCDF website is www.consciencedefense.org.