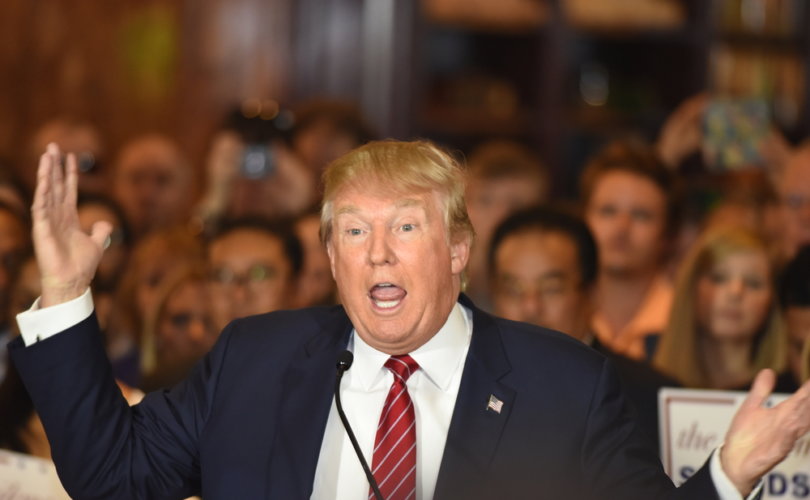 April 1, 2016 (Priests for Life) — A media firestorm erupted on March 30th with Donald Trump’s recent very unhelpful statement about penalties for women if abortion were once again illegal in the U.S.  Trump was clearly baited by Chris Matthews of MSNBC during a town hall event where he made those statements.  But the exchange revealed that Trump has not thought through the issues involved with unplanned pregnancy and abortion decisions, and is lacking in some essential perspective and education on the topic.

Mr. Trump and his advisors would do well to spend some time reading the testimonies on the Silent No More Awareness Campaign website to better understand the impact of abortion on women and men before talking about hypothetical penalties for women if abortion is once again an illegal activity in the united states.  Trump fails to mention any penalties for the fathers of these unborn children who in many cases play a very important role in the decision of women to have an abortion.

Those who support abortion rights and their allies in media and entertainment are fond of painting a negative caricature of pro-lifers as angry and judgmental fundamentalists.  I have been involved in abortion recovery ministry to women and men for the last 20 years.  I have been humbled and blessed to see the love and practical help that pro-life advocates share not only with pregnant women and their children  but to anyone who has participated in the death of an unborn child.

The pro-life movement has  been at the forefront of efforts to bring reconciliation and healing to those who suffer after abortion.  Fr Frank Pavone of Priests for Life has  been a leader in both pro-life activism and abortion healing as Pastoral Director of Rachel’s Vineyard Ministries.

Fr Frank shares that being pro-life means being pro-woman:

To be pro-life means to be pro-woman. It doesn’t mean that we love the babies and we forget about the mothers. What it means is very simple: Why can’t we love them both? Protect them both? Welcome and care for them both? We can and together we will.

Many women and men who have experienced abortion loss (and found reconciliation and healing) can be found volunteering to help provide the support and resources to those facing unplanned pregnancy.  They have also been pioneers in developing  recovery programs for those who have participated in the death of an unborn child.

To be fair, Mr. Trump later recanted his remarks:

If Congress were to pass legislation making abortion illegal and the federal courts upheld this legislation, or any state were permitted to ban abortion under state and federal law, the doctor or any other person performing this illegal act upon a woman would be held legally responsible, not the woman. The woman is a victim in this case as is the life in her womb…

Perhaps this unfortunate gaffe…can turn out to be a blessing and provide an opportunity for Donald Trump and the other presidential candidates to consider the following:

Please have your staff spend some time getting to know the leaders in abortion recovery ministry. Sit down with women and men who made the decision to abort and were deeply wounded by that experience.  Hear their stories, listen to their pain and learn of the impact that the Shockwaves of Abortion had on their lives and relationships.  You won’t just hear of pain and despair.  You will witness the mercy and power of God manifest in the lives of those who like the Prodigal Son were dead but are now alive, were lost but have been found. (Luke 15:32)