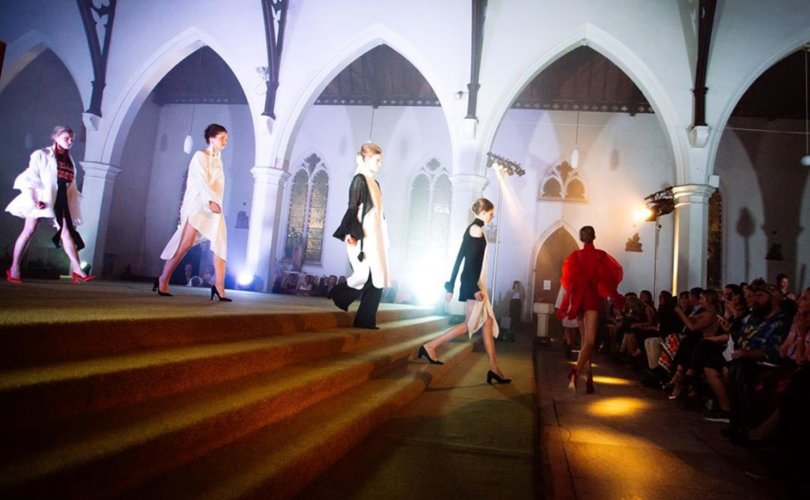 December 16, 2016 (LifeSiteNews) – The Catholic archbishop who allowed a semi-nude, sexually charged fashion show to take place in one of his archdiocese's churches is the same prelate who just slammed the four dubia cardinals for seeking “false clarity” amidst the world's “shades of gray.”

Archbishop Mark Coleridge of Brisbane, Australia told America magazine that Pope Francis is “bringing out into the very public setting of the papacy what any pastor does in his parish or diocese”–but that priests can't “necessarily” provide “clarity and certainty on every question and every issue.” He said Pope Francis “wants a genuine clarity” while the four cardinals are seeking a “false clarity.”

In October 2016, St. Patrick’s Church in Fortitude Valley hosted a semi-nude fashion show and ballet with the approval of the archdiocese. St. Patrick’s is administered by St. Stephen’s Cathedral, which is under Coleridge’s pastoral care.

Liturgical expert and Wyoming Catholic College professor Dr. Peter Kwasniewski called the show “sacrilegious” because it “profaned the sacred space” with” the explicitly sexual libertinism of the ‘show’.”

An archdiocescan spokesperson defended the show as a “significant community event that takes place within the parish boundary.”

A review of the show explained, St. Patrick’s “monumental gothic structure and stained glass windows lent an ethereal and quasi religious quality to the night’s candlelit proceedings.” The “musical repertoire seemed not to have been chosen for its religiosity but rather for the ironic nature of the titles as these seemed to simultaneously reference the spiritual life whilst undermining the stability or surety of the promise offered by the sanctuary itself.”

During the show, an almost nude man and woman wearing flesh-toned undergarments re-enacted the fall of Adam and Eve.

“There are still people who are more comfortable, for various reasons, with a more static way of thinking and speaking,” Coleridge said regarding the dubia and confusion within the Church. “And there are people who are perhaps more comfortable in a world of black and white and who find the process of discernment, which deals in shades of gray, messy and unnerving.”

And then there are the people who find the process of sensual, explicitly anti-Christian displays in sacred spaces “unnerving.”

– Catholic archdiocese allows ‘sacrilegious’ semi-nude fashion show in a church – then defends it
– Who are the four Cardinals who wrote the dubia to the Pope?