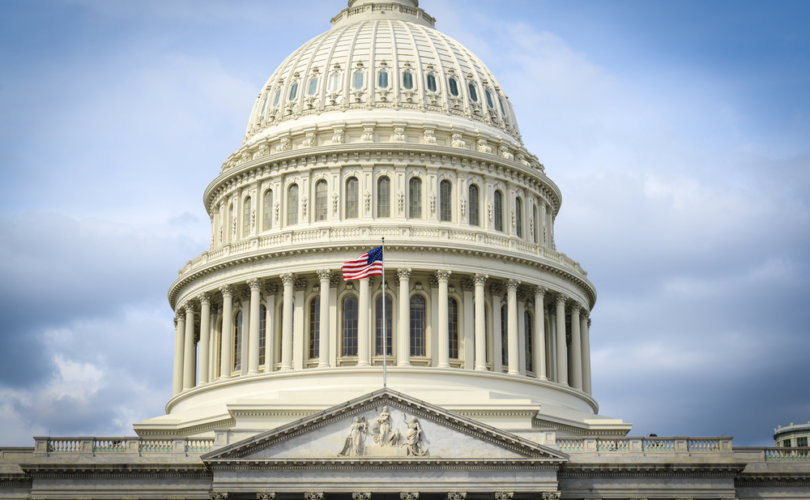 August 23, 2018 (American Thinker) – It's said that just because you're paranoid, that doesn't mean someone isn't out to get you. There have been constant serious threats to our country since our founding in 1776, starting with the British through the early 19th century and the Nazis, Imperial Japan, and nuclear-armed Soviets in the 20th century. Those were primarily external threats.

Today, our civilization is in more danger than ever. While there are still external challenges, the most serious threats are increasingly internal. Individually, each is troubling but not necessarily fatal. Blended together, like adding glycerol to concentrated nitric and sulfuric acids to form nitroglycerin, we have to ask, is America facing a perfect storm?

10. Radical Islam. It took two attempts, but radical Islam finally managed to bring down the Twin Towers in New York City in 2001. Since that major attack on America, radical Islam attacks have persisted on a lesser scale. Under the purposely vague label of “terrorism,” according to newamerica.org, there have been 406 jihadist assaults on Americans, resulting in 103 deaths, since 2001. Countless other attempts have been thwarted by law enforcement. A radical American-born Muslim group was busted in New Mexico teaching children to shoot up schools. Meanwhile, with help from a compliant media, sharia law proponents have reached critical mass to win statewide and congressional seats. It's a creeping threat to our Constitution, the document essential to holding our increasingly diverse population together as a nation. Sharia law is not remotely compatible with our Constitution. Nevertheless, Democrats find themselves increasingly allied with Muslims, including the girlfriend-assaulting deputy chair of the Democratic Party.

9. Lying, Evil, Greedy Politicians with Questionable Loyalties. Nothing defines this issue more than N.Y. governor Cuomo, who said America “was never that great.” Whaaat? Is he referring to the country regarded as the hope of the free world that saved Europe and Asia from fascist tyranny, the country that has given the world transformative improvements in medicine, technology, music and the arts, the country that created the highest standard of living in the history of the world, the country that sacrificed over 300,000 of its men to end slavery, the country with a Constitution that defines the rights of the individual against progressive governments? When obstruction and self-dealing become the primary goals and policy of one of the two major political parties instead of trying to make our country greater, you know there's a problem.

8. Diversity/Identity Politics. With identity politics cloaked in the guise of diversity, is there room for competence? Federal and state grants come laden with various demands for diversity. Businesses and government institutions find themselves saddled with vice presidents and directors of diversity. Universities have indoctrinated their students with diversity to the point where white males are now under direct assault throughout our society. The diversity purge is a threat to fundamental excellence in major businesses and institutions. Every good American wants all people to be treated fairly and with respect and to be given the right to succeed. We want people to be judged on their competence and their character, not on their race, sex, or sexual preference. Whatever happened to the notion of the best and most qualified person for the job? How is identity politics helpful to our country? It's not. It's damaging. It's a Democrat thing. Any fool can see this.

7. Fake News, and Now Google. Yes, folks, fake news is very real. Gary Gindler on American Thinker reports, “Google has introduced a practice nicknamed 'expulsion to the 101st kilometer,' referring to the Soviets forcibly evicting dissenting citizens 100 kilometers or more from Moscow. … [L]inks to conservative sites has artificially moved beyond the first hundred links. Google knows that people, as a rule, scan just the first ten to twenty links. Consequently, Google creates an impression that the whole world is full of leftist ideas only. Professor Robert Epstein believes that the Google algorithm gifted Hillary Clinton in 2016 with at least 2 million votes.” Facebook routinely shadows conservative stories so they are not seen by a larger audience. “Facebook's removal of links … has resulted in a 93% decrease in web traffic from this social network to leading conservative sites since the 2016 elections.” Fake news on TV and in newspapers starts with outright lies and slander against conservatives and the president of the United States. One survey found that 90% of news coverage is slanted against the president. Even more insidious is censorship by omission. Important stories on sites like American Thinker, Frontpage Mag, Breitbart, LifeZette, the Geller Report, and Drudge will rarely or never be found in the so-called mainstream media. Americans deserve better.

6. Assault on the Second Amendment. The right to bear arms is a fundamental right granted to Americans by the Bill of Rights. It's not about hunting or sport shooting. It's about self-defense from personal assault, home invaders, or potentially a hostile government. Like all fascists and communists, the left dreams of seizing control and confiscating guns from citizens who might threaten the left's rule. Every time there is a mass shooting, regardless of the reason, such as Islamic terror, drugs, or mental illness, the leftist drumbeat is heard again, demanding more and more controls on gun rights. Chip, chip away is their strategy. The NRA has provided a continuing brilliant defense of the Second Amendment so far, but watch as the left wing continues to attack the NRA and one of our most basic rights.

5. The Drug Crisis. A National Geographic TV series examines the drug crisis in various locations around the country, including Miami, Baltimore, and Montana. The series shows not just the overwhelmed law enforcement people, but also the junkies (victims) and dealers. From opioid use to heroin and even everybody's favorite “recreational” drug, pot, a significant part of our population, particularly younger people, has been rendered not just useless, but a burden to society. More than 72,000 Americans died from drug overdoses in 2017. That's almost 200 a day. Nearly half of all federal prisoners were involved in drug-related crime. Meanwhile, Hollywood and the music industry make drug use look like good old-fashioned fun. The media pretty much ignore the issue. It's a fundamental cancer in our society. President Trump has just announced a new plan to punish the dealers. We can only hope it works.

4. The Military as a Reflection of Our Society. The American Conservative reports that military recruiters are struggling to fill recruiting quotas. This disturbing problem isn't just that young people don't want to join the military; it's that they are not qualified to serve. The result is that the U.S. military is increasingly not representative of America. “For that to be true, two thirds of our military would have to consist of obese, under-educated former drug users and convicted criminals.” One in four can't even meet basic high school graduate standards. One in ten has a criminal history. Only one out of eight even wants to be part of the military. There is also a geographical issue. Young people interested in the military mainly come from small towns in the South where there are traditions of military service. The trajectory here is not healthy. The military is among the most respected institutions in our country. We had a true civilian army in WWII. But today it's disturbing that only an increasing minority can or will serve.

3. Illegals, Homeless and Violence Overwhelming Our Cities. Except for the rich, American cities are becoming increasingly unlivable as illegal and homeless populations threaten to overwhelm city budgets. It's so bad in San Francisco that the city has funded poop patrols as that once lovely City by the Bay has become a nightmare to citizens and visitors alike. Large groups are canceling conventions. Los Angeles has doubled its homeless budget to $450 million. Los Angeles County plans to spend $374 million. That's 1 percent of a budget meant to service a population of over 10 million going to just 53,193 people. In addition, violent crime increased in many of the nation's largest cities in 2016 as metro areas saw jumps in homicide, robberies, and aggravated assaults. Chicago shooting deaths are approaching war-like proportions, with 664 people killed in 2017. So far in 2018, 360 homicides have been reported, most of them from gunfire. The Democrats who run these cities, many of them sanctuary cities, have no clue how to deal with the situation other than to spend more money of taxpayers dumb enough to stay behind. Democrat policies are leading to financial and social disaster. It can't go on forever.

2. The Education Disaster. A friend of mine said he heard a caller into the Rush Limbaugh show shortly after Trump's inauguration say something to the effect of “you have Trump for a short time; we have your children, heh, heh, heh.” I can't confirm this quote, but I think the statement, true or false, underscores the capture of our educational system by the left. Frontpage Mag offers this stunning video.

Increasingly parents, particularly conservatives, need to be concerned about sending their offspring to expensive universities and having them return as poorly educated dedicated leftists, struggling to find a job, loaded with debt, and unable to think clearly about the world or their place in it. Free speech is often not just discouraged, but essentially banned. High school students are taught little or no history or patriotism. Street interviews reveal young people so uneducated that they can't identify the vice president, state who won the Civil War, explain what the Fourth of July celebrates, find any country on a map, or qualify for military service. There can be no greater danger to our civilization than a poorly educated public, but increasingly, it seems that's what we've got.

1. Does Anyone Care? A frog put in a pot of cold water on a stove that slowly starts to cook him is the classic example of how danger can creep up. A Bankrate.com survey found that 69% of Americans say they lose sleep stressing over worries about relationship and money. These same hardworking Americans are also busy with their jobs, their families and relationships, their mortgages, and hobbies and activities, while still finding time for recreation and good times. There is precious little time left over to stay current with events. Meanwhile, progressives, many of them wallowing in cushy taxpayer-funded university jobs, are aggressively active and laser-focused on their anti-American agendas. The pot is already simmering.