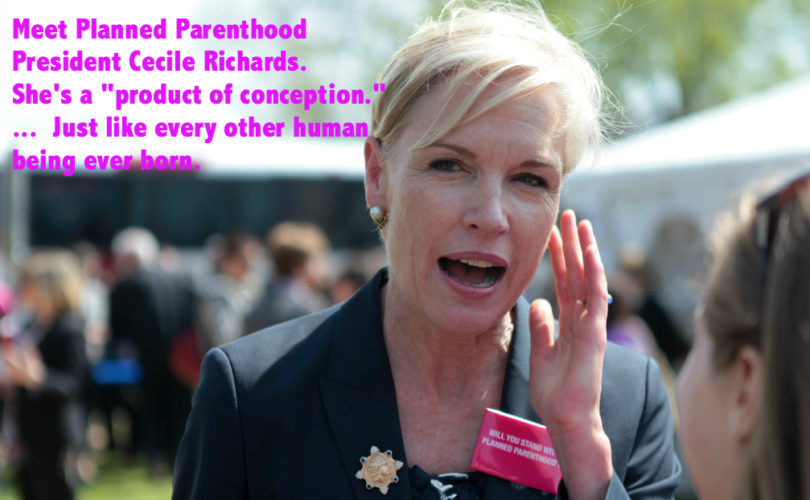 Annually, TIME hosts a “word banishment poll” in which the magazine asks its readers to vote on a word that should be trashed.

So, as we near the end of 2014, write in the comments below to let us know which pro-abortion phrase you think is most ridiculous or better yet, a blatant lie. For my part, it’s going to be hard to choose, pun intended.

Since pregnancy is also “terminated” (or “ended”) through birth, this is a deceptive way to describe abortion. Truthfully, abortion is a violent, cruel termination that often involves the sucking of fetal spines and the pulling apart of fetal bodies, limb by limb. Seems that honesty would require a more accurate description.

This phrase amounts to an odd myth. I’ve dedicated an entire article to explaining why here. Suffice it to say that fancy words do not a moral murder make.

As I wrote in a previous article for Live Action News:

It’s always been obvious that Planned Parenthood’s new and improved slogan, “Care. No matter what.” didn’t apply to all human beings. (Who could claim that sucking a baby’s spine from his body, ripping her limbs apart, stabbing poison into his heart, or ending her life in other violent ways is “caring”?)

You can read about how Planned Parenthood sends minor children back to their rapists here.

Well, I guess we’re all really just walking “products of conception,” when it comes down to it. Way to dehumanize and belittle the true value of life.

Under what form of humanity do we call taking the lives of innocent, helpless children “care”? Under what standard of decency do we call ripping babies from their mothers’ wombs “care”? No matter the reasons, subjecting a human being to a cruel and violent death is anything but “care.”

Except that it’s not. Is the mother’s body being sucked into a tube during an abortion? Are her hands, feet, and little legs lying piecemeal on a silver tray after an abortion? Do her hands clench and startle during an abortion? Does her body swim away, in utero, from the abortionist’s tools? Is  her face forever frozen by the terror of being hunted, attacked, and killed in a former place of peace?

Those who cry, “If you don’t have a uterus, zip it!” to pro-life men, are lightning fast to declare men who support abortion “bro-choice.” They celebrate pro-abortion men, even though many of them are caught abusing women and forcing abortions on them. Shaming men who want to save the lives of their children, is a real outrage. (For men who want to save their child from abortion, go here. And for women who are being abused or pressured by a bro-choice man, go here.)

One way pro-abortion proponents try to normalize abortion is by claiming that, over the course of their lifetimes, 1 in 3 women will have an abortion. They claim this should stop the “shame and stigma” surrounding abortion. Here’s the problem (in addition to the 1 in 3 claim being wrong): just because many people do something doesn’t make it right. If we believe that, we basically believe in mob rule. Whether one man or two million men were rapists, would it affect the wrongness of the act?

Ok, this one wins in my opinion. An unborn child, at no time, is merely a “potential life.” This phrase is baffling and unscientific. Countless medical textbooks inform us that, from the moment of fertilization, a new, whole, separate, unique, human being’s life has begun. There’s no “potential” about it; it simply is. “Potential life” doesn’t grow, move, and develop in a mother’s womb; real, actual life does that.