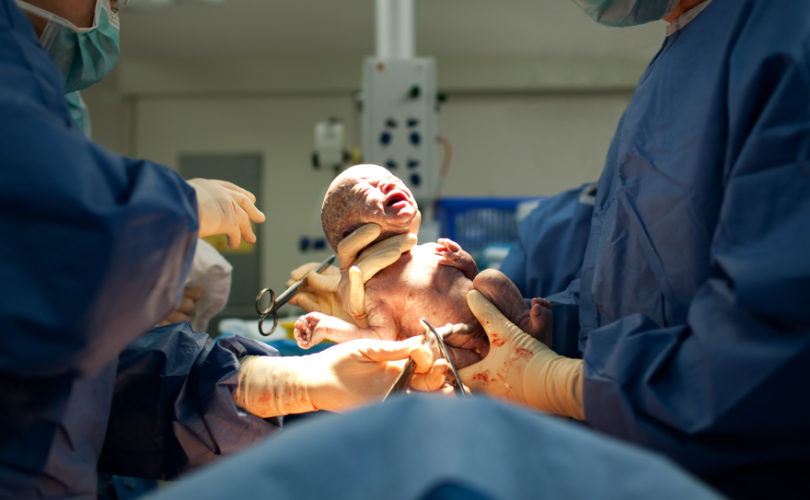 August 13, 2015 (CatholicStand) — Recently the investigative journalism conducted by David Daleiden who started the Center for Medical Progress has provided a raw look into the minds of the people involved in the “human capital” abortion industry. As the videos continue to come out and lawsuits are filed threatening to suppress free speech and journalism, perhaps this is a good time to look more broadly at the sale and use of aborted fetuses in scientific research.

They waited 10 minutes with the heart still beating and the fetus still moving … After 10 minutes, they cut the umbilical cord, dissected the brain and liver from the body of the fetus, and dropped the organs into liquid nitrogen to await analysis.

One does not need to conduct an undercover investigation to discover “human capital.” The facts are in the academic record, and they offer cold hard evidence that what Daleiden is revealing is not only true, but spans far, deep, and wide across time and locale.

The following information is just one example pieced together to demonstrate how ingrained this type of research is in the global scientific and industrial communities. Scientists are expected to provide meticulous accounts of their work for the sake of reproducibility and posterity. The language is thus very technical. Knowing how to read scientific literature means knowing how to decipher the scientific language. Please note: Because of the detail, however, the information in this case is also disturbing.

Let’s step through the facts.

In 1972, Pediatric Research journal published a paper submitted by researchers from the Department of Pediatric Research at New York State and Mount Sinai School of Medicine of the City University of New York in collaboration with a researcher from the Departments of Medical Chemistry and Obstetrics and Gynecology of the University of Helsinki in Finland. The paper was titled, “Development of Mammalian Sulfur Metabolism: Absence of Cystathionase in Human Fetal Tissues.” The fact that they used fetuses is stated right in the title. The researchers “examined the development of the transsulfuration pathway in 58 human fetuses obtained at therapeutic abortion during approximately the 2nd-6th month of gestation” as well as in premature and full term infants who died shortly after birth. They were trying to determine whether cysteine is an essential amino acid in “immature humans,” so they needed to analyze kidneys and brains at different developmental stages.

The fetuses presented a special test case. Since the fetuses were still alive at the beginning of the experiment in their mothers’ wombs, “in vivo” experiments were possible. This phrase “in vivo” is Latin and means “within the living.” With already deceased specimens, they could only measure the presence of amino acids after death. This type of analysis is an “in vitro” (in the glass, think in vitro fertilization) procedure. With the still-living fetuses, they could actually inject a known amount of amino acids, S-L-methionine and S-L-cysteine, “in vivo” into a living fetus and test how much of these substances were incorporated into fetal organs via the biological machinery of life over a set amount of time. The researchers therefore conducted the “in vivo” experiments by surgically cutting open the uterus of the mother, lifting out the living fetus with the umbilical cord still attached, and injecting the amino acids into the umbilical vein.

Then they waited 10 minutes with the heart still beating and the fetus still moving to allow the body to distribute and metabolize the amino acids. After 10 minutes, they cut the umbilical cord, dissected the brain and liver from the body of the fetus, and dropped the organs into liquid nitrogen to await analysis.

Here is the relevant description from the Methods and Materials section:

For “in vivo” experiments, each fetus immediately after removal from the uterus was injected with approximately 100 uCi of either 35S-L-methionine (specific activity 515 mCi/mmole) or 35S-L-cysteine (specific activity 31.3 mCi/mmole) contained in 0.5 ml of a 0.9% solution of NaCl at pH 7.0. In some experiments, unlabeled cysteine (2.0 /xmoles L-cysteine in 0.2 ml 0.9% NaCl, pH 7.0) as well as 35S-L-methionine were injected. All injections were made into the umbilical vein through a short Teflon catheter which was then rinsed with 0.2 ml 0.9% NaCl; the whole cord was clamped on the fetal side of the point of entry of the catheter to prevent blood loss during the experiment. After 10 min (elsewhere in the paper, “in all cases the heart continued to beat during the 10-min period and spontaneous movement was seen”), the cord was severed close to the fetus, and as much blood as possible was collected into a tube which contained heparin as anticoagulant. The fetal organs were quickly removed and dropped into liquid nitrogen.

The research was funded by the Lalor Foundation in Boston, Massachusetts, the New York State Department of Mental Hygiene, and the Association for Aid of Crippled Children also in New York. The abortions appear to have been done at the Central University Hospital and Borja Womens Hospital in Helsinki, Finland because an end note offers thanks to the staffs there. A shorter communication of this work was also published in Science journal, “Absence of Cystathionase in Human Fetal Liver: Is Cystine Essential?” Science journal is arguably the most prestigious journal to have your work published in because it is not specialized in any one area and only publishes the best work across all scientific disciplines.

Among the details in the paper was the anesthesia procedure for the women. “Preoperative medications included Pethidine, 50-75 mg; Phenergan, 25 mg; and atropine, 0.5-0.8 mg intramuscularly. Anaesthesia was induced with 250-440 mg Pentothal intravenously and was maintained with N2O2.”

Not all the details regarding the women were recorded though. According to the Pediatric Research paper, the “mothers” (the authors called them “mothers”) were in good health but sought abortion for “social or psychological reasons.” The “mothers” apparently agreed to undergo “hysterotomies,” which seems odd. A hysterotomy is a surgery where an incision is made in the uterus, usually done for Cesarean birth or fetal surgery. A hysterotomy is a much more invasive procedure than a suction-aspiration procedure, which was certainly available in the 1970’s. Safe abortions (for the mother) are ones that reduce the risk of perforating the uterus as much as possible and reduce the risk of infection. It does not make sense to unnecessarily cut open the uterus and leave it open for an extended period of time if the safety of the mother is the first concern.

The research paper did not mention whether the mothers gave consent or were informed of the procedure. One might wonder if the mothers were told that, while they were unconscious with their abdomens laid open, their unwanted children were used as living biological machines in the only 10 minutes they would live outside the womb. It is hard to imagine that any woman would agree to such an experiment regardless of how much she did not want to be pregnant or raise a child.

The goal of this 1972 paper was to demonstrate that cysteine is an essential amino acid in human fetuses and in infants for some time after birth. The end use of this work was to provide information about feeding newborns. In the conclusion, the authors noted that “infants of low birth weight who are fed a formula with the same quality of protein as that in human milk should grow as well.” (Proteins are large biomolecules made of long chains of amino acids.) The experiment was part of a broader set of experiments to understand the kind of protein newborns need to be fed in milk formulas. By understanding the differences in how fetuses process amino acids compared to infants and children, the researchers sought to better design infant formula especially for prematurely born infants.

The two researchers from the New York, John A. Sturman and Gerald E. Gaull, continued their work in the coming years using fetal brains, sometimes whole. Their work was funded, in part, by the National Institute of Health Clinical Genetics Grant and the New York State Department of Mental Hygiene. In 1974, they published “Polyamine Biosynthesis in Human Fetal Liver and Brain” in Pediatric Research. In that study they used many of the same samples used in the previous study. Their interests were neurological.

The Finnish researcher who was interested in infant nutrition, Niels C. R. Räihä, published “Phenylalanine Hydoxylase in Human Liver during Development” in 1973 using the livers of 18 human fetuses from 2nd-6th month of gestation. Räihä continued his work until 1985, collaborating with 55 other co-authors from around the world and publishing some 41 papers, according to internet sources.

In 1993, Räihä served as Editor of the proceedings from the Nestlé Nutrition Workshop Series held that year in South Africa by the Nestlé Corporation. The collection of chapters, which was published in 1994 and titled Protein Metabolism During Infancy (Nestle Nutrition Workshop Series: Pediatric Program), reviewed the “protein requirements of low-birthweight, very-low-birthweight, and small-for-gestational-age infants and the essential amino acid requirements of infants with inborn errors of metabolism.” The book also focused on the quality of protein in human milk and formulas, the digestibility and absorption of protein in infants, and the role of essential and nonessential amino acids in neonatal nutrition. Hence, the experimental procedures describe above have a connection to the Nestlé Corporation and development of infant formula.

Fetuses: The Value Chain Is Much Larger

If the language of the Planned Parenthood and biotech executives discussing the demand for fetal body parts over wine and salad for lunch is disgusting, perhaps one will find the experimental methods tied to the history of the development of infant formula equally, if not more so, disgusting. These facts have been in the academic record for over 40 years. Was there no outcry? No controversy? What? Did people just trust the academics blindly? I do not know. A million questions can be asked about why anyone thought this kind of research was remotely acceptable. Yet, here we are in 2015 in shock as if all of this behavior began overnight, speculating about whether it is all really true or not. It is true. Those “in vivo” experimental procedures are not speculation, indication, or accusation. They are as true as if the researchers confessed the activities to the public in their own handwriting—because they did.

If the published works in refereed journals are to be believed, then abortion clinics have indeed provided whole live fetuses for research, even live ones handed over to be used, killed, and dissected as a part of an experiment that feeds an industry. Apparently for decades the use of fetal material has been a research tactic that is 1) considered ethical and legal, 2) coordinated across continents if necessary, 3) funded by governments and private foundations, 4) demanded by industry, and 5) applauded by the scientific community. Planned Parenthood could shut down completely tomorrow, but the use of aborted fetuses and fetal body parts will not stop.

The value-chain, so to speak, is much longer and affects more aspects of modern life than any of us may yet realize, and Planned Parenthood is but one link. Again, this is only one example. There is more. So while the Center for Medical Progress continues to expose Planned Parenthood’s involvement, I will continue to back it up by exposing what is in the scientific literature.

Editorial Note:  Dr. Stacy A. Trasancos, PhD is solely responsible for the accuracy of the facts in this essay. If you believe anything is in error based upon her reading of the publicly available literature, please email her here. Dr. Trasancos is available for interviews.

Reprinted with permission from Catholic Stand.