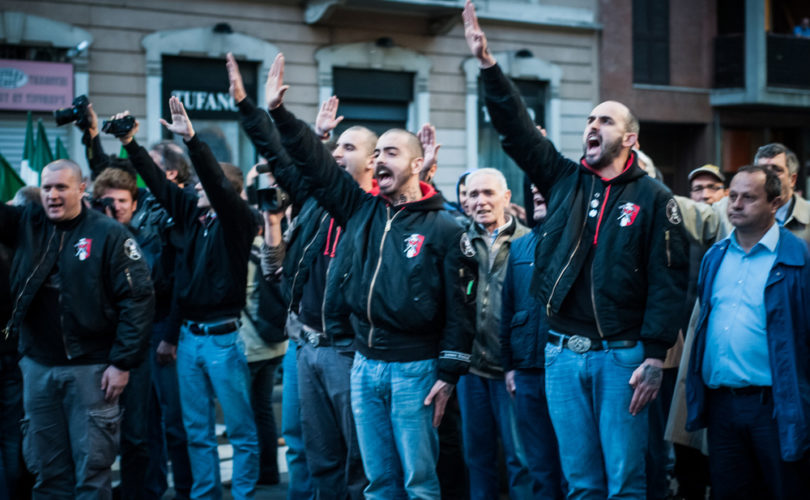 The Gestapo in Nazi Germany entered Jewish-owned shops to intimidate and demolish them. To do so, they had the full support of the state, the courts and the media to carry out their mission. Today, we are witnessing a similar attempt in Canada, the U.S. and the U.K. to intimidate and demolish businesses — only this time, it is not Jews who are being persecuted, but Christian men and women.

Today’s apparent Gestapo are the fringe extremists in the homosexual movement and their supporters, who target Christian businesses, such as flower shops, print shops, bakeries, church halls, etc. to demand they supply services for their same-sex activities, such as same-sex marriages and receptions: These activists do so with full knowledge that the owners of these shops would be in contravention of the principles of their Christian faith.

When refused the service, the activists then report to the Human Rights Commission and lay a complaint of discrimination against the offenders, knowing that the Commission will obligingly accept their complaint, and inevitably fine the Christian businesses. The punitive fines are designed to put the Christian shops out of business. If the shop owner appeals to the courts, the latter, with rare exceptions, support the discrimination order and the imposition of fines.

The media, of course, huff and puff indignantly at the grossness of the supposed offence, and support the complainants. In short, the entire apparatus of the state, together with the media, fully support the persecution of the Christian business owner who only wishes to live by his/her faith. There is no attempt to balance
the harm caused to the integrity of the Christian individual forced to act contrary to his conscience, as opposed to the temporary inconvenience caused to the same-sex couple, who can easily obtain the desired services elsewhere.

The Falseness of The Supreme Court of Canada

The Supreme Court of Canada has declared that there is supposedly no hierarchy of rights under Canada’s Charter of Rights. However, time and time again, in practice, it has ruled otherwise: freedom of religion, written into the Charter in two different sections by Parliament, has been pushed aside by sexual orientation, that was, in fact, imposed on the public by being written into the Charter by the whim of the court and included by way of a profoundly undemocratic procedure in the Canadian Human Rights Act under Liberal Minister of Justice Alan Rock.

Further, not only is it unwise to deny services to homosexuals contrary to one’s religious faith, it is also unwise to express any opinion at all opposing the homosexual agenda. In the Whatcott case (2013), even though Mr. Whatcott presented carefully researched statistics showing a higher incidence of pedophilia among homosexuals than among heterosexuals, the Supreme Court of Canada declared such evidence as “hate” and found Mr. Whatcott guilty of distributing hate literature contrary to the Criminal Code.

The court also decided that although Biblical passages, beliefs and principles may be expressed, this did not mean that religious interpretations of these principles cannot be considered “hate”. That is, a pastor claiming that homosexuality is a sin and a destructive and evil force in society may be regarded as promoting hate. This Supreme Court decision also denied the Christian belief that one can “hate the sin, not the sinner” as a defence in a “hate” crime. In effect, the Supreme Court held that criticism of a lifestyle can now be treated as hateful speech against homosexuals, even though there is no actual “hate” being expressed.

An example of a fabricated 'hate' occurred in August 2013 when REAL Women objected to the Minister of Foreign Affairs, John Baird, funding, with tax-payer’s money, a homosexual activist group in Uganda. We also questioned the Minister’s attempt to force western policies on homosexuality on Third World countries, contrary to their faith and culture.

As a result, homosexual activists and the media descended on REAL Women with a vengeance. However, we were not swayed by their attempt to intimidate us. REAL Women is still in business and continues to speak out on the inconvenient truths of homosexuality and other issues.

The horrendous attack on the Christian Trinity Western University, located in Langley, British Columbia, for establishing a law school, is yet another disgusting example of the Gestapo and its supporters at work. Trinity Western requires its students to sign a “covenant” pledging to reserve sexual intimacy for marriage, and has defined marriage as a union between a man and a woman. Such a statement was intolerable to the fringe extremists who set about to destroy the emerging law school.

When the benchers of the B.C. Law Society decided to accredit the new law school despite this pressure, the attackers then turned to the provincial law societies demanding they prohibit graduates of the Christian law school from practicing law in their respective provinces.

An incredible attack on Christianity by the Nanaimo B.C. City Council took place on May 5, 2014. It is a day that should stand out as a Day of Infamy in Canada. On that day, a Council member, Fred Pattje, introduced a surprise motion to cancel the agreement the Council had made, to rent out the City owned Vancouver Island Convention Centre, for the live video link to a major US-wide conference to take place four days later on May 9.

The conference, called “Leadercast”, based in Atlanta, Georgia, had scheduled world-class speakers, such as former First Lady, Laura Bush and South African Nobel Prize laureate Bishop Desmond Tutu to discuss leadership, not homosexuality. The Nanaimo Council took offence, however, that this leadership conference scheduled to be podcast, had, as one of its sponsors, a U.S. restaurant chain, Chick-fil-A, whose CEO had publicly supported marriage as a union between one man and one woman.

According to the Nanaimo councilors, who voted 8 to 1 to cancel the agreement, the city must ban “any events that are associated with organizations or people that promote or have a history of divisiveness, homophobia, or other expressions of hate.”

According to another councilor, Jim Kipp, banning the event was no worse than banning an organized crime ring, and the Christian view of marriage should “almost be a criminal point of view in this day and age.” He also stated that the proposed event was comparable to the Nigerian terrorist group Boko Haram.

The mainstream media ignored the bullying tactics by this wildly bigoted city council. It was the conservative Sun News commentator, Ezra Levant, who publicized this anti- Christian flame-out. He also drafted a petition demanding that the ban be repealed. Mr. Levant’s Sun News Network TV show on the subject went viral. The Nanaimo City Council was picketed and objections poured into the council. A lawsuit was threatened by lawyer, John Carpay, a leading civil liberties lawyer with the Justice Centre for Constitutional Freedoms.

In view of the barrage of condemnation by the public on this ill-considered, bigoted motion, the Nanaimo City Council, on July 3rd, 2014, repealed the motion. The damage, however, had been done as the local presentation of the conference was cancelled, at a financial loss.

How much longer will decent citizens permit the homosexual Gestapo to dominate their personal faith and morals? Such outrageous behavior has to be stopped.

We can no longer remain as silent witnesses or victims of these bully tactics being used to control our faith and public behavior. The longer the bullying continues, the bolder these bigots will become.

Republished with permission from the September 2014 REAL Women of Canada Newsletter, Reality.