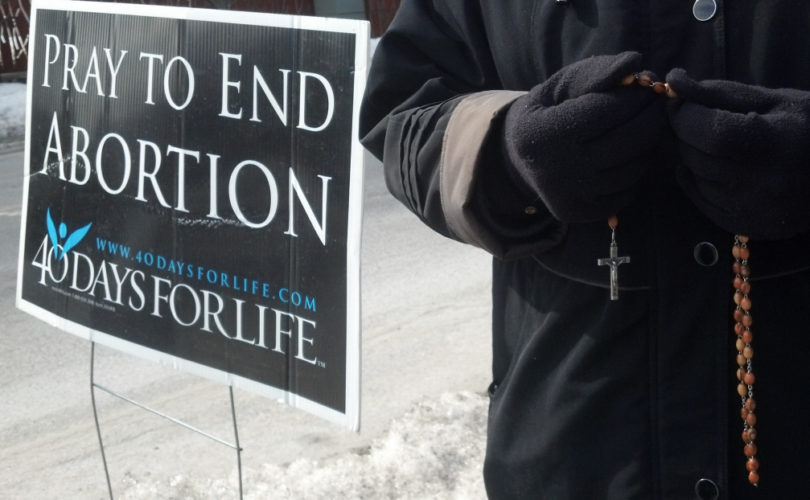 It would have been a surprise indeed in today’s Britain if the court had recognised the right of a few to carry on with their prayerful vigil against the legal killing of so many.

If the decision had gone against the United Kingdom’s multi-million pound abortion industry and its never-ending need for new business, then a more fundamental question would have been posed about what was taking place inside such places as the abortion center at Ealing.

That was never going to be allowed.

Remember, this was the same court that earlier this year refused the parents of Alfie Evans when they begged to take their child to be cared for in Rome.

No, the few visible witnesses outside an abortion facility are an uncomfortable reminder of what we all know – even those who had organised a noisy counter-demonstration against Ealing’s 23-year-old peaceful pro-life vigil – namely that abortion involves the ending of an innocent life.

Marie Stopes International (MSI) operates the abortion facility in Ealing. That abortion center is one of the busiest in the UK. In 2016, 6,484 abortions took place there, 110 after 20 weeks gestation.

A 2017 U.K. government report found evidence of nearly 400 botched abortions at MSI facilities nationwide over a two-month period. In March 2017, an undercover reporter for The Daily Mail found doctors at MSI facilities approving thousands of abortions without meeting women and with some consultation discussions lasting just 22 seconds.

In October 2017, another Care Quality Commission report revealed that MSI staff felt “encouraged” to ensure women went through with abortions because it was “linked to their performance bonus.” Government Inspectors found evidence of a policy – in place across all 70 U.K. MSI facilities – whereby staff were told to call women who had decided not to have an abortion and offer them a new appointment.

Just this year, the same facility in Ealing hit the headlines for different reasons.

On May 1, 2018, a London coroner criticized repeated failures there following the death of a woman. This occurred in 2012 when a woman died in a taxi after having an abortion at the Ealing facility. Subsequent to the death, a doctor and two nurses attached to the Ealing facility were charged and then later acquitted of manslaughter. The previous year, in 2011,  a doctor was struck off the U.K.’s General Medical Register after having performing a botched abortion in Ealing. As well as a perforated uterus, the doctor had left parts of the foetus inside a woman. Subsequently, she was hospitalized in critical condition for two months.

The coroner’s remarks in the above case came just one week after Ealing Council became the first U.K. Local Authority to approve and then enforce a Public Spaces Protection Order (PSPO) for the area around the Ealing abortuary. The purpose of the order being issued was so as “to protect women from distress and intimidation.”

Ealing council had unanimously approved the PSPO. Abortion providers and their supporters convinced local government officials that such “buffer zones” were necessary. These groups painted a picture of “groups” approaching women as they entered the facility and then either showing them explicit pictures of aborted babies or calling them names. Some even claimed that the very act of peaceful protest outside an abortion facility was an act of intimidation. Ealing council’s politicians seemed to have listened to only one side of the story.

Seemingly irrelevant was the incontrovertible fact that at the Ealing vigil there had not been a single arrest or a prosecution for any offence in its 23 years.

One can only surmise that the council officials were unclear as to what the vigil actually was. Having been there I can confirm that it consisted of a handful of mostly elderly people praying. Some, one or two, would offer leaflets to those women entering the facility. Most of those on their way in refused to accept the leaflet, which, of course, was their right.

At no time did I see any attempt to “force” anyone to take a leaflet. In any event, such coercive behaviour would be wholly counterproductive given what was being offered. The leaflet simply outlined the mostly practical help available for women who find themselves with an unwanted pregnancy.

There were some images of unborn babies outside the facility, mostly displayed on the grass in front of it, and, if anything, easy to miss. They were standard medical illustrations of the kind seen after a scan or on a pregnancy app. I saw nothing other than images of healthy babies in the womb.

Due to groups such as Good Counsel Network and 40 Days for Life, these vigils have borne fruit. Some women did decide to carry on with their pregnancy. Having had the pleasure of meeting some of them, I can confirm that today they are, without exception, all proud mothers.

As the news from the High Court filtered through today, the various abortion providers expressed their “delight” at the court’s finding. They also talked of “Ealing today, the rest of the U.K. next.” Sadly, this is what this is all about. These abortion providers are running a business. Every mother who keeps her baby is a financial cost to an abortion center if they have booked that mother in for an abortion.

Behind a smoke screen of “rights” and talk of “fear and intimidation,” there is a grubby lobbying campaign underway to convince Ealing and other local authorities to ban freedom of speech, freedom of assembly, and even the right to pray on a British street for the sake of abortion centers, their profit margins, and the trade they ply.

This is but the start of a new front opening in the coming battle ahead. It is one aimed at silencing and side lining the pro-life movement using courts and local politicians. The push for this comes from the abortion industry. It is yet another example of the increasing power, both political and financial, of such groups. According to the U.K.’s Charity Commission, in the financial year ending in 2016, the income for Marie Stopes International alone was £290 million/ $400 million.