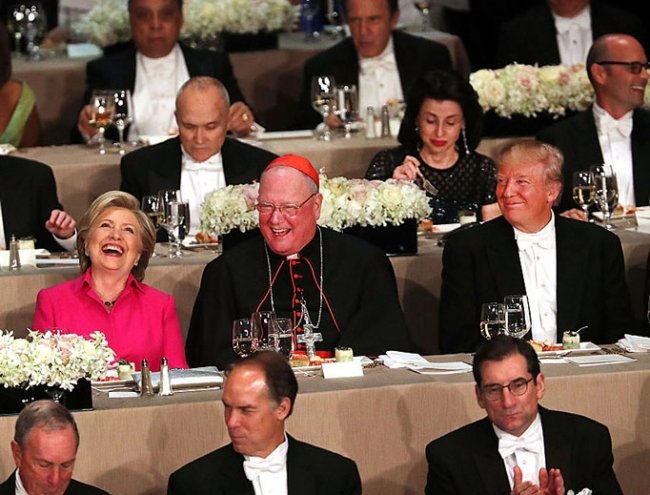 November 4, 2016 (NCRegister) — I am supportive of those who are calling for an end to the Al Smith Dinner and other similar events. There was a time that these gatherings made sense. But that time, I would argue, is long gone. George Weigel recently wrote:

The Al Smith Dinner seems based on the premise that the old ethnic transmission-belt by which the faith was passed on to new American generations for centuries still works. But it doesn’t. … Now, its tribalism and its seeming indifference to grave moral issues are an impediment to the New Evangelization. The Al Smith Dinner has become the Al Smith Embarrassment. It’s time to give thanks for what it once did – and then give it a decent burial.

Archbishop Charles J. Chaput, though not referring specifically to the Al Smith Dinner, said something similar:

If we want to reclaim who we are as a Church, if we want to renew the Catholic imagination, we need to begin, in ourselves and in our local parishes, by unplugging our hearts from the assumptions of a culture that still seems familiar but is no longer really “ours.” It’s a moment for courage and candor, but it’s hardly the first moment of its kind.

In other words, as both these quotes suggest, we used to think that going out and befriending the culture, “killing” our opponents with kindness, and reassuring them that we were true Americans (and not denizens of some foreign power), would help build bridges and open the door to evangelization. If this ever was true, it is not so today.

Rather, we look compromised, even pitiful. We do not look strong and are not seen as shining the light of biblical truth on an often skeptical and cynical world. We look instead to be desperate for approval and money, in the form of donations. Our opponents have the upper hand in these glamorous gatherings, not we.

St Paul once warned: Do not be unequally yoked with unbelievers. For what partnership can righteousness have with wickedness? Or what fellowship does light have with darkness? What harmony is there between Christ and Belial? …“Therefore come out from among them and be separate, says the Lord. Touch no unclean thing, and I will receive you.” (2 Cor 6:14-17)

While we ought not be unkind or hostile to our current culture and its leaders, neither should we be obsequious or allow our faith to be compromised or suppressed in order to gain access to their approval, money or power.

When I wrote on this in the past, and even engaged the matter more recently on Facebook, many were supportive. But a substantial minority dismissed my concerns such as those listed here and insisted that Jesus ate with sinners.  This retort implies, or outright asserts, that I and others who agree with me are like unto the Pharisees of old who took false scandal and cried out, concerning Jesus: “This man welcomes sinners and eats with them!” (Luke 15:2).

It is true that Jesus ate with sinners. But of course, he was not easily compromised. Most of us (if not all of us) have nothing near the moral rectitude and integrity of Jesus. He had a perfect humanity and even his opponents had to say of him: Teacher, we know that You are honest and are swayed by no one. Indeed, You are impartial and teach the way of God in accordance with the truth. (Lk 12:14) Yes he did. He never compromised the truth to gain admittance or any worldly accolades. But most of us do.

It is one thing for Jesus to dine with sinners. It is another thing for us to do so. Compromise was impossible for Jesus — but it’s possible, even likely, for us. I am dubious that most any of us could possess the kind of integrity that Jesus had. So telling me that Jesus ate with sinners, so we can too, is to presume an equality and integrity that too many of us lack.

Secondly, and by way of illustration of the first point, at none of the dinners with sinners is it attested that Jesus just politely affirmed sinners and overlooked (or remained silent to) faults and outright evil views and acts — as do many of our modern dinners, parades and bestowals of honor.

No indeed. Jesus confronted sinners and, by parable and admonition, summoned sinners to repentance. And while we do not have the full discussions that took place at every meal, we do have a lot preserved of the discussions. Jesus used such dinners to rebuke and teach, and to summon to repentance:

And these are just a few examples of the vigorous teaching and admonition that Jesus demonstrated at these meals with sinners. None of these meals is without instruction, admonition and outright rebuke.

If our dinners, parades, fundraisers, ribbon-cuttings and bestowing of honors had this quality, no objections should be raised. But I have seldom if ever observed this stance. More often there is no rebuke or even mention that many present at these functions are guilty of the most egregious views that have resulted in the death of tens of millions of infants, immorally redefined marriage, and now seek to usher in more deaths through euthanasia. This is not evangelization. It is a countersign. It sends a signal that we are not all that serious about what we call our most cherished teachings and views.

Yes, it is time for such things to end. It is time to unplug from this culture (if it even deserves that title any more). The Church must be the Church, if there is going to be any culture at all. Building bridges presupposes that there is some common ground on the other side to reach. This premise is fast disappearing, if not already gone.

Our stance now must consistently be the first kerygma, pure and simple: Repent and believe the Gospel!

Reprinted with permission from the National Catholic Register.