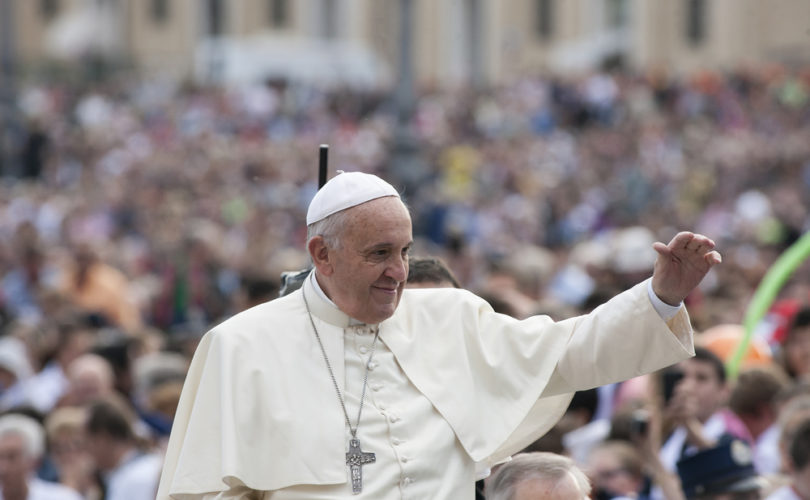 March 24, 2016 (Rorate Caeli) — In this Holy Week of 2016, the sentiments and pain of Christ’s Passion being renewed is mingled with deep apprehension about the distressing situation the Church is in. The greatest worries regard the impending Apostolic Post-Synod Exhortation Pope Francis signed on March 19th and which will be published just after Easter. According to the Vatican journalist Luigi Accattoli “rumors foresee a text of no striking doctrinal or juridical affirmations, but rather will include many innovative practical choices regarding marriage preparation and couples in irregular situations: not only for the divorced and remarried but also for cohabiters, marriages with a believer and non-believer and for those only civilly-married.” (Corriere della Sera, March 20th 2016)

What will these “innovative practices” be? The document’s key word is “integration”. Those who are in an irregular situation will be “integrated” into the community: they could become catechists, liturgical animators, godparents for Baptism and Confirmation, best men/bridesmaids at weddings and so on; all activities the traditional praxis of the Church to this day has forbidden them owing to their state of public sin. Yet, Alberto Melloni writes in “La Repubblica”, March 19th “on Communion for the divorced and remarried no novelties are expected. Seeing as the problem is to legitimize a praxis (…), not establish it theologically”. The document does not anticipate a “general rule” of access to the Eucharist, but would allow confessors and individual bishops to permit admission to the Sacraments “case by case”. The novelty, Melloni explains, is based on facts not on words, “by giving responsibility and restoring effective powers to bishops, marking, as Cardinal Kasper said, a real “revolution”.

Let’s imagine someone said: morality exists, but let’s act as if it didn’t. Morality being the norm of human conduct, this would be an invitation to a society without rules: a veritable Far-West morality, in which everything is allowed, as long as it not theorized. Jesus said, “Whoever loves me keeps my commandments” (John 14,21). In a case like this, in the name of a false, merciful love, God’s commandments would be violated and we would make a mockery of Him. And yet this is exactly the “legitimatizing of praxis” scenario that Melloni hopes for.

If the rumours are true, those who are in a situation of public and permanent sin, could rise to the role of witnesses, guides and educators in the Christian community. This would evidently mean not only for the divorced and remarried but for public cohabiters of every kind, heterosexual or homosexual, indiscriminately. Will it be possible to apply “the hermeneutic of continuity” to a document of this type, meant as an attempt to retain every act or word from the ecclesiastic hierarchy conformable with Tradition, whatever they are? For there to be continuity with the past it is not enough to reaffirm the indissolubility of matrimony. The continuity of doctrine is demonstrated through facts not words. Confronted with these novelties in praxis, how can it be said nothing will change? And how can the hermeneutic of continuity be proposed when it has already failed as far as the Vatican II documents are concerned?

In his discourse to the Roman Clergy on February 14th 2014, Benedict XVI, the most authoritative promoter of the hermeneutic of continuity, admitted the debacle of this interpretation of the events. His abdication from the pontifical throne was first of all, the defeat of his tentative to stem the post-council’s religious and moral deviation by placing it on a level of pure theological and hermeneutical debate. When the same Benedict XVI moved from the hermeneutical level to that of the facts, in conceding the Motu Proprio Summorum Pontificum, he won the battle. And Summorum Pontificum represents the highest point of his pontificate.

Those who use the hermeneutic method, need to accept the possibility of different interpretations of the same text or event. If the plurality of interpretations is denied, by affirming that a document or a papal act must necessarily be read in continuity with the precedent Magisterium, the hermeneutical method is in itself rendered futile. The rule of interpretation, moreover, as is that of every human act, is the search for what is true, not for what is convenient. For this, the distinction between the infallible and the non-infallible Magisterium, that admits the possibility of errors by the supreme Pastors of the Church, is the only thing that helps us to understand the existence of divergences among magisterial documents.

If all the documents of the Magisterium said the same things and could never enter into contradiction with each other, the words themselves would lose meaning. The objectivity of the texts would be substituted for the dialectical ability of the hermeneut, capable of reconciling the irreconcilable. But who would interpret the interpretation of the hermeneut? The process is interminable and every hermeneutic is, as the German philosopher Otto Friedrich Bollnow says, an “open form” which can contain everything, as the barycentre is moved from the ‘known object’ to the ‘knower subject’. On the other hand, hermeneutics need obscurity and prosper only in the lands where the sun of clarity does not rise.

The Post-Synod Exhortation will not contain “any split” declares Alberto Melloni. The Pope, knowing well the tight boundary that separates heresy from orthodoxy, does not cross this red line, but places himself in a grey zone, avoiding that fatal step Melloni defines as “the breach”. However, for a document to be bad it is not necessary that it be formally heretical, it is sufficient for it to be deliberately ambiguous and, in its obscurity, near or inductive to heresy. Between truth and error, ambiguity does not constitute an acceptable tertium genus, but an obscure area which must be clarified and defined. A good document may contain some equivocal passage, which will need to be interpreted in the light of the general context, but if the obscure zones prevail over the light zones, the message can be nothing other than untrustworthy and unwholesome.

Two years have passed since Cardinal Kasper initiated the synod-debate and the same Kasper is chanting victory today by using the same formula he offered on February 20th 2014: “Doctrine doesn’t change, the novelty regards only pastoral praxis”. Has Kasper really won his battle? In the next few days, we hope with all our heart that our worries are proved wrong by the papal document. Yet should they be confirmed, we hope fervently that those Shepherds of the Church who have sought, over the last two years, to block the way to Kasper’s ideas, now express their opinion clearly on the Post-Synod Exhortation. The text to be published is a pastoral document with no intention of formulating doctrine, but rather, of giving indications for actions.

Should these indications not correspond to traditional Catholic praxis, this will need to be said with respectful candour. More than a million Catholics addressed a “Filial Appeal” to Pope Francis, asking him for a clear word on the grave moral problems currently on the table. If this word does not come from the Apostolic Exhortation, we ask the Cardinals who elected him to pronounce it; they have the power to reprimand him, correct him and admonish him, given that nobody may judge a Pope, unless, as the Medieval canon lawyers taught, he departs from the right path of the orthodox faith (Gratianus, Decretum, Pars I, Dist. XL, c. 6).

Reprinted with permission from Rorate Caeli.