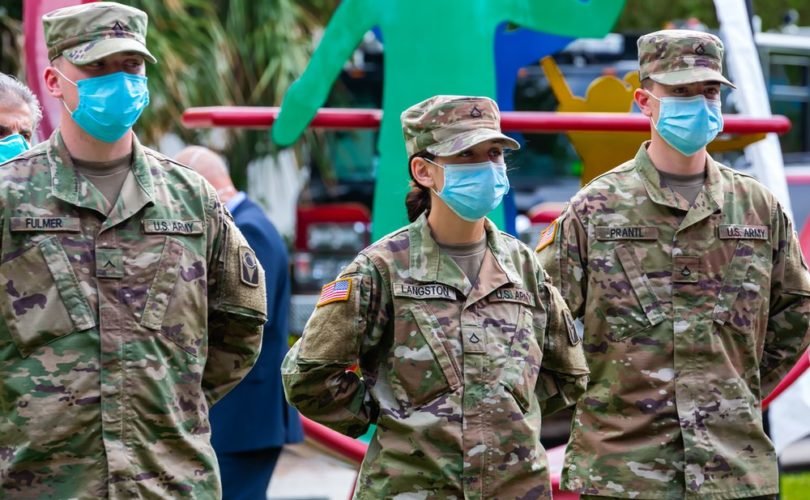 WASHINGTON, D.C. (American Thinker) – A manufactured panic over the January 6 rally has provided Biden and his flunkies with an excuse to attack the U.S. military.  The Biden administration has implemented an effort to root out political “extremism” in the military in order to work toward a military with more ‘diversity, equity, and inclusion’, despite little evidence of any such extremists actually operating within the ranks:

“But a large majority of those charged have no known connections to established extremist groups… Experts say there’s little evidence that current or former members of the military are more susceptible to radicalization than the general population.  Still, Secretary of Defense Lloyd Austin has called combating extremism in the ranks a top priority.”

So let’s examine what Austin has done.  As head of the Department of Defense (DoD), Austin created the Countering Extremism Working Group (CEWG).  However, the potential unintended consequences of its anti-extremism effort could harm recruiting if religious Americans or those on the political right feel unwelcome in the military ranks.  The DoD’s definition of extremism is so broad and imprecise that some retired officers and military analysts fear it could inadvertently include traditional Catholics, Republicans, and people who aren’t racist or violent but simply choose conservative, pro-life politics.  For example, DoD considers “‘patriot’ extremism” to include any non-extreme position, such as conservative views, religious teachings such as those against abortion or LGBTQ lifestyles, and failure to actively support gay rights demonstrations or mandatory COVID-19 vaccinations.  They are therefore legitimate targets for the CEWG.

Further, as a Revolver article says, if one accepts the DoD’s ‘diversity, equity, and inclusion’ policy as a matter of national security, any conviction that doesn’t agree with Biden’s (or Austin’s) perspective of diversity, equity, and inclusion in the military can be considered a national security threat.  Thus all policies and personnel that supported Donald Trump’s border wall, illegal alien deportations, DACA criticism, the military’s transgender ban, and military bases named after Confederate generals can be considered an extremist and a threat to national security.  The CEWG is a mechanism for eliminating in the military anything or anybody Biden (or more likely his flunky Austin) doesn’t like.

Let’s look further into the CEWG. “The CEWG will be led by Mr. Bishop Garrison, Senior Advisor on Human Capital and Diversity, Equity, and Inclusion.”  Just who is Bishop Garrison?  He is a 2002 graduate of the U.S. Military Academy at West Point, the College of William and Mary Law School, and the Sorensen Institute for Political Leadership’s Political Leaders Program at the University of Virginia.  He earned two Bronze Stars, a Combat Action Badge, and a Meritorious Service Medal.  He is also an Operation Iraqi Freedom Army veteran. Garrison was a member of the Obama 2012 Re-election Campaign, the Obama Administration’s National Security Leadership Workshop as well as Advisor to the Science and Technology Directorate at the Department of Homeland Security.  He served as the Deputy Foreign Policy Adviser on the Presidential campaign of Secretary Hillary Rodham Clinton.  His Democrat credentials are impeccably well established.  And he was appointed by Austin.

Garrison’s West Point major was Pre-Law.  He holds a J.D. as well as a Political Leaders Program certificate.  I found nothing that qualifies him to be a Senior Advisor on Human Capital and Diversity, Equity, and Inclusion.  Perhaps his study of law qualifies him.

Garrison, in July 2018, wrote: “America again finds itself at the precipice: what nation do we want to be?  What world do we want to live in?  This is no longer some metaphysical hypothetical meant to test the limits of our philosophical thinking.  It’s a real and tangible question.  Our history is plagued with ugly, vicious truth.  Our past is troubled by violence and hatred.  But our evolution has always been about our struggle towards a more perfect union, our effort to be something greater holistically than we have been historically.  Today, however, America is renouncing its position as the world leader.  We’re relinquishing the long-fought diplomatic collateral that has defined our security and western world stability since World War II.  If we allow this digital black plague to spread further, the shining city on the hill will undoubtedly find itself alone in the darkness for years to come.”

This passage provides Garrison’s view of this country, especially the final three sentences. But that isn’t the worst of it.  Garrison, in July 2019, tweeted that “…any supporter of former President Donald Trump unequivocally supports extremism and racism.  Support for him, a racist, is support for ALL his beliefs.  …He’s dragging a lot of bad actors (misogynists, extremists, other racists) out into the light, normalizing their actions.  If you support the President, you support that… There is no room for nuance with this.  There is no more ‘but I’m not like that’ talk.”

Fox News host Pete Hegseth said this about Bishop Garrison: “This is not the woke military stuff you have been hearing about.  This is not extremism stand down or a social justice reading list or even a foolish CIA recruitment video we have all seen by now.  This is worse.  This is way worse.  This, my friends, is a purge.  A purge of the Defense Department led by a new and now powerful radical leftist.  A 1619 project activist [he defended it against criticisms from historians, called their assessment extremism, racist policies, and white supremacy existential threats to the nation], a hard-core social justice Democrat.  A man who believes all, all Trump supporters are racist and extremists.  And what must we do to racists?  We must define them and then we must purge them.”

Are Garrison and CEWG needed?  No!  Of the 222,000 men and women in the Marine Corps, it discharged four members last year for extremist activity.  American Defense News managing editor Paul Crespo had this to say:  “To date [22 April], despite the massive ideological witch hunt and outrageous, fact-free partisan allegations, less than a handful of active military members have been identified as having any real ‘extremist’ affiliations, out of nearly one and a half million serving today.”

DoD spokeswoman Lisa Lawrence said, “The Department is focused on addressing the corrosive and potentially dangerous behavior that can be inspired by extremist ideology — behavior that harms good order and discipline and our readiness.”  But the DoD has yet to provide (if it can) any data to show where even one extremist threat exists in our military, or how it is harming ‘good order and discipline and our readiness.’