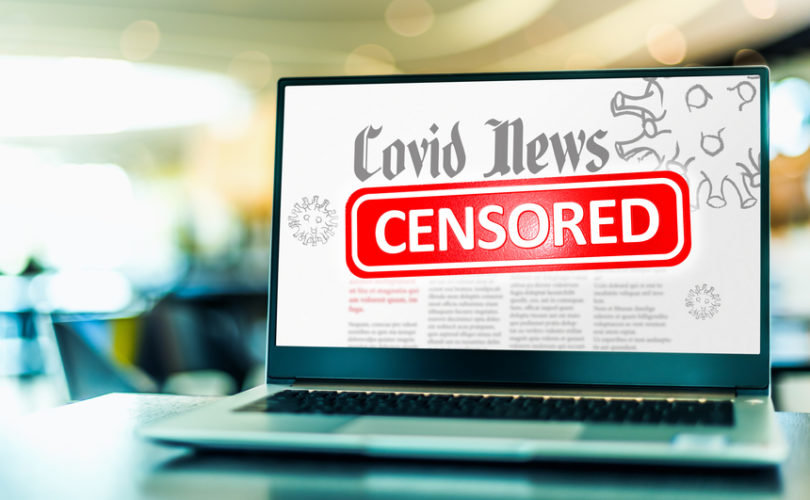 April 20, 2021 (The Dossier) – At the turn of 2020, the novel coronavirus that originated in Wuhan, China rapidly took its place atop the global information stage, and it wasn’t because people suddenly became interested in respiratory diseases. Supercharging this process was the breathtaking, horrifying photos and videos coming out of Wuhan. What we were seeing through the lens of social media appeared to be an Ebola-like plague, something so horrifying that it seemed to belong in a Hollywood script. Ultra viral videos and photos often showed citizens in business attire, out and about, seemingly going about their day, when suddenly, they were captured on film dropping like flies. It was “like Walking Dead” in the way that the virus supposedly struck its victims, suddenly and without remorse.

One particular photo, which The Guardian described as the image that “captures the Wuhan coronavirus crisis,” took the world by storm.

A man lies dead in the street: the image that captures the Wuhan coronavirus crisis https://t.co/nOO1EhbqOA

“It is an image that captures the chilling reality of the coronavirus outbreak in the Chinese city of Wuhan: a grey-haired man wearing a face mask lies dead on the pavement, a plastic shopping bag in one hand, as police and medical staff in full protective suits and masks prepare to take him away.”

Notably, the AFP photographer who snapped the infamous photo “could not determine how the man, who appeared to be aged in his 60s, had died,” according to the report.

The photo of the well-dressed man, who appeared to be going about his standard business when he suddenly dropped dead in the streets, was just one of the many images and videos coming out of China presenting the narrative of a virus so deadly it would strike down its victims without warning.

Newspapers from around the world ate up the “dead in streets” and “zombieland” narrative.

Photos and videos of people collapsing in the streets continued to emerge via Instagram, Facebook, Twitter, YouTube. What do these sites have in common? Well, they are blocked or remain virtually unused in China.

Shortly thereafter, Chinese authorities announced a sweeping lockdown in an attempt to “stop the virus.” A few months later, Beijing announced that it had successfully stopped the virus dead in its tracks, but only through brutal suppression measures taken to “stop the spread.” The message from the Chinese Communist Party was crystal-clear: countries around the world must lock down immediately, and indefinitely, in an attempt to stop this supposedly deadly plague from infecting your nation’s population. The scare tactic worked. In a state of total panic, the overwhelming majority of the world followed the CCP’s “advice” on handling the virus, which I documented in my piece, “the origin story of COVID-19 lockdowns.”

1/5 This @nytimes article by @paulmozur is a smoking gun on the genesis of the coronavirus lockdowns.

According to the article, the CCP launched a massive social media campaign in ITALY to advertise its coronavirus lockdown measures in early March.https://t.co/BEOkiFFPfm

Now back to the “zombieland” phenomenon.

On top of the fact that the “zombieland” situation was not seen in any other country, the idea that someone infected with COVID-19 could be walking around one moment, seemingly perfectly fine with no symptoms, and then suddenly, without notice, collapse to the ground, is not supported by any of the data on the virus. Looking back to January, none of the “walking dead” stuff that came out of Wuhan seems to make any sense. Even the most vulnerable individuals still present gradually declining symptoms, which worsen over time, before their passing. We have now had over a year to study the process of COVID-19 progression. The images that came out of Wuhan are not at all representative of how the novel coronavirus impacts infected human beings.

The “Wuhan Zombieland” stories don’t make any sense, and they are not supported by any evidence related to the COVID-19 pandemic. To this day, we still don’t know the source for many, if not all of the chaotic images and videos (which, again somehow originated and arrived on U.S. social media platforms even though they are banned in China) that appeared on giant media platforms.

It has been well over a year since the reported outbreak in Wuhan, and that “outbreak” has never represented itself in a similar manner in anywhere else in the world. There is only one reasonable explanation for this – we got hoaxed by the Chinese government, and its disinformation operation continues to this day.

COVID-19 should be understood as a classic Soviet-style disinformation operation. In employing previous disinformation campaigns, the Chinese Communist Party has long reflected the Soviet playbook to perform its own deceptive practices.

This graphic from The New York Times accurately summarizes the key ingredients within the Soviet-style playbook that makes for a successful disinformation campaign:

If you break down the tactics of the COVID-19 disinformation operation, it’s easy to fill in the gaps and show how this style applies to the CCP’s COVID-19 operation.

1) The “cracks” in our society and politics are plentiful, and the West continues to abandon independent thought for total obedience to a corrupt ruling class.

2) The “Big Lie” is the idea that COVID-19 is a very lethal threat and that there must be dramatic measures, in the form of societal self-destruction that is initiated to “stop the spread.” The data in well over 100 countries proves otherwise.

3) The Big Lie is easier to pull off if it involves a kernel of truth. This was a critical component of the operation. Here, the kernel of truth is the virus itself, which causes a respiratory disease similar to seasonal Flu that results in an estimated 0.1 to 0.15% death rate.

— Article continues below Petition —
PETITION: No to mandatory vaccination for the coronavirus
Show Petition Text
1073415 have signed the petition.
Let's get to 1100000!
Thank you for signing this petition!
Add your signature:
Show Petition Text

4) China is concealing their hand by continuing to deceive the world about the origins of the virus, and more importantly, the origins of their deliberate propaganda campaign that resulted in global panic. Sadly, there have been zero government inquiries into what exactly happened in Wuhan.

5) There are countless useful idiots in this story, namely, almost every single Western government head of state, in addition to a class of pseudoscientists known as “public health experts,” who have leveraged this era to accumulate fame, fortune, and power. These useful idiots deployed China’s narratives for a variety of reasons, none of which were supported by any real scientific justification.

6) Given that the West has largely bought into Corona Mania, China does not even need to deny everything about their role in promulgating the insanity. China is surely entertained by the wild goose chases from afar in attempts to find a patient zero at some laboratories in Wuhan, but that’s more of a distraction than anything else. It’s vitally important that Western governments dedicate resources to investigating the origins of the disinformation operation. It is infinitely more important than finding a patient zero.

7) The long game is already playing out. China has emerged economically unscathed by Corona Mania, while the West is entirely depleted due to lockdowns and other self destructive measures. China has been open and thriving, without much of a vaccine rollout whatsoever, for more than a year, while the West is still inundated in lockdown madness. In the end, China launched WWIII in the form of the coronavirus, and won the war without firing a single shot.

COVID-19 should be understood not as a disease, but as nothing more than a Chinese disinformation operation that was presented in the form of a virus.

Reprinted with permission from The Dossier.