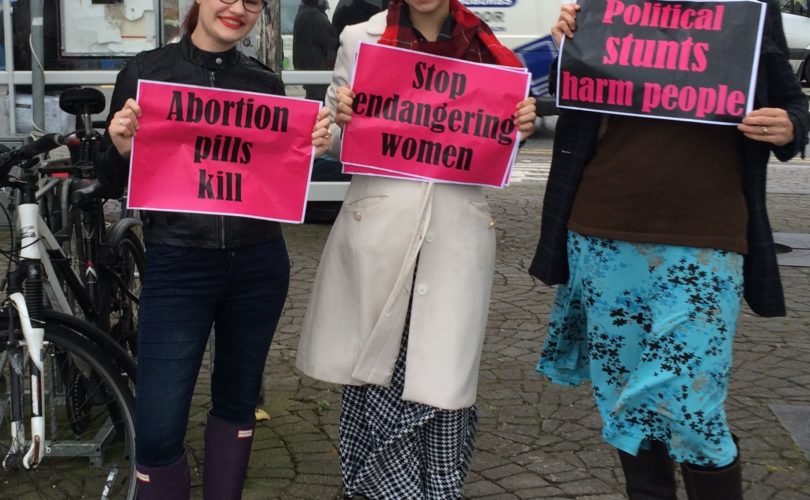 May 7, 2015 (STOPP.org) — The young newlywed put herself at risk for collapse, stroke, heart attack, and death every day when she popped her birth control pill. Tragically, she had no idea there was any danger. Even medical personnel thought her symptoms were no big deal, and on more than one occasion chalked her symptoms up to dehydration. They never told her it could be that her contraception was causing blood clots.

Her name was Kate. She was a 28-year-old business woman whose story is told in “What Every Woman Needs to Know about Blood Clots” posted on the National Blood Clot Alliance “Stop the Clot” website. Kate’s symptoms started while she was in Hawaii on her honeymoon. She suffered pain in her calf that was so intense it woke her up at night. She went to an orthopedic surgeon, who ordered scans, found no problems, and dismissed her. She forgot about it. Seven months later she passed out in an airport following a flight. Medical personnel said she was dehydrated.

Completely unknown to her, Kate had developed deep vein thrombosis in her calf. From there, blood clots began breaking off and going to her lungs. These blood clots in the lungs, called pulmonary emboli, “can be life-threatening and in 10-15 percent of cases, cause sudden death,” according to Dr. Jack Ansell. Dr. Ansell is a hematologist and member of the National Blood Clot Alliance’s Medical & Scientific Advisory Board. The Alliance website goes on to quote Dr. Ansell: “The first sign of a PE can be death.”

Thanks to Kate’s mother, a nurse, who suggested that she might have pulmonary emboli, Kate got help and did not die. She caught it before it killed her. Many other women are not so lucky. They don’t learn the truth until it is too late.

The truth is, “(t)he relative risk for thrombosis in patients who take COCs [combined oral contraceptives] is three- to five-fold higher compared with that of nonusers.” Thrombosis means blood clots that can cause stroke, heart attack, blindness, brain damage, and death. Still, women are not warned about the risk of blood clots with their daily steroidal hormone pill. This is serious and senseless deception and negligence.

According to a Canadian Broadcasting Company report in June 2013, birth control pill manufacturer Bayer paid out in excess of $1 billion to settle thousands of birth control pill lawsuits in the United States. Those settlements were all related to two low-dose contraception pills, Yaz and Yasmin. At the same time, an investigation by the CBC revealed that pharmacists suspected the deaths of 23 Canadian women were attributable to those two same pills.

Miranda Scott, only 18, was working out at the University of British Columbia gym when she fell over backward and died. Her autopsy showed that she died of blood clots throughout her body. She was taking Yasmin at the time of her death. Her mother is now part of a Canadian class action lawsuit against the drug manufacturer, along with hundreds of family members and women who have been harmed or killed by the pill.

Yet, even as Bayer pays out huge settlements, it says it “stands by” its birth control products. Even Elizabeth Kissling, writing for the radical feminist magazine Ms, is troubled by the cover-up and lack of education and testing women are given before being prescribed the pill.

“Today . . . young women are again dying from something purported to help them, something that affects mostly women. Thousands more are experiencing life-threatening, health-destroying side-effects, such as blindness, depression, and pulmonary embolism,” Kissling said, citing accounts of young women who had suffered all these consequences.

She referenced a first-person account posted on xojane.com, that highlighted this shocking quote by a young woman who almost died from pulmonary embolism caused by her birth control pill. “‘Isn’t this bizarre?’ [the young woman] asked doctors in the hospital. They shook their heads and informed me that they regularly encountered otherwise healthy young women with blood clots, almost all caused by birth control.”

The pill kills truth. It exists and is prescribed to women amid a swirl of chaos; amidst contradictions and lies; and amidst dead, blind, and profoundly injured women. Prescribing doctors tell women birth control is perfectly safe if they don’t smoke. Emergency room doctors tell women they “regularly encounter otherwise healthy young women with blood clots, almost all caused by birth control.” Billions of dollars are paid out by drug companies to settle lawsuits, while they say they still stand by their contraceptive pills.

Women need to know. Join American Life League and a host of sponsors around the nation on June 6 to expose the lies and shine the light on the truth about the pill. For more information, visit our website, thepillkills.org. To sign up to sponsor the National Day of Action and/or organize a local event, click here.