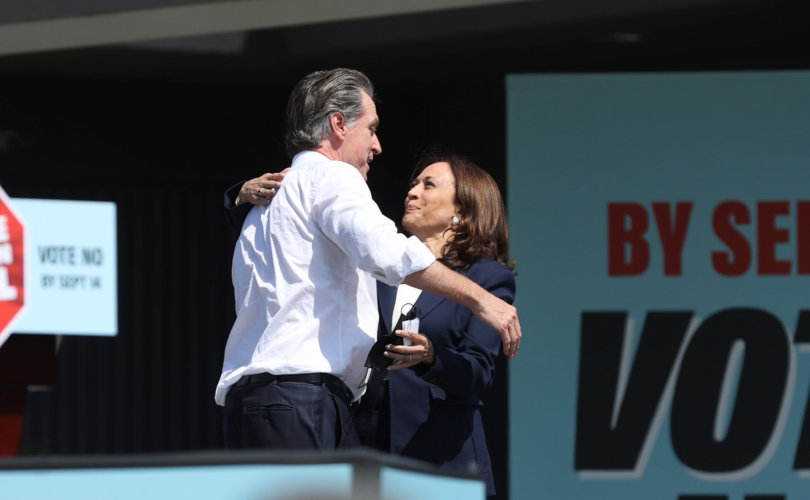 (LifeSiteNews) — California is the only place that I have ever called home and it was the only place I had ever wanted to call home. Growing up, I became used to the liberal views that many residents have espoused.

Many conservatives complain about liberal governors such as Gov. Gavin Newsom and the far-left socialist policies that he implemented as well as the many atrocities against unborn life and the family which he has allowed. I have also been one of those who have complained about him on a regular basis.

Now, things are about to change:

March 15, 2020, was the last Sunday I was able to hang out with my friends after Mass. We did not pay much attention to the coronavirus then. We didn’t think it would affect us. Even my spiritual director, Fr. Stephen, who was suffering from pancreatic cancer and was immunocompromised, laughed it off and said he did not think it was that serious. He told me that the fear behind it was irrational and we should stop trying to figure out when we are going to die.

“Only God knows when, none of us are meant to know,” he said. Not that long after the first lockdown started, I got a call from his brother telling me Father was admitted to the hospital because fluid was filling up his lungs. Obviously, I could not go to the hospital to see him, so his brother was preparing me for the worst-case scenario: On March 24, Fr. Stephen had died from complications of pneumonia which his weakened body could not withstand.

Thanks to the lockdown, I was not allowed to go to the funeral. I was not able to say a proper goodbye to my spiritual father, but I grieved very deeply.

I looked forward to going to the gym, but couldn’t go because the lockdown had been extended and the gym was considered non-essential. My family could not even take a walk in the park like we used to, because everything was shut down. My mother had to re-learn how to cut men’s hair because we could not go to a barber. I could not meet up with my friends at the Italian restaurant around the corner, because everything was takeout.

We ended up stuck in this vicious circle of depression and loneliness for months on end. But we complied with the restrictions because we were “saving lives.”

Eventually, as the virus decided to take a break for the summertime, restaurants and businesses started to open again. Finally, my diocese opened the churches and we were allowed to celebrate Mass again. The only condition was no socialization after Mass. It was a little disappointing, but at least, we were able to receive the sacraments again.

At last, we began to see a hint of pre-pandemic normality. Unfortunately, it was not to last, as Newsom decided to reimpose numerous restrictions. This time, we could continue going to Mass and eating out, but we could not do it indoors. This did not make much sense since data by the Centers for Disease Control and Prevention showed that those who caught COVID had an estimated 94.6–99.997% survival rate. I wondered if others felt the same way.

I recently spoke to two small business owners about how their businesses were affected by the lockdown. Frank, who is a barber shop owner, told me that before the lockdown started, he owned two barber shops with his wife. “We lost a lot of clientele,” he said. “Because of the lockdown, we had to shut down one of the shops.”

As a result, Frank had to pull out funds from his savings that were going to his retirement fund so that he could cover his overhead. He explained, “Since we’re self-employed, we have to do our own retirement savings and we had to dip into that. That has prolonged how long we have to work before we can retire. A lot of our workers no longer had a place to work either, because we closed our other shop.”

Jonny, who is an MMA instructor and a gym owner, was especially frustrated because he had to lay off all his employees during the lockdown. He was forced to apply for a Small Business Association (SBA) loan so he could cover his overhead and his expenses. “I attempted to get one of those and within a week, I was told that funds were exhausted.”

The breaking point for both Frank and Jonny did not come until November 2020, as it did for most California residents. What happened? Newsom went to the French Laundry restaurant in Napa Valley and dined indoors, maskless, and with several other maskless friends.

This led many to infer that Newsom does not believe the pandemic was as serious as he made it out to be since he did not even follow his own guidelines. His actions resulted in severe backlash, which garnered support for the recall movement.

In response, both Frank and Jonny opened their businesses to full capacity. Frank boasted that he even put up a table in his barber shop where people can sign the petition to recall Newsom. “Almost everyone that comes into the shop signed it,” he said. “I would say we probably turned in 1,000 signatures … somewhere around there from our little shop.”

Meanwhile, Jonny rehired all his employees, and more students signed up for gym memberships than ever before. He eventually received a letter from Newsom after it was discovered that his gym was open indoors. “I got a letter from Gavin Newsom saying, ‘It’s been reported that your business is running. If you continue to run your business, you could consequently suffer fines or jailtime. Signed, Gavin Newsom.’ I still have that letter.”

Jonny told me, “At the same time, he’s letting inmates out of jail. He wants to put me in jail for running a legit business but he’s letting others, such as murderers and rapists, out of jail early … That’s disgusting. I don’t care what side you are on. At some point, you just need to vote for what is right and the right thing to do is to get rid of that guy (referring to Newsom).”

Of course, those who do not have small businesses find it easier to just leave California instead of putting up with Newsom and his policy positions. A friend and his wife moved out of California to Arizona back in March of this year. Michael had been a resident of California for nearly 53 years before he decided to move.

I asked him if he had any regrets moving out of California, and he said, “My only regret is that I didn’t have a chance to vote [to recall Newsom] before I left.”

This recall election is about more than just California, it extends to every state in the Union. When President Joe Biden and Vice President Kamala Harris could be working to save Americans in Afghanistan, they campaigned for Newsom to remain in office. If Newsom is recalled on September 14, that will be proof positive that We the People do not consent to the totalitarian behavior and liberal policies that have been forced on us as a nation.