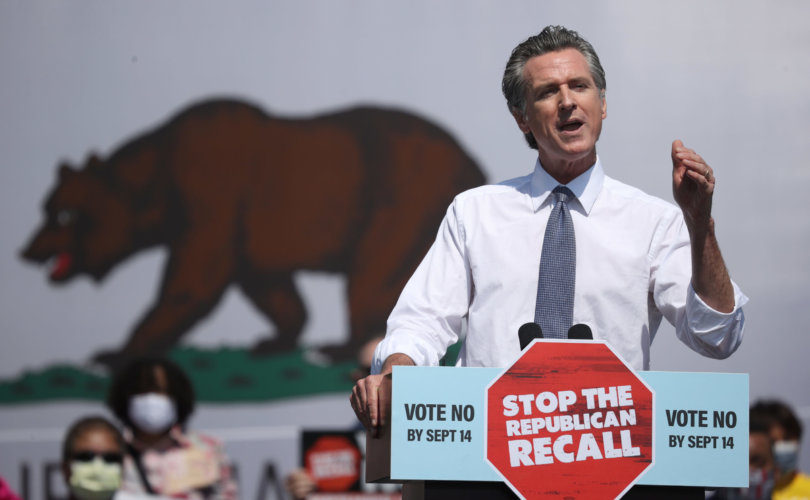 (LifeSiteNews) — Gov. Gavin Newsom is fighting for his political life.

Such a declaration would have seemed utterly ludicrous at the outset of the summer. Even a month ago, the thought that Democrats would be at risk of losing not just one, but both of their “Big Blue” governors (Andrew Cuomo, we hardly knew ye) within three weeks’ time would have seemed like a conservative pipe dream at very best.

Yet today, on the eve of the much anticipated California recall election of 2021, such an outcome seems just as possible now as it would have seemed unthinkable just a few short months ago.

This would not be an unprecedented move for California: In fact, many Americans were first introduced to the idea of a gubernatorial recall back in 2003, when then-Gov. Grey Davis, a Democrat, was removed from office in an off-year election spurred by his handling of the California electricity crisis of 2001, and the widespread voter furor that arose over the corresponding economic turmoil.

Davis was replaced by a candidate who, perhaps more so at the time, seemed as bizarre an alternative as ever: Arnold Schwarzenegger.

As is often said, history repeats, and that may well be the case when Californians head back to the polls tomorrow for its second recall election in less than 20 years. But the fact remains that, due to their general infrequency (this race marks only the fourth recall election held by any state in American history), recalls often generate more questions and even confusion from the public than they do support or opposition, and the 2021 race in California is no exception to the rules.

How we got here

As of 2021, California is one of 19 states that allow a sitting governor to be recalled — removed from office prior to a normally scheduled election.

In California specifically, this process was formally adopted back in 1911, largely due to the efforts of reform-minded, Progressive Era activists-turned-lawmakers seeking to tackle corruption in government by weakening the influence of private money in politics, and, in turn, strengthening the Golden State’s own brand of direct democracy. The resulting law would allow for not just the governor, but all elected officials in California to be subject to voter-prompted recall elections, the goal of which would be to remove an officeholder prior to the expiration of their term.

In order to set the recall process in motion for a statewide official, supporters must collect a sufficient number of signatures from registered California voters that either meet or exceed 12% of all ballots cast in the prior election for the office concerned on a state-approved petition. This year, that number was 1,495,709.

A total of seven petitions were launched since the beginning of Newsom’s term, with the successful one, led by citizen organizer and retired Yolo County Deputy Sheriff Orrin Heatlie, exceeding the required amount of signatures by more than two million.

The petition was certified by the California Department of State in June, and a recall election was scheduled for September 14.

How the recall works

Tuesday morning, after months of heated debate, political posturing, and rapid-fire campaigning, Californians will finally head to the polls to decide Newsom’s fate — if, of course, they haven’t already done so using ballots the state mailed out to all registered voters …

In the voting booth, they’ll be confronted with two separate ballot questions that, in tandem, will determine the outcome of the recall election.

The first question simply reads: ‘Shall GAVIN NEWSOM be recalled (removed) from the office of Governor?’

This, in essence, is what the recall is all about; determining whether or not Gavin Newsom will remain the governor of California for the duration of his regular term, which ends in 2023, or instead be ousted prematurely.

A simple majority — one vote more than 50 percent — of “Yes” votes on this question will accomplish the recall. If “No” prevails, Newsom stays for at least the next year-and-a-half.

In other words, the first ballot question is a straightforward, up-and-down, binary vote.

No matter how voters answer the first question of the recall election, they will be eligible to participate in the second, as well, which presents Californians with a list of candidates to succeed Newsom should he be recalled.

A total of 46 candidates from all parties have qualified for the ballot, and while only a handful have garnered the media coverage that tends to come with such a high-profile race, all it takes to prevail is for one to win a plurality of votes.

So, in other words, should Newsom lose the recall, the candidate with the most votes on the second question will become the new next governor, even with less than 50% of all votes cast (which is widely expected considering the size of the field).

This presents Republicans with a unique opportunity to seize the governorship in deep-blue California. In fact, Newsom’s own campaign has repeatedly encouraged supporters to, of course, vote “No” on question 1, but also to skip question 2 altogether — a risky strategy that values devotion to the sitting governor over ensuring that Democrats hold onto the governor’s mansion with or without Newsom.

This decision led all major Democrats to forgo mounting a campaign of their own, making obscure YouTuber and self-proclaimed moderate Kevin Paffrath the only Democrat candidate to register above zero in pre-election surveys.

And if Democrats indeed choose the path of adherence to Newsom’s narcissistic demands over shoring up an already evaporating plan B to keep their party in power, a Republican could very easily become the next governor.

Why Newsom should be recalled

Under Gavin Newsom, California has consistently led the country by most every measurable negative standard imaginable.

Since taking office in 2019, his actions have been the subject of continued controversy, garnering heavy criticism not only from Republicans but even some Democrats, without whom there would be no recall in the first place.

The petition responsible for bringing the recall to ballot, cites the “detrimental” laws that Newsom has enacted over the past few years, specifically noting California’s notorious status as the highest taxed state in the nation, policies that favor illegal immigrants over citizens, rampant homelessness, and the perpetual transfer of parental rights to government, among others.

Newsom has, indeed, been the driving force behind tax hike after tax hike, cementing California’s distinction of boasting both the highest income and gas taxes of any state in the country, even with a budget surplus.

The standard of living has only worsened under his watch. California’s poverty rate hit 17% (the highest in the nation), and the state’s homeless population increased by 7% to more than 161,000 in Newsom’s first year as governor alone — before COVID and its ensuing economic turmoil.

Newsom has continually prioritized criminal aliens over law-abiding citizens by opting for policies that strengthen California’s existing status as a sanctuary state while neglecting the border crisis altogether. He even signed a bill into law that allows illegal immigrants to serve on state government boards and, in turn, collect a taxpayer-funded paycheck.

These are all valid causes for the governor’s removal, but even casual observers would likely agree that the advancement of the recall effort largely boils down to Newsom’s authoritarian-style mishandling of the state’s COVID-19 response — one detrimental decision after another that has repeatedly disregarded the basic constitutional rights of citizens and private enterprise in favor of massive government expansion and intervention into the daily lives and livelihoods of Californians.

Frustrations came to a head in November 2020 when photos emerged of Newsom, along with a dozen confidantes, skirting his own administration’s COVID protocols by going mask-less for a private dinner party at an exclusive restaurant in Napa Valley.

This “rules for thee but not for me” style of governance defined California’s approach to addressing the COVID outbreak. While Newsom flaunted the privilege of his office by ignoring his own guidelines without consequence, he used executive authority that the courts have already determined he didn’t actually have in the first place to shut down small businesses indefinitely, close California schools and mandate remote learning even for students without reliable internet access, and force mandatory mail-in ballots on voters regardless of personal preference.

Newsom’s pandemic unemployment program lost an estimated $31 billion to fraudulent claims that slipped through the cracks at his Employment Development Department (EDD), even while countless working people who lost their jobs specifically due to Newsom’s shutdowns reported waiting months (if not longer) before seeing a dime from their initial claim — if they got any benefits at all.

His administration even issued guidance meant to control how families celebrate the holidays, with surreal rules dictating everything from the number of households allowed to gather in a home to the duration of such a gathering, the location, and the type of tableware used. (Californians were graciously granted permission to use an indoor restroom at such events, so long as it was “frequently sanitized.”)

So it shouldn’t be a surprise that Newsom has repeatedly voiced support for government-enforced vaccine mandates at the state level, as well, much like those rolled out by Joe Biden late last week — an all-but-certain priority the governor is likely to pursue with a vengeance alongside sympathetic allies in the legislature should he survive the recall.

With all of this in mind, it’s little wonder why thousands of people are not just leaving, but fleeing California on a daily basis.

Newsom rode into office as the golden boy of the Golden State; a career politician with boxes yet to check on his heralded rise to the top. But as his tenure has since proven, he finds himself unable to carry out even the most basic functions of his job without plunging both his constituents and the state itself into unrivaled destitution.

It’s not just incompetence that plagues Gavin Newsom; it’s a record of failures so absolute that they would actually be impressive if they weren’t directly contributing to the depressing, decades-long transformation of what was once one of the most prosperous states in the nation — and currently the fifth largest economy in the world – into a totalitarian hellscape that literally charges people ridiculous amounts of money for the displeasure of living and working there (if, that is, they can find a job at all).

It’s tempting to suggest that most anyone would be an improvement over this mess (radio broadcaster Larry Elder is far and away the superior choice to succeed Newsom), but the foremost priority of voters who plan to cast their ballots in person tomorrow should be to remind Gavin Newsom whom he actually works for by relieving him of his duties.