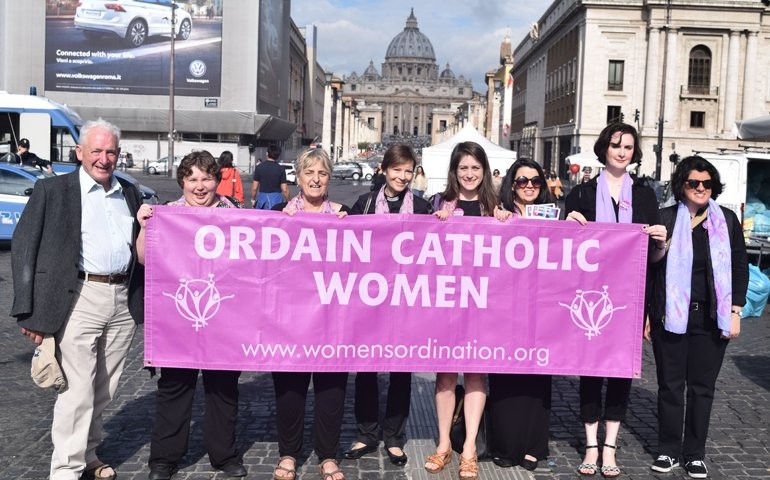 June 8, 2016 (LifeSiteNews) – A handful of women priests held a public demonstration in Rome on Friday, in the gardens of the Castel Sant’Angelo a few hundred meters from the Vatican, asking for Pope Francis to lift their excommunication for having been “ordained” against the will and teaching of the Church. The event has been widely commented on, as for the first time, the demonstration was approved by the Roman civil authorities, who, up to now, had always banned public protests of women priests, seizing their banners and vestments.

On Tuesday, claims the group led by “Women’s Ordination Worldwide” (WOW), two of the women priests were received by an unidentified “senior official” of the Secretary of State: an “unprecedented” meeting during which he listened to their “heartfelt plea for women priests in our Church.” Janice Sevre-Duszynska and another woman priest handed him a petition asking the Pope to open a “dialogue” on this question and to rescind all sanctions against Catholics who campaign for the ordination of women in the Church.

Other factors give hope to the feminist faction in the Church. Washing women’s feet on Good Thursday is a case in point: Pope Francis has done this several times himself now, and he personally mandated a change to the official rules in January, saying the rite should no longer be limited to men and boys but include women and young boys, “in order to express the full meaning of the gesture performed by Jesus at the Last Supper.”

These are all small but clear steps leading the Church to places where she should not go.

There are other signs. In the recent Apostolic Exhortation, Amoris laetitia, two paragraphs address the issue of women’s rights. Pope Francis deplores women’s “lack of equal access to dignified work and roles of decision-making.” He uses feminist language to denounce “the excesses of patriarchal cultures that considered women inferior,” even quoting himself when he says the argument that “many of today’s problems have arisen from women’s emancipation” is “a false, untrue, a form of male chauvinism.” “If certain forms of feminism have arisen which we must consider inadequate, we must nonetheless see in the women’s movement the working of the Spirit for a clearer recognition of the dignity and rights of women,” he continues in paragraph 54.

If priesthood is a way of exerting power or conquering rights, this sort of logic is a real call to action on the part of women who want to play the same role as men in the Church as they do elsewhere. If it is truly a question of answering God’s call to be His instruments, the problem lies in wanting to bend God’s will to their desire, whatever their generosity. If it is a way towards “gender equality” – and this aspect is far from being absent from women priests campaigners’ rhetoric – the ideological aspect of the problem becomes even more apparent.

For several decades now, since the introduction of the New Mass in fact, large numbers of parish priests and other religious have been allowing girls to participate in altar service, in contradiction with the fact that altar boys participate in the liturgy as a first step towards a potential clerical vocation: altar service was originally reserved for clerics, a position to which no woman can accede.

Refusing girls for altar service is now seen by the world as “discrimination” or “sexism.” In France, Bishop Marc Aillet of Bayonne was to learn this when he decided to prohibit girls from serving mass in 2009: a media campaign was set up against him and there were threats of litigation.

But hearts and minds are being profoundly changed where the practice continues, in the same way that female readers of the Scriptures and ministers of the Holy Eucharist are creating the illusion that liturgical roles are interchangeable.

In March, another step was taken, this time in L’Osservatore Romano, published by the official news service of the Vatican: a series of essays by the leader of an ecumenical community in northern Italy, Enzo Bianchi, suggested women should be allowed to preach from the pulpit at Mass. He called it a “decisive path” to respond to “widespread calls – including by Pope Francis – to find ways to give women a greater role in the Church.” Two nuns joined the series saying that Jesus Himself encouraged women to preach His message of salvation. This is not in dispute. But from the beginning, as St. Paul says, women have been barred from teaching and prophesying in church.

Yet another movement is suggesting that women should be allowed to become cardinals. German bishops suggested the move on Women’s Day on March 8. A French auxiliary bishop of Lyons, known for his traditional mindset, Bishop Jean-Pierre Batut, chose the same date three years ago to say he would not be opposed to women cardinals – thereby showing, wrote French Catholic blogger Yves Daoudal, “that even a bishop doesn’t know what a cardinal is nowadays.” Cardinals were originally bishops of the Roman suburbs, or priests or deacons of Roman parishes who counseled the Pope and elected his successor. Which means they were clerics, and therefore men – even if at times in history there were lay cardinals such as the Cardinal Mazarin in France, minister to two French kings, Louis XIII and Louis XIV. A “regressive” practice, Daoudal calls it.

Friday’s demonstration was seen by a number of the 6,000 priests presently gathered in Rome for a Jubilee Mass celebrated on Friday morning by Pope Francis in St. Peter’s Square. From there, the group of fifteen demonstrators who had obtained tickets to attend the Mass as ordinary faithful, were escorted to St. Peter’s Square by security officials and ordered to hand over their stoles for the duration of the ceremony.

While the group did not receive positive endorsement from the authorities of the Catholic Church, something has certainly changed in the way they are being treated and this is already a step – very small but exploited for all it’s worth – for campaigners for woman priesthood. The process is similar to the one used at the two Synods on the Family where definitively “closed” questions such as Communion for the divorced and remarried or the “appreciation” of homosexual unions were put up for debate. Any discussion would be irrelevant because the truth of the matter – women cannot act “in persona Christi” because they cannot be configured to Christ in His masculinity – is clearly established and always has been in Church teaching. But discussion there is, and along with it the idea that things can change along with the “tide of history.”

And so the Women’s Ordination Worldwide campaign celebrated its 20th anniversary in Rome with a number of lectures, events, and public encounters, including a day of conferences at the Casa Internazionale delle Donne in the Trastevere quarter. The “International Women’s Home” is not a Catholic organization but speakers included a theologian at the Pontifical Athenaeum of Saint Anselm, a Benedictine university under papal jurisdiction in Rome, Dr. Marinella Perroni, and an Irish Redemptorist priest, Tony Flannery, who was suspended from his ministry in 2012 for having supported women’s ordination.

In her talk, Dr. Perroni acknowledged that ordaining women in the Catholic Church could lead to a “loss of unity” (or to put it bluntly: schism) but that a “discipleship at two speeds” where men exert ministerial authority over women cannot go on. So the Church’s unity should and must be put in jeopardy, goes the message, even though women’s priesthood is not only doctrinally unthinkable, but obviously a factor of deep division among Catholics. Other Christian denominations have suffered deeply from decisions to “ordain” women, even – providentially – sparking a chain of conversions to the Catholic Church. But if she appears to give in, where to go?

Marinella Perroni went on to accuse St. John Paul II of having “prohibited” all debate on the question in his Apostolic letter, Ordinatio sacerdotalis in 1994: “This has created a sort of paralysis. Progressively, however, the ordination of women became an object of debate in the media and that prohibition – although it frightened because it was never annulled. The recent reaction to Pope Francis’ declaration on the possibility of studying the chance of women deacons has demonstrated that in the last decade the question of female ministry has become familiar to public opinion and enjoys a broad consensus fidelium,” she said.

This is an interesting point. Surely, Pope Francis did not endorse deaconhood for women in agreeing that a commission should look into the question, at a session with the International Union of Superiors General in Rome several weeks ago. “Clarification” soon followed from the Vatican spokesman, Fr. Federico Lombardi: “The pope did not say he intends to introduce a diaconal ordination for women.” This could be corroborated by the fact that he had been challenged to give his opinion on women deacons in the primitive Church – and they definitely had no sacramental role or consecration.

But the damage has been done. The commission might be intent on history but those who are asking for change are plainly intent on obtaining evolutionary – not to say revolutionary – developments and the Pope’s words, confusing though they may seem, have been taken as a clear go-ahead for discussion.

As pressure builds up the question arises. Is the question of women priests being pushed forward in the same way that homosexual unions were introduced into the Synods on the family as “side issues” – Cardinal George Pell spoke of a “stalking horse” – and coming very much to the fore? The next Synod will be on priestly celibacy. The “side issue” being prepared for that one might very well be the ordination of women.

In Rome, the Women’s Ordination Worldwide campaign includes a poster exhibition all over Rome by photographer Nausicaa Giulia Bianchi. In LetteraDonna, she tells of her discovery of the 200 or so women priests who claim to have been ordained within the apostolic succession, by a bishop who has remained nameless. Interestingly, she describes the “beautiful experience” of going to a woman priest’s “mass”: “They do not recite the Mea Culpa, but instead quote from the saints. And during the Eucharist they do not say ‘The Body of Christ’ but ‘You are the body of Christ’.”

This means that whatever these women do, they are not saying mass at all. But then, they can’t anyway.

One of the greatest saints of all times, Little Therese de Lisieux once wrote, near the end of her earthly life, that she felt the deep desire to be a priest, and she then spoke repeatedly of this desire – but also accepted the “sacrifice” of not being able to attain this ideal: “Even when I desire to be a priest, I admire and envy the humility of St. Francis of Assisi and feel the call to imitate him in refusing the sublime dignity of priesthood.” She would then meditate on the “apostolate of prayer” to which Carmelites are called: “I think our part is very beautiful, what have we to envy in priests?”

“In the heart of the Church, I shall be love”: in resuming her calling, this immense Doctor of the Church showed that a woman’s vocation can be no less sublime than a priest’s.