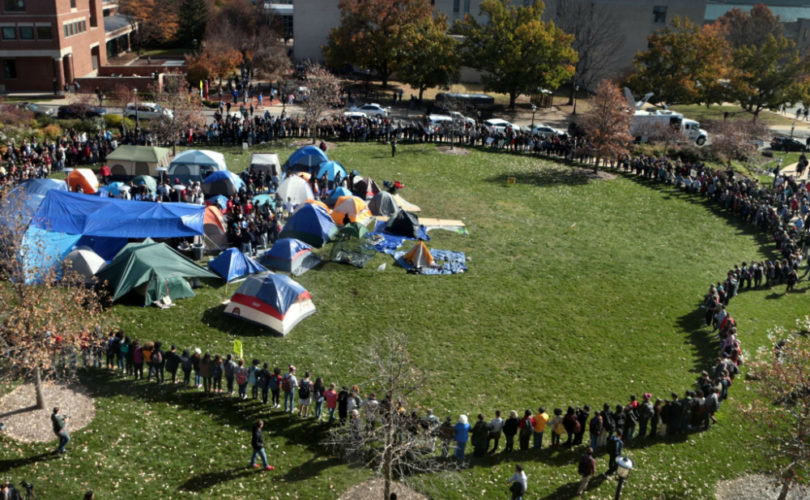 University of Missouri students form a wall around a campus protest to prevent media access.

Like most people at universities, Click appears to desire tolerance and open-mindedness only when her views dominate. For the anti-life, anti-family crowd, “tolerance” has a very narrow meaning: women’s abortion “rights,” “marriage equality,” and other issues of affirmative action, at which point it becomes a buzzword tossed about as a #hashtag for those not discerning enough to question its implications.

Supposedly, tolerance stands for judgment-free equality and acceptance—an attractive banner to which liberals and starry-eyed millennials eagerly gaze. This is perhaps most epitomized by the shift in support for the redefinition of marriage among young Catholics, many of whom see the Church's teachings on marriage as intolerant.

For young people as a whole, Pew Research Center polls show that in 2015, 70 percent of Millennials support same-sex “marriage.”

And a Pew poll found that 85 percent of Catholic Millennials accept homosexuality.

The results of the polls reveal that there is division in the Church — division not based upon doctrinal change, per se, but instead based upon attitude and age.

So what can orthodox Catholics do to change this? Bishop Daniel Thomas of the Catholic Diocese of Toledo told me that one key is to reject the “tolerance” message entirely.

“The Church does not ‘tolerate’ persons, she loves them,” he explained in an e-mail. “And she calls them to a deeper life with God. If that is seen as intolerant, then the Church needs to ask those who judge her and call her intolerant, why they can’t afford the Church the very 'tolerance' they demand of the Church?”

Bishop Thomas' reaffirmation of the message of “encountering” and “loving” others through Christ’s example challenges the illogical and often alienating manifestations of tolerance endured on the college campus. Young Catholics in Toledo seek out this message, and they find it when the Bishop encounters them, and takes the time to answer audience questions during speaking events.

And according to Bishop Thomas, the Catholic response to “tolerance” is love.

Meeting people where they are, seeing Jesus in them, and inviting them to life in Christ…this focus would radically challenge many whose understanding of tolerance means accepting everyone and their manner of life, no matter what, without valuing the person’s immortal soul, without seeing them as true children created in the image and likeness of God, without calling them to the freedom and holiness for which God created them.

In other words: Young Catholics should recognize that the leftist message of “tolerance” cheapens the substance they are actually seeking out, and it contradicts the substance of the faith. Likewise, the Catholic message is one of community and of discussion. “Seeing Jesus” in a fellow student would mean creating a dialogue and a relationship with another student that encourages discussion about subjects of dissent.

For the Catholic Church to survive today’s crusade of tolerance, Bishop Thomas emphasizes that the Catholic Church has a responsibility to react to those trying to silence discussion: “…as the Body of Christ, must not tolerate anything which would be an affront to human dignity, which would deny her a voice to speak out in the public square, or which would remove freedom of religion guaranteed by the Constitution.”

All across the country, unflinching liberal media does much to ensure that tolerant attitudes are indoctrinated across faith boundaries, and especially within the boundaries of the college campus. Whether the state-sanctioned discrimination of Christians in Oregon, Washington, and Colorado, the attempt to block a Chik-fil-A at Johns Hopkins University, or students at Wesleyan and Yale who were harassed for not falling into line, it is clear that the word “tolerance” is just that — a word backed by no discernible effort to uphold truth, justice, or the human person.

The Church can never compromise the truth, even when it is unpopular. Perhaps the place between Catholic teaching and liberal “tolerance” is a place where Catholics can mediate and show their peers that the Catholic faith moves beyond simply “enduring” the beliefs of others — and instead brings people closer to eternal happiness by respecting the human person in its totality.

Veronica Lark is a public relations intern at LifeSiteNews, and a former intern with the pro-life Susan B. Anthony List. She is currently an undergraduate student at Lourdes University in Ohio, majoring in English with a minor in Political Science.