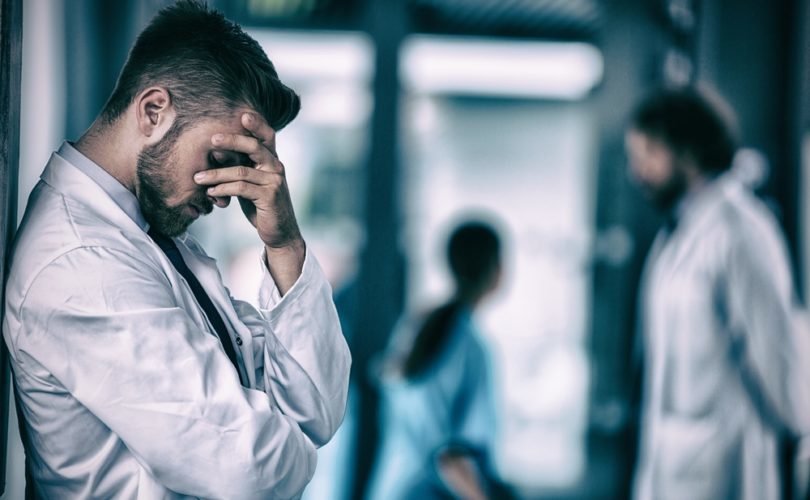 May 24, 2021 (AIER) — On April 30th, 2021 the College of Physicians and Surgeons of Ontario put out a highly controversial statement regarding what it considers to be COVID misinformation. The CPSO is a regional regulatory body empowered by statutory law to exercise licensing and disciplinary authority over the practice of medicine in Ontario. Think of it as the equivalent of a State Bar Association for American lawyers except for Canadian doctors. The statement from the CPSO goes as follows:

The College is aware and concerned about the increase of misinformation circulating on social media and other platforms regarding physicians who are publicly contradicting public health orders and recommendations. Physicians hold a unique position of trust with the public and have a professional responsibility to not communicate anti-vaccine, anti-masking, anti-distancing and anti-lockdown statements and/or promoting unsupported, unproven treatments for COVID-19. Physicians must not make comments or provide advice that encourages the public to act contrary to public health orders and recommendations. Physicians who put the public at risk may face an investigation by the CPSO and disciplinary action, when warranted. When offering opinions, physicians must be guided by the law, regulatory standards, and the code of ethics and professional conduct. The information shared must not be misleading or deceptive and must be supported by available evidence and science. [Emphasis added]

The CPSO justifies its statement with the following rationale:

There have been isolated incidents of physicians using social media to spread blatant misinformation and undermine public health measures meant to protect all of us.

This development is nothing short of horrifying. Although there are certainly concerns about the spread of falsehoods and conspiracy theories in the age of COVID-19, this sort of broad censorship of speech from practicing medical professionals is not only an ethical sham but anti-science. The practice of science is premised on the rigorous application of the scientific method which among other things requires falsifiability and debate. The move to silence doctors also flies in the face of liberal democracy – something that has been deteriorating around the world as both the public and private sector move to silence dissent.

The fact that the CPSO, a licensing body wielding the power of the state, has taken such an aggressive move to silence dissent even on lockdown policies is especially disturbing given that they are preventing doctors from voicing their expertise on such important matters. The Toronto Sun comments on the incident by writing:

Right now, restrictions are severe in Canada. The public health orders concerning, for example, the closure of basketball courts and golf courses in Ontario have been widely condemned by many physicians.

Why should physicians not speak out against restrictions that they feel are harmful to the health of their patients?

Despite undeniable suffering due to lockdowns, the CPSO wants Ontario doctors to stay quiet,” wrote Dr. Shawn Whatley, a former president of the Ontario Medical Association, in a guest column in the Sun.

It doesn’t stop in Ontario

One may think that the policy adopted by the CPSO may be an extreme aberration unique to Ontario. According to the Toronto Star this practice is seeing more adoption, not less. It writes:

Doctors in British Columbia are being warned they could face investigation or penalties from their regulatory body if they contradict public health orders or guidance about COVID-19.

The warning is contained in a joint statement from the College of Physicians and Surgeons of B.C. and the First Nations Health Authority.

One doesn’t even need to have a strong opinion on this matter to understand that censoring doctors and mandating conformity to state policy is not only immoral but a direct attack on scientific freedom.

The Declaration of Canadian Physicians for Science and Truth

In response to the CPSO’s order, there has rightly been pushback from the Canadian medical community in the form of the Declaration of Canadian Physicians for Science and Truth. The Declaration’s website features a petition that has been signed by over 4,700 physicians and concerned citizens at the time of this writing.

The declaration lays out three basic complaints with the CPSO’s order.

More elaboration and information can be found on the Declaration’s website.

It doesn’t take a background in medicine to know that the censorship of medical professionals during a pandemic is the last thing that should be happening. There is no better time for rigorous debate on the efficacy of public health measures than now with unprecedented and unproven lockdown policies being forced on populations worldwide.

Some may say that we can trust that freedom of speech will be restored and that censorship is necessary to expedite the end of the pandemic. This is abundantly flawed for two reasons. The first being the idea that Canadian doctors must conform to the vision of the state and not question it. This is not only a violation of their duty as medical practitioners and scientists but deeply crippling to a sound public health response. Finally, this move is fundamentally opposed to the values of liberal democracy which have now been jeopardized on a global scale. With the lights of an enlightened and modern civilization going out across the world, it would be fair to ask, will they ever be turned back on in our lifetime?

Published with permission from The American Institute for Economic Research.

1
WATCH: Pro-abortion protester’s voice becomes ‘demonic’ as he claims to ‘love killing babies’
2
Catholic priest openly challenges Pope Francis: Are you a Freemason?
3
Pope appoints jailed bishop’s canon lawyer to investigate priests who testified to abuse
4
Princess Gloria: Global elites think they do good but actually serve the ‘prince of the world’
5
While the Supreme Court should be praised for overturning Roe, it didn’t go far enough
Subscribe to Daily Headlines »