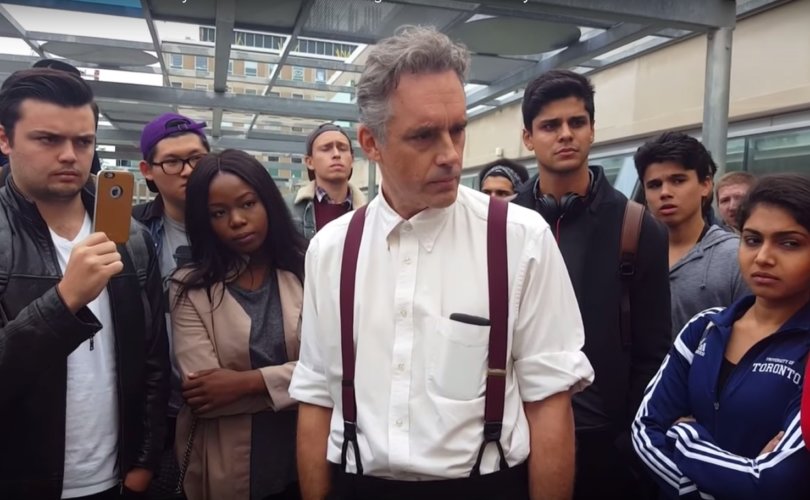 Jordan Peterson faces off against protesters in 2016, shortly after he publicly declared his opposition to Canadian legislation that would force people to use various recently-fabricated pronouns, such as xe and xir.Youtube Screenshot

April 8, 2019 (Human Life International) — A so-called “human rights tribunal” in Canada has just ruled that a Christian activist must pay $55,000 to a provincial politician because he referred to this politician as a “biological male” in a political pamphlet. The politician in question, Morgane Oger (born Ronan Oger), is a biological male. However, he has since “transitioned,” and is living his life as a “transgender woman.” According to the decision, Bill Whatcott must compensate Oger for injuring the latter's “dignity, feelings and self-respect.”

The terrifying precedent set by this case can be illustrated by one, flabbergasting fact: The judge in the case refused to allow Whatcott's lawyer to offer testimony showing that, in point of fact, Oger is a biological male. According to the judge, “the 'truth' of [Whatcott's] statements in the flyer is not a defense.” As such, said the judge, “evidence is simply not relevant to the legal issue…”

Read that again. Let it sink in. Truth is not a defense. Evidence doesn't matter. What matters — it would seem — is whether someone's feelings were hurt. And thus, with a stroke of the pen, the rule of law is replaced with the rule of feelings. But as Whatcott has just learned, and I suspect many more are about to learn, feelings can be far more ruthless and unyielding taskmasters than laws.

Back in 2016, University of Toronto psychology professor Jordan Peterson was roundly mocked by so-called progressives for warning that gender ideology is “totalitarian.” Peterson, who has made a career of studying totalitarian regimes, above all the Soviet Union, was accused of seeing bogey-men under every rock, and of projecting his paranoia onto a movement that was only seeking basic human rights for a marginalized group.

And yet, with every passing day more and more stories are emerging showing that, if anything, Peterson's dire warnings weren't dire enough. In many cases, gender ideologues (who, I should note, are not the same as transgender individuals, many of whom are suffering profoundly and deserve our compassion, even if we do not necessarily agree with the methods they choose to deal with their pain) are no longer bothering to even try to maintain the façade of humanistic reasonableness, showing themselves willing to bulldoze the basic rights of anyone who gets in their way. Disturbingly, this even includes even people belonging to categories that until recently were understood to be themselves in need of special protections.

You'd think, for instance, that the right of a woman who has been raped to feel completely safe while seeking treatment is about as sacrosanct as a right can possibly be. Recently, however, the Vancouver Rape Relief and Women's Shelter lost over $30,000 in city funding. The city's decision to pull the funding came after a fierce campaign against the shelter spearheaded by Morgane Oger — yes, that's the same politician named above — and other totalitarian transgender ideology activists, who are furious that the center refuses to offer its services to “transgender women,” i.e. biological men who now claim to be women.

The center, reasonably enough, believes that the last thing biological women who have been raped need is to be forced into close quarters with strange men. Oger disagrees. By restricting a women-only rape shelter to biological women, says Oger, the center is engaging in “systematic, consistent misbehaviour.” The women's shelter shot back, pithily, that Oger and other city officials are effectively perpetrating “discrimination against women in the name of inclusion.”

To understand how grotesque this decision is, it's necessary to remember that according to gender ideology, all that is needed for a born man to become a woman is for him to claim that he is a woman. In other words, included among “transgender women” can be men who look like men in every way, including possessing male genitalia. Now, imagine being a woman who has been raped, who goes into the bathroom or joins a group therapy session at the rape shelter, expecting to find the security of a women-only environment. Instead she finds that she has to use the facilities or expose the raw wounds of her trauma — trauma inflicted by a man — in the presence of a man. Thanks to gender ideology, such a woman has no right to complain. If she's truly “woke,” she will swallow her own trauma, subjugating her right to heal in a safe environment to the latest dogmas of progressive equity.

Another story: Recently, it was discovered that a man who was reading to children at Freed-Montrose Public Library in Houston was a convicted pedophile. Thirty-two-year-old Albert Garza was convicted of assaulting an eight-year-old boy in 2008. But when he applied to read stories to children while dressed as a woman as part of “Drag Queen Storytime” — a truly bizarre indoctrination program which libraries across the nation are falling over themselves to host these days — the library didn't think it necessary to perform even a basic background check.

Now, you'd think that if there's any place in the world where children should expect to feel absolutely safe, it would be during children's story-time at a public library. At a bare minimum, you'd think that adults who are arranging for a man who spends his waking hours sexually titillating people for a living to have access to children would ensure that such a man is not a convicted pedophile. But then again, in our topsy-turvy world, gender ideologues are falling over themselves to encourage young children to become drag queens, and even (and it's enough to make one shudder) applaud when those children perform sexually provocative drag shows in a gay bar. (Yes, this actually happened.)

Stories like this, and worse, keep coming, faster than I can possibly write about them.

This month, for instance, we heard about the Catholic mom of five in the UK who is being investigated by police for “misgendering” the son of a transgender activist (a transgender activist, it should be noted, who arranged for her 15-year-old son to be castrated in Thailand, because the procedure was illegal for a child of that age in the UK). Also this month, we heard about the parents in the UK who objected when their autistic teenage son was prescribed hormone therapy. After their son told his school that his parents wouldn't allow him to undergo the so-called treatment, the school reported the parents to child services for being “emotionally abusive.” The parents were then warned that if they didn't support their child, he could be taken away from them and put into foster care. According to The Daily Mail, last year at least three children were taken away from their parents and put into foster care, because their parents objected to their gender transition.

Clearly, Peterson was right. There is an increasingly naked totalitarian aspect to gender ideology. Anyone who will force raped women to share living quarters with biological men, who will seize children from their parents because the parents express concern about treatments that will render their child permanently sterile, who will pump children full of artificial hormones and mutilate their genitals after the barest pretense of a clinical investigation, who will shrug at throwing a mom of five children into jail for the crime of stating biological facts, and who declare that truth is not a defense and evidence is unwelcome in a trial, all in the name of a recently concocted, scientifically unproven (in many cases disproven) set of dogmas, shares certain obvious commonalities with the perpetrators of some of the worst human rights violations of the 20th century. I see every reason to expect that the more power such people accrue, the more brazen and unjust their exercise of that power will become.

Peterson's warnings were recently repeated and expanded upon by Nancy Pearcey, an academic who has been focusing on the issue of transgenderism. “Anyone who's read Solzhenitsyn and his Gulag Archipelago or any book like that knows that totalitarian systems often begin by compelling speech, by telling people what they may and may not say,” Pearcey noted in a recent interview. “And if you can tell or coerce people's speech, you can eventually control their thoughts.”

“If you've robbed [people] of the language to express their true belief, and you've required them to give voice to convictions that they do not hold, that eventually messes with your mind,” she continued. “It eventually often changes people's minds.” In other words, totalitarian transgender ideologues are engaging in what is known as “gaslighting,” a kind of psychological manipulation in which the manipulator seeks to cause the victim to question his or her sanity. By demanding that we change the way we speak — and, indeed, think — about one of the core, and most self-evident categories of reality — biological sex — gender ideologues are undermining the very foundations of reason.

In the interview, Pearcey contrasted totalitarianism with authoritarianism. Whereas authoritarian states want power, “they don't care much what you do in your private life.” A totalitarian state, on the other hand, “is one that wants to control your thoughts. They want to control your inner life.” This totalitarianism is already present in countries like Canada, she warned, and is “right on our doorstep here in the States.” Given the stories related above — and some of the stories I recounted a few weeks ago — I don't see how we can possibly argue that Pearcey isn't right.

To be forewarned is to be forearmed. Many people who come face-to-face with transgender extremism are tempted to kowtow, because they know that transgender ideologues will not hesitate to make their lives miserable. However, every act of capitulation emboldens the gender ideologues. Caroline Farrow — the mother of five mentioned above — has said that she is willing to go to prison to protect her free speech rights. So has Jordan Peterson. Are we similarly prepared to stand up for the truth?