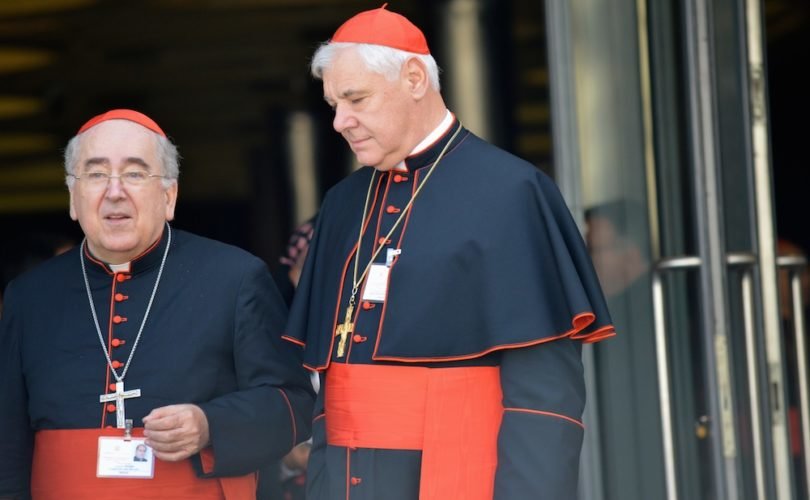 ROME, April 10, 2015 (LifeSiteNews.com) — In the last month, Gerhard Ludwig Cardinal Müller, prefect of the Congregation for the Doctrine of the Faith, has given several interviews in which he made many important statements about the current situation in the Church, the pressures from the modern world to change Catholic doctrine, and the persecution of Christians in the Middle East.

On March 24, the German regional newspaper Rheinische Post published an interview with Gerhard Ludwig Cardinal Müller, Prefect of the Congregation for the Doctrine of the Faith. In it, Cardinal Müller made some important statements about several issues to be found in the so-called “Liberal Agenda,” including celibacy, the loosening of the moral teaching of the Church and the admittance of remarried Catholics to the Sacraments, especially the Holy Eucharist.

When asked whether Pope Francis will introduce such proposed liberalizing changes into the Church within the next years, Cardinal Müller replied: “Francis wants that people in difficult situations are not left alone, but, rather, are accompanied and integrated into their parishes, without any distancing from the teaching of the Church. A simple 'Yes' to the above-mentioned themes of the [liberal] agenda cannot be the answer of the Church to the challenges of secularization.”

Cardinal Müller thereby clearly distances himself from these attempts to liberalize the Church's attitude and teaching on these moral matters. On the contrary, he challenges each Catholic to follow Christ's Teaching and to meet the challenge and to trust that He will help him.

He said: “The challenge is that each man finds in Jesus the center and the foundation of his life. Each man has to know that in life and in the life thereafter he must put his trust in the Incarnate Son of God.  That is our agenda, and not a cheap Christendom, a Christendom for a lower price. We are not permitted to offer to the people the Faith in a diluted way.”

When the journalist noted that these are strict and challenging words, Cardinal Müller replied: “If someone has doubts about Eternal Life, to that person the Church cannot simply say: 'It does not matter after all, the main thing is that you sometimes do something good.' Or, when people are Catholic, but do not attend Holy Mass, we cannot say: 'One can be a good Christian without [going to] Mass.' No, both belong to one another. Who in his heart believes and confesses with his mouth, he will be saved, says the Apostle St. Paul. We cannot simply give into the 'secular Zeitgeist.'”

Cardinal Müller clearly rejects herewith any notion of moral relativism, but reminds the secular world, as well as Catholics, that one has to follow Christ and act accordingly in order to be saved. An encouraging and strong statement that is direly needed in a time of confusion and disorder within the Church and in the world.

When questioned about the celibacy of priests, the cardinal pointed to the Church’s long tradition and to the example of Jesus Christ. “[Celibacy] is based on a long tradition. There exists a special closeness between the priesthood and this form of life. Jesus also lived in celibacy. I do not see any essential reasons why the Church should distance herself from this tradition,” he said.

Cardinal Müller also stresses in this interview the importance of maintaining the unity in the Church in the face of a growing conflict between the two streams of thought within the Church concerning the question of a liberalization or relaxation of the Church's morals, and he refers to the vow of each bishop “to be loyal to the Catholic Magisterium under the leadership of the Pope as the successor of Peter.”

Cardinal Müller also pointed out that he is very concerned about the cruel and inhuman treatment and killings of Christians in the Near East and the lack of indignation and active concern in the West about these deliberate atrocities. He said that the warnings about a possible attack against the Vatican should be taken seriously. “One has to take [this threat] seriously. I am even more worried about the expulsion of the Christians from the Near East and the killing of Christians all over the world. Who ever violates the commandment of God ‘Thou shalt not kill,’ is acting in a perverse and inhuman manner. … I do not know where this lack of sensitivity concerning the violence against Christians comes from.”

Upon further reflection, Cardinal Müller might well have drawn a link between the same secular, liberal forces within society that put pressure on the Catholic Church to change her own moral teaching and, at the same time, ignore the cruelties committed against Christians in other places of the world, out of their general disdain or scorn for Christianity.

In another interview at the end of March with the Italian News Agency ANSA, Cardinal Müller made some strong comments about the importance of keeping Mercy and Truth united. “The Holy Year [of Mercy] shall serve to remind the people that mercy cannot exist without the truth,” he said. Also to those people whose lives have been troubled in broken marriages the truth has to be brought, rather than new pastoral approaches. He reminds us that God loves us “in intervening into our history with his grace.” With this grace, we are then called to reform ourselves “so that we receive a larger heart and truly change our lives. That is why we have to remind ourselves, during this Holy Year, that we cannot speak of mercy without including truth.”

Cardinal Müller insisted upon the truth of God as distinct from the way we human beings sometimes look upon our lives in our own families. “It is important to accept everybody, certainly, also the sinners, because we are all sinners, but we have follow the commandments of God, and not mere human reasoning. Human beings sometimes look at things in a way which is a little bit different from the way of God.”

He added: “The mercy of God takes us as we are, but it leaves us not in that same state in which it has found us.”

Through his grace God wants to lead us to salvation, and thus he leads us to reform our lives, he said. “We cannot pronounce the Resurrection without the Cross. There is not second or third way.” These comments clearly stand within the context of the Synod of Bishops and of the proposal made by some to allow remarried couples to receive Holy Communion.

On April 2, Cardinal Müller gave another interview to the German Catholic newspaper Tagespost, in which he refutes some of the very troubling statements coming from the German prelates Cardinal Reinhard Marx and Bishop Franz-Josef Bode. These two prelates had claimed that the Church needs to take the “life realities” of the people much more into account and accordingly adapt her own moral teaching and pastoral practice. Bode even spoke of the “life realities” as a source of Revelation.  Müller replies thus to these statements: “Holy Scripture and Tradition constitute under the guidance of the Magisterium the Word of God within the conscience of the Faith of the Church. […] This truth is finally Jesus Christ Himself. Wherever one puts mere human considerations or even the power of facts on the same level as Holy Scripture and Tradition, one departs from the foundations of Catholic theology.” All faithful have to adapt their thinking and their conduct according to Revelation, so that they, “in fulfilling their earthly duties under normal life conditions, do not separate themselves from Christ.”

Cardinal Müller distanced himself from any idea of a secular humanism that should decisively influence the Catholic Faith: “At the same time, she [the Church] cannot accept a humanism without God nor an attempt at an ideological self-redemption. Christ is the Redeemer of all men.” Müller therefore reminds us of the duty and role of the Church at any given time of history: “The life realities in each epoch offer a mixture of opportunities and risks. The Church proclaims always and everywhere the Gospel of the particular vocation of each man: to find in God here on earth, and beyond death, meaning, happiness, salvation and eternal fulfillment. The path to it is the imitation of the Crucified and Resurrected Lord.”

Cardinal Müller also refutes in the same interview the claim of Cardinal Marx that the German bishops will make their own pastoral decisions independently from Rome. Müller replied that some local churches admittedly have to take in account the concrete situation of their country. Yet, Revelation is entrusted to the whole Church: “The teaching and the commandments of God cannot vary according to national differences. They keep the local churches together in the Catholic unity. It is clear that the pastoral and sacramental practice of a country cannot contradict the truth of the Faith.”

It is encouraging to see how Cardinal Müller takes his stance as the Prefect of the Congregation for the Doctrine of the Faith in defending Our Lord's Teaching and Commandments, and not by way of wavering words. May many other Cardinals and Bishops be likewise encouraged by his witness, and thus follow him in this fight against the inordinate and deforming pressures of our time.