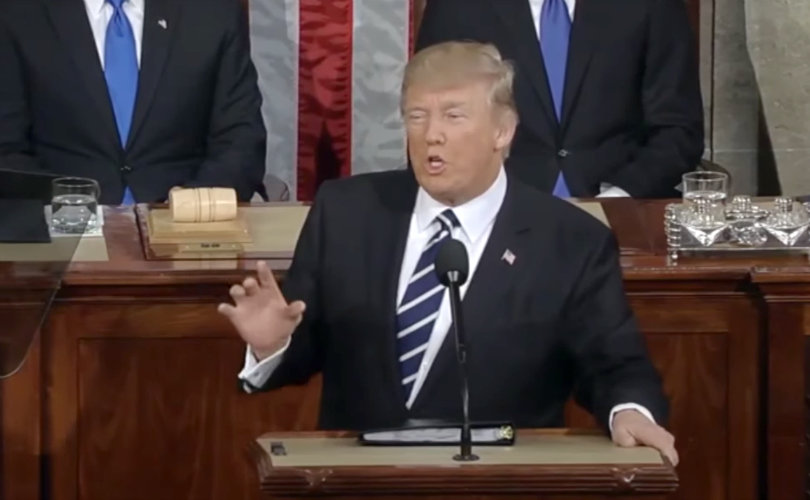 March 10, 2017 (BreakPoint) — The words “hate,” “bigotry” and “intolerance” are mis- and over-used. But that makes it more important that we speak out against the real thing when it’s there.

President Trump began his first address to Congress by citing “recent threats targeting Jewish Community Centers and vandalism of Jewish cemeteries,” and a “shooting in Kansas City.” This was his prologue to saying that the United States “stands united in condemning hate and evil in all of its forms.”

I’m so glad that he spoke out.

But let me also hasten to add that we shouldn’t leave it to the President to remind us of the need to condemn hate and evil – that’s the job of the Church.

The past few months have witnessed, to borrow from Yeats’ poem, “The Second Coming,” a “rough beast” slouching to be born. That “rough beast” is open, and sometimes violent, expressions of bigotry and intolerance.

Now Christians have ample reasons to be wary of those words “bigotry” and “intolerance,” since we’re often unjustly accused of both. But to use the medieval Latin phrase, “abusus non tollit usum,” the misuse of something does not negate its proper use. There are such things as bigotry and intolerance.

Some of it, such as Texas high school students taunting their Hispanic opponents at a basketball game with chants of “build that wall!” are easy to rationalize as youthful hi-jinks, until you put yourself, as Jesus commands us to, in the shoes of the kids being taunted.

Other examples, such as the killing of an Indian-born engineer, and the wounding of two other people by a man who had earlier yelled “get out of my country!” are impossible to ignore. The fact that the man may been under the influence of alcohol when he pulled the trigger does not make the crime less troubling.

While alcohol lowers inhibitions, it doesn’t create the impulses being inhibited in the first place. To quote another Latin phrase, “in vino veritas,” or wine brings out the truth.

Likewise, the vandalizing of Jewish cemeteries in St. Louis, Philadelphia, and Rochester, New York, along with bomb threats against 120 Jewish Community Centers across the country is nothing less than alarming.

And it’s not just Jewish Community Centers. In the past two months, four mosques have been deliberately set on fire.

The good news is that, amidst all this hate, we have seen examples of grace: Two American Muslims raised over $140,000 to repair the damage done to Jewish cemeteries, and Muslim veterans have vowed to protect Jewish cemeteries. As one veteran tweeted, “If your synagogue or Jewish cemetery needs someone to stand guard, count me in. Islam requires it.”

Strictly speaking, while I am thankful for his words, I am not sure that it does. But there is no questions about Christianity. As Paul says in Acts 17, God determines when and where we live. And as Esther so courageously demonstrated in difficult times, silence is not an option.

In a world where the common good is increasingly thought of as a “zero-sum game,” in which your gain is my loss, we’re called to proclaim, in both our words and deeds, that God in Christ has broken down the wall of hostility that separates one group from another. (Ephesians 2)

And we are called to love our neighbors as ourselves. At a bare minimum this means that we are as concerned about their freedom, safety, and dignity as we are about our own.

Every vandalizing of a cemetery, attack on a mosque, or act of bigotry should trouble us. If it doesn’t, then Jesus’ words “If you love those who love you, what credit is that to you? Even sinners love those who love them,” should drive us to repentance.

And if we remain silent, our claims to religious freedom will begin to sound so much like special pleading—not only to our neighbors but to God, as well.

This way of being the Church does not and should never require a presidential go-ahead.