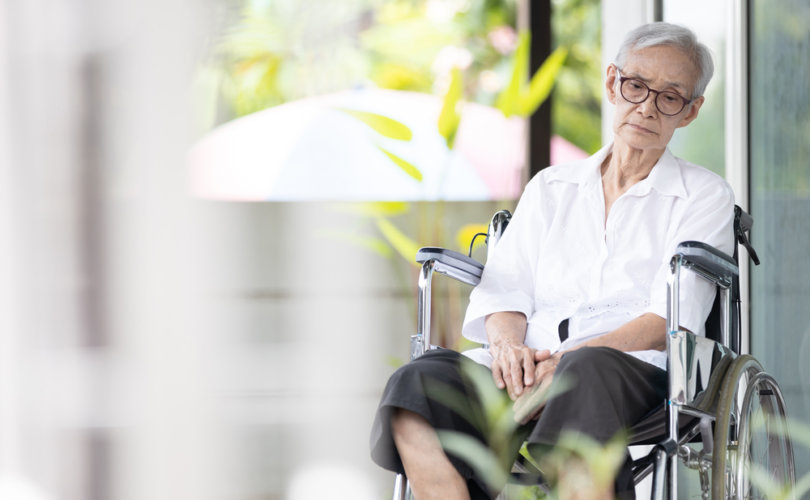 The combination of sporting excellence and overcoming physical obstacles makes for quite an affair that captures the hearts of many. This is, of course, a good thing, and it is heartening to know that people all over the world can appreciate the “feel good” stories of Paralympic athletes.

Nonetheless, one cannot help but think that there is a certain hypocrisy surrounding the popular admiration for the Paralympics. This is not to say that there should be less admiration for the athletes, but it is a bit ironic that our culture exalts the efforts of a population at a physical disadvantage while at the same time grave evils such as euthanasia are promoted the world over based on the justification that having severe physical obstacles renders quality of life less evident. We could even add that abortion for reasons of detected handicaps is also commonplace.

If we consider for a moment the popular justification for euthanasia, we will likely call to mind platitudes such as: “no one should have to live a life of suffering,” or “if someone’s quality of life is worsened, then they should have the right to ‘go on their own terms.’”

I distinctly remember sitting at a barbecue a couple of years ago and speaking with a distant family member about a friend of his who had “gone his own way.” He was referring to a man in his 50s who decided to access physician-assisted suicide, which is legal in Canada. Granted, the man was dying from a severe cancer, but was not a disabled man. In addition, various “dying with dignity” organizations and legal frameworks make it clear that disability on its own is not justification for medical assistance in dying.

Nonetheless, there is perhaps a strange contradiction that the popular culture simultaneously accepts assisted-suicide measures as a “progressive step forward” while at the same time thinks it’s laudable to rejoice in the accomplishments of disabled athletes.

I say this because there is an underlying similarity between the two that leads to a contradiction that goes unnoticed: Assisted suicide is accepted because the popular belief is that people ought not suffer unfairly. Meanwhile, disabled athletes are exalted because they push through unfair suffering in order to accomplish great physical feats.

This is representative, in my opinion, of the logical end of the Liberal Utilitarianism that plagues our world.

What is Liberal Utilitarianism?

A concise description of Liberalism in the form we see today can be found in the book Liberalism is a Sin, written by Father Felix Sarda. In chapter two, the author offers the following description of Liberalism: It is “to recognize as valid and orthodox any belief that springs from the exercise of private judgment.” In essence, this means that Liberalism is dependent on relativism; the idea that one can ascertain and define truth based on private opinion or judgment. This is partly true, as certain truths must be understood by experience and individual rational thought. But relativist and Liberal thinking when followed all the way through can easily reject divine authority or revelation, especially from the Church.

Of course, there is something laudable, at least in principle, about the Classic Liberalism present in the minds of the American founders. Erroneous as they may have been in their approach to religious indifferentism, the popular narrative of them standing on principle in the face of conflict is something recognized as courageous. This is a paradox of Liberalism, as there is something virtuous behind the actions of a man who stands for what he believes; however, it is the very Liberalism that a man adopts that may lead him to dangerous errors.

The poisonous fruits of Liberalism have given us the advent of today’s Marxist Leftism, wherein reality is defined by the mob of politically correct actors who control the narrative; they are in charge, their beliefs will become ours, whether we like it or not. It should be noted that since the advent of Liberalism in Europe in the post-Reformation era, we have seen constant political and cultural revolution, seemingly without ceasing. As unfair as parts of ancient society may have been in some cases, there was as stability and a consistency of truth that has long since eroded.

Utilitarianism is an outgrowth of Liberalism. Utilitarianism is not possible under the Christian framework that preceded the Liberal framework, because Biblical understanding tells us that all men are created in the image and likeness of God. Thus, we cannot trample the rights on an innocent person, because it is akin to trampling the rights of God’s image.

Utilitarianism is the view that society is akin to a mass of actors within a larger organism that can be organized for the “greater good.” A classic Utilitarian mindset is a Socialist mindset, where the rights of various classes of people are trampled with the intention of pursuing an undefined – and untenable – equality. If a Utilitarian believes it necessary to sacrifice a person or group of persons for the “greater good,” then there is nothing stopping him, unless he personally believes in his own Liberal convictions that he must not harm someone else.

Furthermore, who are these supposed vulnerable people that we are to protect at all costs? They are the elderly and infirm, who have largely been sent off to pasture to rot away in nursing homes, and who are also the prime candidates for the medical assistance in dying that we are told is a basic human right.

So, we live in a time wherein the natural and divine law have been rejected in the name of a global Liberal Utilitarianism, where we applaud the disabled in sport while at the same time denying children a chance to play sports; while we send off our elderly and infirm to be cared for by strangers in a nursing home, where they are most vulnerable to disease; while we shut down the world to protect the elderly and infirm that we have placed in vulnerable places, because we believe we must protect the vulnerable; all while we believe that the disabled and elderly and infirm are prime candidates for a dignified death administered by the health-care system – a system that must be protected at all costs in order to care for those it seeks to euthanize.

Is there anything more absurd than the current state of affairs?

The moral and philosophical paradigm we see playing out before our very eyes is of course untenable, as it is based on contradiction. Perhaps, although painful to live through, we are now witnessing the collapse of the very framework that can only continue to devolve from here.