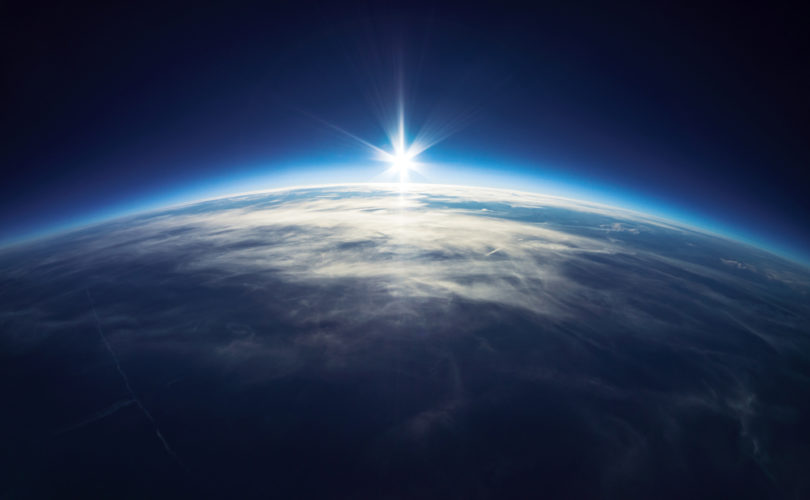 PARIS, December 15, 2015 (LifeSiteNews) – After two weeks of intense talks in Paris, negotiators from 195 countries came to a last-minute agreement on Saturday, several hours over the time limit set by the organizers of the COP21 or 21st Conference of the Parties to the United Nations Framework Convention on Climate Change. Tearful hugs were exchanged on the podium between French President François Hollande, Foreign Affairs minister Laurent Fabius, president of the event Ban Ki-moon, the United Nations Secretary general, and Christiana Figueres, the Costa-Rican executive secretary of the UN Framework Convention.

But was it really such a big step for humanity, as Fabius would have it? Roping in the majority of nations to fight “climate change” may seem a generous endeavor. Submitting supposedly free nations to a worldwide scheme to stop humankind from “warming” the Earth to a catastrophic degree, on the basis of questionable data, has deeper and more worrisome aspects.

The Paris text is not binding. Much as François Hollande would have wanted his presidential mandate to be marked not only by the COP21 agreement but also by the creation of an international climate tribunal that would have power to enforce it, negotiators were seemingly not convinced that the situation is all that bad. This is interesting, considering the nightmare scenarios being pumped out in the mainstream media with sickening regularity. People have been made scared enough to believe the COP21 has done a good job, because man is Nature’s prime predator, but arranging to punish those who are supposedly pushing the world towards disaster, famine, wars, terrorism and mass migration is just going a bit too far.

The main message being sent out by the COP21 – never mind global warming, carbon dioxide emissions and carbon footprints – is really quite simple, and this is where LifeSite and the pro-life movement come in. It is that the world is overpopulated, overcrowded, and hurtling towards massive destruction because every new soul on Earth is making matters worse.

Religious, Christian, and especially Catholic believers would say otherwise: life is a gift of God, every soul is precious and if things are so terribly wrong this side of Paradise it is first and foremost because of the rejection of God’s kingship over His Creation and the innumerable sins that cut human beings from grace.

While it cannot be expected of 195 representatives of every kind of nation to subscribe to this, the more so because lay politicians are in charge not of spiritual but of temporal things, the fact is that the Malthusian standpoint behind the “climate” conversation has led and will continue to lead international organizations and international Foundations to promote birth control, contraception, population control, “legal and safe” abortion, sex “education” and all the other instruments of the culture of death that are almost universally accepted in the “developed” nations.

Population controllers and “Greens” have criticized the COP21 as well as previous climate talks for omitting discussion about demography and the antinatalist policies they deem necessary to “save the Planet.” And indeed, the Paris agreement does not raise the issue at all, concentrating on carbon dioxide emissions that are supposed to be curtailed in order to keep temperatures “well under” 2° C more than prior to the industrial revolution – and even more so on the 100 billion dollars that will be transferred annually from the “developed” to the “developing” countries as of 2020 to finance their “energy transition.”

But like the captain’s horse, you can’t see it, but it’s there. International bodies such as the UN, the World Bank, and others promote “reproductive and sexual health” in exchange for international aid and while access to legal abortion is certainly not an international human right included in “reproductive health,” the anti-life message is being preached loud and clear by these institutions in the developing world. The climate agreement, in giving them more and more power through specialized institutions under UN control over the billions of public dollars that are going to help these countries switch over to expensive “renewable” energy, is not good news.

Nor is the fact that the Paris agreement is empowering “regional economic integration organizations” to become Parties to the agreement. This means that if the European Union, existing Free Trade regions and the future Transatlantic and Transpacific Treaty organizations, as well as continental free trade unions being built regionally in South America, Asia (where China and Russia are very much in the same boat), Africa and so on, will all be able to come on board and future climate change regulations will pass nations by.

The very first page of the COP21 agreement gives some interesting backlight to the whole affair: “Acknowledging that climate change is a common concern of humankind, Parties should, when taking action to address climate change, respect, promote and consider their respective obligations on human rights, the right to health, the rights of indigenous peoples, local communities, migrants, children, persons with disabilities and people in vulnerable situations and the right to development, as well as gender equality, empowerment of women and intergenerational equity…”

Migrants’ rights in European law have given way to “cultural rights” that oblige members of the EU to respect and protect ways of life, cultural customs and beliefs in traditionally Christian countries. Protecting “persons with disabilities” sounds like deep irony when aborting babies with genetic defects is seen as a right and a sign of advanced societies. Promoting “gender equality” leads to “gender mainstreaming”: slowly but surely erasing the complementary differences between men and women and negating their specific assets and inclinations. As to the “empowerment of women,” it is regularly quoted in the press and by population control movements as the non-coercive solution to bring down birthrates in “over” fertile countries. International agencies such as the United Nations Population Fund tout “empowerment of women” and “aims to ensure that every pregnancy is wanted.”

In the same way the agreement does not openly advocate Nature worship but does note “the importance of ensuring the integrity of all ecosystems, including oceans, and the protection of biodiversity, recognized by some cultures as Mother Earth, and noting the importance for some of the concept of ‘climate justice’, when taking action to address climate change.”

This is a new double form of “class struggle”: between man and other species on the one hand, between North and South, developed and developing nations on the other. That is what justifies the handing over of billions to the developing nations as well as the projected scrapping of fossil fuels that today make up 85 percent of human energy consumption.

Looking at the agreement more closely, it appears that the brunt of the promises made in Paris is to bear on the developed world, which has committed to turn to expensive, heavily subsidized and uncertain “renewables” such as solar and wind power – heavily dependent on the weather. Developing nations will have a lasting reprieve.

That includes developing countries such as Russia, India, China… Yes, the world’s first economy to date, has negotiated fiercely and like all the rest, spoken of the moral obligation to keep carbon dioxide emissions down, but it also announced its intention to build over 2,000 coal plants. China already accounts for twice as many CO2 emissions as the USA, and it intends to add to those emissions heavily up to 2030. Cheap energy and added handicaps to Western industries are, for them, all to the good.

All in all, despite the COP21 agreement, there isn’t really a chance that carbon dioxide emissions will decrease or even be contained over the coming years. This is a reality that the negotiators cannot have overlooked. It points to the fact that the whole climate scare is giving birth to a new international “order” in which the culture of death can become a driving force.