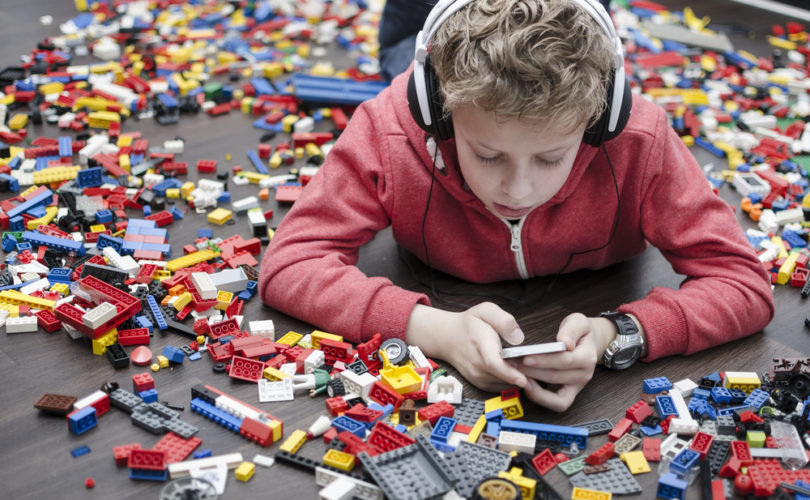 I never thought it would happen to me.  I’m technologically savvy, hyper-vigilant about parental controls, and frequently check the search and browser histories of my kids’ electronic devices.  As a writer for LSN, I’m more aware than most people of the filth that’s out there and the harmful effects it can have on a developing brain (not to mention a developing soul).  So that’s why I was surprised and heartbroken the day I discovered my ten-year-old son had been watching hardcore pornography on his iPhone.

It was the first day of final exams.  At the bus stop that morning, my son suddenly tossed me his phone. “Hey, I forgot, I can’t have this at school during testing week,” he said.  “Can you go put it on the charger for me?”

As I caught the device, I realized that it had been a couple of weeks since I had checked his searches.  With a busy senior in the house cramming for her AP exams and getting ready for prom, a fourth-grader frantically trying to bring up his Geography score after a failed state capitals test, and a kindergartener whose math homework consists of the sort of activities that eat up an hour of your night (Make a cutout of your foot.  Use it to measure every room in your house in “feet.” No, I did not make that up), it had simply slipped my mind.

And I really felt I had no reason to worry – previous spot checks of his search history had turned up things like “what is the worst tasting drink in the world,” “why are farts so awesome,” and “giant ship from star trek into darkness.”  This is a boy who blushes at the mere mention of the girl he likes, and who I was pretty sure was in danger of fainting the first time she grabbed his hand to hold.  So, what I was expecting to find in his search history was a peek into the mind of an innocent and slightly geeky ten-year-old boy with an affinity for fart jokes.

What I found was a lot darker than that.  As soon as I brought up the history, my stomach sank.  The search terms told the story in stark, broken phrases – most of which I can’t even print here because they’re too explicit.

It all started innocently enough – he apparently searched for an “underwear mod for Minecraft,” presumably because he thought it would be hilarious to see Steve walking around in his underpants.  That seemingly innocuous search obviously brought up tangentially related results he wasn’t prepared to see, and his search terms quickly shifted in a more disturbing direction.  “Naked people.”  “Naked boys.”  “Naked men.”  “What is gay?”  The browser history was even worse – search terms like that naturally led him straight to the bowels of the internet – including a porn video that traumatized me just by reading the title.  I didn’t have the heart to watch it, but knowing my little boy probably had – I was shattered.

My heart broke for him as I realized what must have been going on in his innocent young mind.  It all started with a relatively innocent search, and his curiosity took him from there.  Unfortunately it took him to places he never wanted to go, and he was left wondering about his own sexuality just because he’d stumbled across some naked pictures on the internet.

When he got home, I sat him down and confronted him, gently, about what I’d found.  He instantly broke down in tears, heaving sobs of the kind I hadn’t seen him cry since he was small enough to climb up onto my lap for comfort.  At five feet-plus and 75 pounds, lap-sitting wasn’t an option, so I just gathered him into my arms and held him until he was calm enough to speak.  What he told me broke my heart all over again.

We talked for a long time.  I told him that what he had seen wasn’t normal, wasn’t real sexuality.  I explained, for the first time, in explicit but appropriate terms, exactly what sex is and what it is for, and that it’s something God wants us to save for marriage so that all the babies who come from sex will have moms and dads to love them and raise them.  I asked him if he thought he was gay.  He said he didn’t know.  I pointed out that all his crushes have been on girls, and that seemed to reassure him.  I told him it was normal to be curious about people’s bodies and about sex, but that if he ever has questions, he needs to ask me or his dad, not Siri or Google.

I told him that he was absolutely not in trouble, but that I would be taking his phone away until I could figure out how to protect him from ever seeing those things again.

It turns out that in iOS7, you can block explicit searches, so I upgraded his software from iOS6 and activated the stricter parental controls.  (He has an iPhone 4S and hadn’t previously wanted to upgrade out of concerns about possible performance issues.  That hasn’t been a problem, FYI. iOS7 runs fine on the older device.)  I also installed a new browser on the phone that sends me daily reports of every site he’s visited, and double checked that his laptop computer’s safety controls were similarly up to snuff.  (The laptop, surprisingly, has not been a problem – it turns out it’s much easier to control what he can access there than it is on a phone.)

Finally, I told my son that for at least a little while, I’d require him to be in the physical presence of a parent in order to use any internet-connected device, just so we can keep an eye on him and make sure he’s safe.  To my surprise, he was absolutely fine with that – he seemed comforted, even.

The last thing I did was hand him a copy of The Boy’s Body Book.  I explained that his body and feelings are about to start changing in big ways, and that the book would help him know what to expect.  I told him we could read it together, or he could read it on his own, but that I would always be available to answer any question he has about sex or his feelings, and I will always tell him the truth, and he’ll never be in trouble for asking.

It’s been a little over two months now, and all is well.  He’s gradually earned access back to his devices, although, I still require him to be in a public area while using them.  I doubt he’ll go looking again for naked people for a long, long time.

That doesn’t mean I won’t keep constant vigilance, though.  I’ve learned my lesson.

For a good introduction to keeping kids safe online, check out “How to Childproof the Internet” at PCWorld.

Note: Abby Moore is a pseudonym for a LifeSiteNews writer who wishes to protect her family's anonymity.