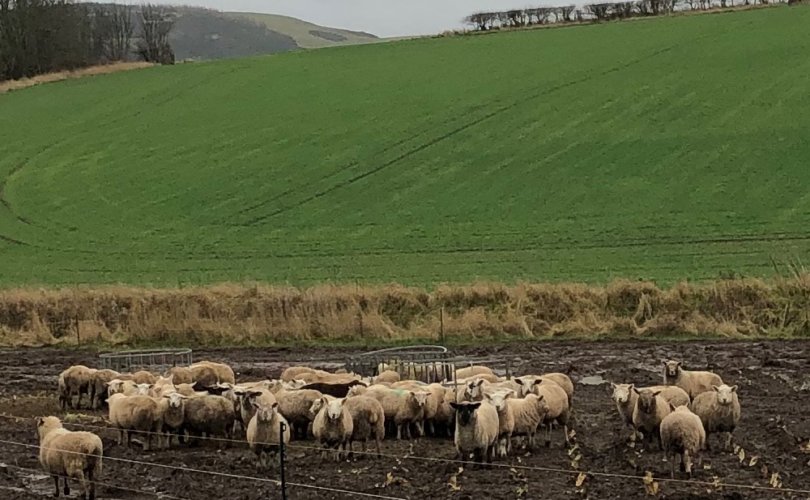 EDINBURGH, Scotland (LifeSiteNews) — Christmas this year will most probably include sheep.

My husband and I have once again been invited to spend Christmas Day with friends in the countryside of Fife, which is a peninsula bordered by the Firth of Forth to the south, the Firth of Tay to the north, and the North Sea to the east. We will be just north of the 56th parallel, which means north of almost all of you, but I expect the hilly landscape to be richly green, with dark pine trees and juicy grass for the sheep to nibble if they get tired of brussels sprouts.

Yes, brussels sprouts. The British are mad for brussels sprouts at Christmas, and the harvest is so enormous that the green globes currently cost 19 pence a packet at our local grocery store. Once the Fife sprouts are harvested, the sheep are allowed into the sprout fields to gobble up their own Yuletide feast. When we walked past them last Boxing Day, they looked enormous and belligerent, as if they thought we might take away their treat.

I have photographs of these jealous sheep and of my husband walking along a muddy track in green tweed and Wellington boots with our hosts’ black Labrador. Man and dog together look like models in a British country clothing catalogue. The sky in the photos is pale mauve, which suggests that it was just after 3:30 in the afternoon and the sun was setting when I took them. It wasn’t raining, but we had such a long walk that we were happy to get back inside our friends’ Georgian farmhouse, have a drink, sit by the fire, and anticipate another glorious feast.

Of course, the feast of feasts was on Christmas Day, two or three hours after the last Traditional Latin Christmas Mass was celebrated in Edinburgh. We got to Fife by car, and the highways and byways were all but empty. As I listened to the cheerful Scottish conversation up front, I admired the small cottages and stone walls that flashed by, the impressive farmhouses, the abandoned castles, the horses here and there, the herds of cattle and, of course, the sheep that looked up from their sprouts as we passed.

I recall the beaming daughters of the house, a massive Christmas tree in the front hall, a fire in the sitting-room, a fire in the dining-room, delicious pâté brought back from France, succulent goose, a very American sweet potato dish, and a flaming Christmas pudding. Naturally there were exploding Christmas crackers, paper hats, and the ritual reading of the enclosed jokes. G.K. Chesterton would have felt perfectly at home, and he certainly would have been warmly welcomed.

Home decorating magazines of my childhood used to feature much Scottish plaid in their Christmas issues, and I think this must have stemmed from the Christmases Queen Victoria and her family enjoyed farther north at Balmoral Castle in Aberdeenshire. The Queen and her German husband Prince Albert popularized the German Christmas tree in the United Kingdom—or rather, the royalty mad newspapers of the 1840s wrote about every detail of their Christmas celebrations, and those of the Queen’s loyal subjects who could afford to do so copied them. Victoria and Albert built Balmoral Castle in 1853 and, being fond of tartan in their culturally appropriating way, decked out whole rooms in plaid and encouraged the wearing of kilts, tartan skirts, sashes, and the whole nine yards. Plaid Christmas was born.

Actual Scots, at least today, tend to reserve tartan for decorating tourists’ cottages and tartan kilts for weddings and international rugby tournaments. Therefore, I regret to inform you that the décor of this otherwise romantically Scottish Christmas did not involve any plaid.

But it did involve a lot of wine, so I don’t remember if we played parlour games that Christmas night and then said the Rosary in English, French, and Latin as the sitting-room fire burned down. But thinking back over many wonderful visits to Fife, I rather think we did. Following party games or songs with the Rosary is the custom of that wonderfulhouse.

Sometimes I imagine other Scottish Catholics praying the Rosary by their countryside hearths in times even less accommodating to Catholicism. In Britain we call those dark centuries the Penal Times and, in a sense, they had come back for a few months—this time for every worshipper in Scotland—that March. Forced church closures were to return in January 2021—but soon to be overturned by a court that pronounced them “unlawful.”

Many belated thanks to Canon (Father) Tom White, Dr. William Phillip, and the two-dozen other Christian pastors in the ecumenical group that fought for our freedoms, by the way. Thanks also to the priests, women religious and (I suspect) bishops, who did what they could to bring comfort and hope to the Scottish faithful.

We had all been through a lot in 2020, and we have all gone through a lot more this year, too. However, the memories of last Christmas have cheered me up very much during 2021, just as the hope of a similar Christmas cheers me now. I am looking forward to so many good things—cooking Christmas Eve supper, baking the Christmas morning bun, assembling the Christmas dinner trifle, opening the presents, seeing our friends, admiring the sheep—that the shocks and horrors of recent weeks have receded into the background.