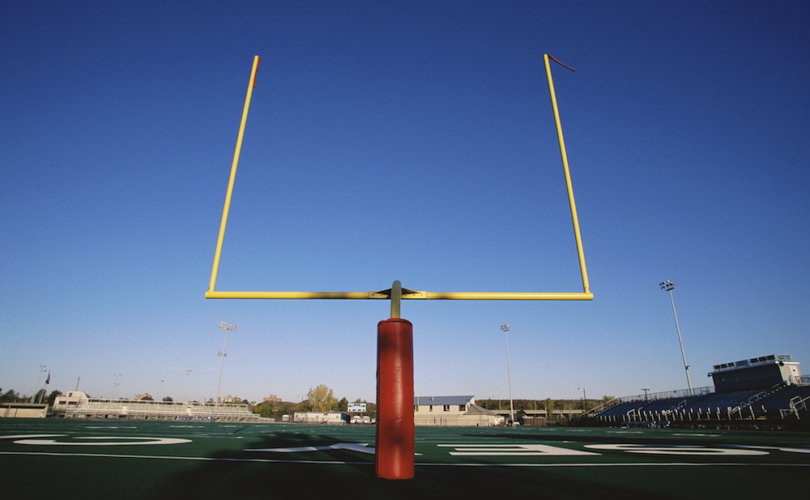 When Christ is denied all rights of citizenship, those same rights are denied to men; and when the ‘death of god’ is proclaimed, the ‘death of man’ is being planned as well.

Now to the football game!!

There are two teams on the field, one team in red jerseys and the other team in blue jerseys. The  field is marked by yard lines; however, the goal posts are supported by the Culture of Death in the center post and crossbar and the uprights represent “death of God” on the right and “death of man” on the left.

Over history, the games play out in this way. The red team typically moves the yard markers downfield with little opposition and during the course of a game scores a number of touchdowns, sometimes adding two-point conversions. The team in red jerseys seldom, if ever, has to resort to kicking a field goal.

Then the team with the red jerseys takes possession of the ball again and moves ever closer to the goal post – the Culture of Death.

One can only imagine what the score will be by the end of the fourth quarter.

In the pregame huddle, the quarterback for the red team tells the players that if they want to play they must worship his pro-abortion–pro-death ideology. The quarterback also promotes the team through appearances in various parades and numerous photo-op charades.

There you have it, folks — the sad reality of this game of Canadian football!!!