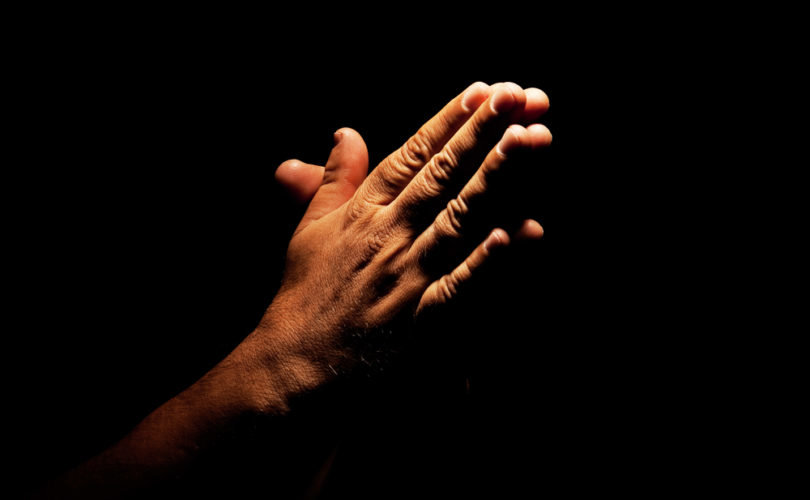 March 23, 2015 (RobertColquhoun.com) — Some people ask if prayer helps to end abortion. They believe action or pro-life apologetics are more effective than prayer. Some believe prayer is more private and unlikely to impact others. Others see that people don’t share our faith, and that we are more likely to alienate them rather than convince or covert them.

In James 5:16 we read, “The prayer of a righteous person has great power in its effects.” When Elijah prayed for rain it rained. When he prayed it would not rain, it did not for 3 years and 6 months. In Mark 11:24 we read, “I tell you, whatever you ask in prayer, believe that you have received it, and it will be yours.” In John 14:13-4 it is said, “Whatever you ask for in my name, this I will do… If you ask me anything in my name, I will do it.” In John 15:7 it says, “If you abide in me, and my words abide in you, ask whatever you wish, and it will be done for you.”

These are all radical passages demonstrating the immense efficacy of prayer, and how God can work miracles for anything we ask in the right spirit in his name. I cannot fully comprehend what God thinks of the sacrifice of millions of innocent unborn children through the violence of abortion. Yet I have personally witnessed hundreds of children who have been saved from abortion through the power of prayer. Some children have been spiritually but not physically aborted. The mother has lost hope, and has decided to abort her child, but has not actually aborted just yet. But at the very last moment, the offer of help along with prayer can lead to a change of heart, and the life of the baby can be spared. Every life is a gift, and through “prayer without ceasing” (1 Thessalonians 5), we know that our witness, faith and goodwill can impact families for generations to come. Mother Theresa said, “If people spent an hour a week in Eucharistic adoration, abortion would be ended.” John Paul II said that, “Prayer united with sacrifice is the most powerful force in human history.”

Jacquie was a lady who had a very brief holiday romance during the trip of a lifetime. She was on the pill and did not think much about her relationship after it finished. She found herself pregnant and had worries about debts and thought a child might destroy all her future plans and hopes. Jacquie and her mum wanted to respect the child’s life, but knew her father would think her stupid for keeping the baby in such circumstances. Jacquie met a pavement counsellor in London and sought counselling. Prayers were offered for her, along with encouragement and promise of financial support. The outcome was that Jacquie kept her baby. Her financial situation improved when the baby was born. Her grandparents loved the baby and saw Jacquie achieve her goals in her career with the support and prayers of pro-lifers. Jacquie is just one woman who has been helped through prayer to choose life rather than abortion.

In 1 Chronicles 4:10, Jabez cried out to God, “Oh, that you would bless me and enlarge my territory! Let your hand be with me, and keep me from harm so that I will be free from pain.” And God granted his request. Imagine how many more lives we could save from abortion, if we had the faith of Jabez, praying to enlarge the work of saving the lives of unborn children. How many more children could be alive today with great vision to see entire countries where no more children die, and no women cry from the wounds of abortion.

God will grant our prayer if it is asked for in the right spirit, he will be happy to comply. Intercession works. Anything we ask in his name, God will do. He can bring more miracles than we can possible imagine. Our heads find it difficult to comprehend the infinite mercy of God. Some things seem impossible, like the ending of abortion. But with God, all things are possible. I have heard stories of abortion workers walk up to Christian prayer volunteers to tell them that their prayers are clearly working. I have heard of miracles rallies where over 200 miracles have happened – all because people asked for them to happen.

Prayer is about raising our hearts and minds to God, to unite our will to the will of God. God can accomplish more than we possibly can imagine than our own puny efforts. God works powerfully through the prayers of those who are close to him. Our first prayers might be to realise our distance from God, and seek his face. Prayer is not about us, but about him. It is not about our will, but his will, united with ours. Beliefs are powerful, and they help to create the reality of our world. In the garden of Gethsemane, Jesus prays that the will of the father be accomplished. Not every prayer is necessarily granted, but it will be acknowledged. Prayer even works in secular countries too! St Patrick managed to evangelise the whole pagan country of Ireland – a national transformation of belief is possible in our age too.

When we pray to access the power of God, we have to remember how profoundly God has acted through salvation history to bring immense changes. Seas have been parted, countless miracles conducted. There is no reason why these epic and immense acts cannot happen today, through prayer, God can end abortion. For when people no longer believe in abortion it will quickly and rapidly come crashing to a halt. God is already working powerfully every day, through the hearts and minds of those that love him. The question remains whether we are going to be people who work with him, or work against his plans for every human person. The power of redemptive suffering, we can transform the lives of others. We are ‘co-workers’ with God (1 Cor 3:9) called to make up what is lacking in the sufferings of Christ, to build up his body, which is the Church (Col 1:24). By being ‘partakers in the divine nature’ (2 Pet 1:4), and co-heirs with Christ in grace (Rom 8:17) we can participate in the redemptive work of God more fruitfully.

Pray and ask God to show you how he wants you to end abortion where you live. Pray for courage, boldness to ask for great things in prayer, that God can work in and through you to save lives in your local community and beyond. You might be astonished by the results.