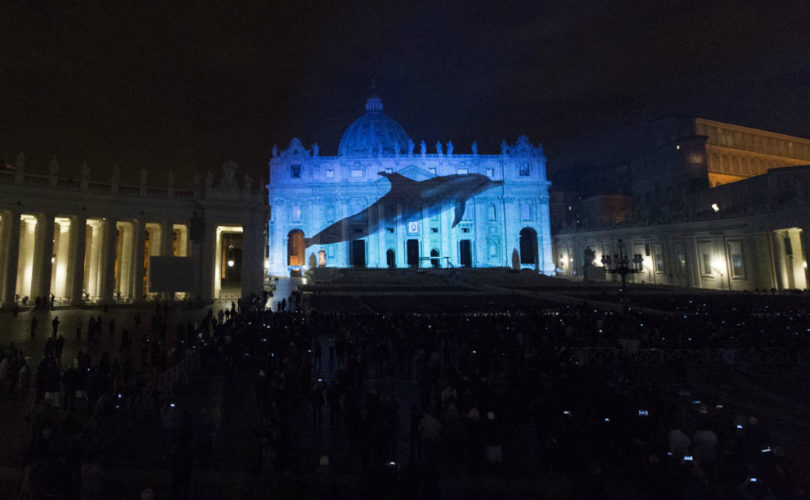 December 9, 2015 (CatholicCulture) – Almost as soon as the Year of Mercy was formally opened, the concept of Divine Mercy was trivialized by a light show, with images of the environment displayed across the façade of St. Peter’s basilica.

Pope Francis took pains, in Laudato Si’, to draw a connection between the faith of the Catholic Church and the public concern for environmental degradation. But there was no effort to integrate faith into this show; it was a purely secular display.

(Sure, a few folks have tried to discover a hidden religious symbol. Was the dove a reference to the Holy Spirit? Was that the Lion of Judah? Relax. You’re straining yourself. It’s not there.)

What the picture show did accomplish was to draw public attention away from God’s mercy, toward a political cause. For all practical purposes, this was a campaign advertisement, produced by foundations that are backed by some of the world’s wealthiest individuals.

Granted, the show was an impressive technical achievement. If it had been displayed against a massive flat screen, no one should have objected. Then again, not many people would have noticed. The show drew worldwide attention precisely because it was displayed on the Vatican basilica.

The façade of St. Peter’s is not just another large building, providing a mostly flat background. It is a sacred space: a building dedicated to divine worship. It is also a universally recognized symbol of the Catholic faith. The message of the light show was to put environmentalism in the foreground, with the Catholic faith serving as a backdrop.

Could this show have been staged against the Western Wall of the Temple in Jerusalem? I hope not; the idea is repugnant. Yet it was staged in St. Peter’s Square with the active endorsement of the Vatican. Why?

This environmentalist show could also have been displayed against a background redolent of natural beauty: the wall of the Grand Canyon, say; or the white cliffs of Dover. Such a site would have seemed far more consistent with the message of the show. But again, the producers had a specific goal in mind: to enlist religious support, without supporting religion.