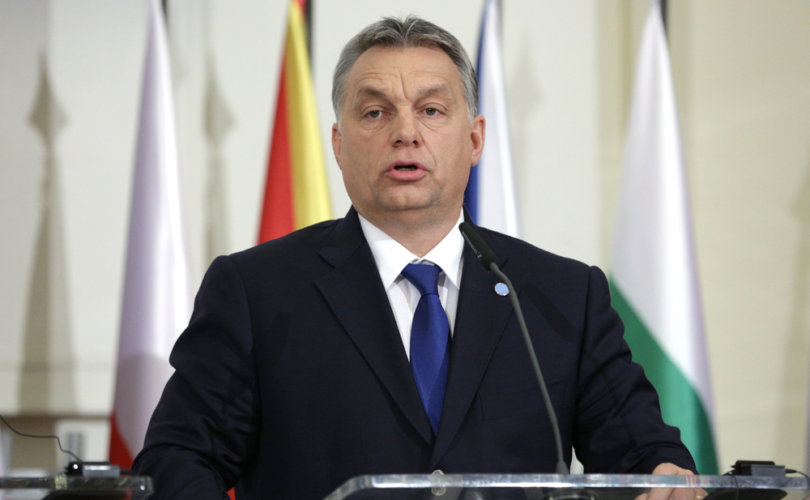 (LifeSiteNews) — The deadline for a decision on whether Hungary will be sanctioned by the EU under article 7 has been reached. Saturday, November 19 is the day on which the European Union will decide whether to release or withhold over 14 billion euros in funding. The stakes are high for both sides.

One one side is the defense of EU values and on the other the Hungarian economy. It is expected to end with the disbursement of the money, which accounts for ten percent of Hungarian GDP – but not without some “serious conditions”. How did it come to this?

This is the culmination of a process which began in January 2000, with the election of Jorg Haider in Austria. The EU was horrified to see a man come to power who did not share their progressive values. A process was initiated to isolate and neutralise any political development which disagreed with the European Union’s decision on which opinions are acceptable.

Article 7 was the result of this process, which provided for the application of sanctions to any member state whose government policies represent ‘a serious and persistent breach with the values [of the EU]’. As with every measure taken by liberal democracies to limit liberty, it was said that such a procedure would never be used.

It was first used against Poland, with proceedings initiated in 2017 which have resulted in the suspension of 36 billion euros of EU funding. Poland’s crime was to have elected the Law and Justice Party, which upholds Catholic family values and defends traditional ways of life. The scandal in the eyes of the EU was the government’s reform of the judiciary, to which it appointed many people sympathetic to its policies.

Imagine for a second that the United States could have a significant portion of its budget confiscated because the winning party appointed people who support it to positions of power. Now imagine the same scandal over attorneys winning office who have been backed by George Soros.

The article 7 proceedings against Poland have not been resolved. They appear to be frozen for now, with the EU looking to the elections in 2023 as a potential point of leverage. Vote for a party celebrating EU values and you can have your money back, it seems to say.

The EU has decided to make an example of the Hungarians to increase its leverage in next year’s Polish elections. If the government of Hungary and its extremely popular leader Viktor Orban can be humiliated, it will send a clear lesson to the people of Poland as to which way they ought to vote.

The EU once again alleges that Hungary has undermined the rule of law, as well as being in ‘serious and persistent’ breach with EU values. The process moved on in 2019, when the European Commission began a lengthy legal process in the EU’s top court against Hungary. On the day of the meeting of the European Council to discuss these measures, Zoltán Kovács, Hungarian state secretary for international communication and relations, shared his opinion of the Council and its sympathies:

“The Soros orchestra is about ready to take the stage,” he said, in a tweet picturing the Council chamber, which was later deleted. His remarks provoked outrage – but no denial. In fact, the European Court returned in October 2020 with a verdict against Hungary for the crime of passing a higher education law “that forced the Central European University (CEU) funded by George Soros out of the country.”

Viktor Orban’s party did indeed pass a ‘Stop Soros’ bill, resulting in the closure of George Soros’ Central European University in Budapest and the relocation of Soros’ Open Society Foundation to Berlin. Described as a ‘grant making body’, Soros’ foundation is active globally in sponsoring exactly the type of progressivism beloved of the EU and its ideological allies, as well as financing the elections of sympathetic officials across the EU, the USA, and elsewhere.

The charge sheet also includes Hungary’s law that “criminalises helping refugees and migrants” which is a cheap shot at the measures taken by Orban’s first administration to secure the borders of Hungary against the massive migration wave invited by Angela Merkel. Hungary has, as a result, suffered none of the horrendous social problems seen in places such as Sweden.

The Sweden Democrats – another party whose sane views cause deep concern in the EU – have recently been propelled to power by the division of society into parallel cultures caused by mass immigration. They won the recent election by running on this very issue.

To protect your nation is apparently contrary to the values of the EU, and it is likely that Sweden will soon attract the attention of the values police of Europe.

The Hungarian foreign minister, Peter Szijjártó, gives further insight into the nature of these values. Hungary’s legislation to protect the traditional family has attracted fierce criticism, notably for the passing of anti-paedophile laws and measures taken to prevent the exposure of children to paraphilias such as sexual identitarianism and the transgender trend.

“Should Brussels bureaucrats or western European politicians tell us if we can protect our children? No way,” he said in defence of stringent measures to protect Hungarian children from these influences.

The broader picture around article 7 reveals it as an instrument of ideological discipline. It was invented to punish any government which did not agree with the post-national rainbow values of the EU. It is a means of applying sanctions to enforce compliance. You are free to disagree, but you will be financially ruined for daring to do so. The goal is the manipulation of elections and the moulding of national policy, in a concerted process to dissolve national sovereignty.

Ultimately the issue is not one of values and who is to promote them – it is the question of power in action. Who is in charge – the people from whom you voted for, or the people for whom you did not? The unelected elites of the EU have invented this process to force regime change in member states who still consider themselves the masters of their own fates. In the words of the Hungarian Foreign minister, “The procedure launched against Hungary under Article 7 of the EU Treaty has nothing to do with facts; it is rather meant to be applied as a means of political blackmail.”

So far it has failed. What comes next will reveal how far the EU is prepared to go to impose its ideology. It is make or break for the Hungarian economy, in a move which may have far reaching consequences for the already strained alliance of the European Union.