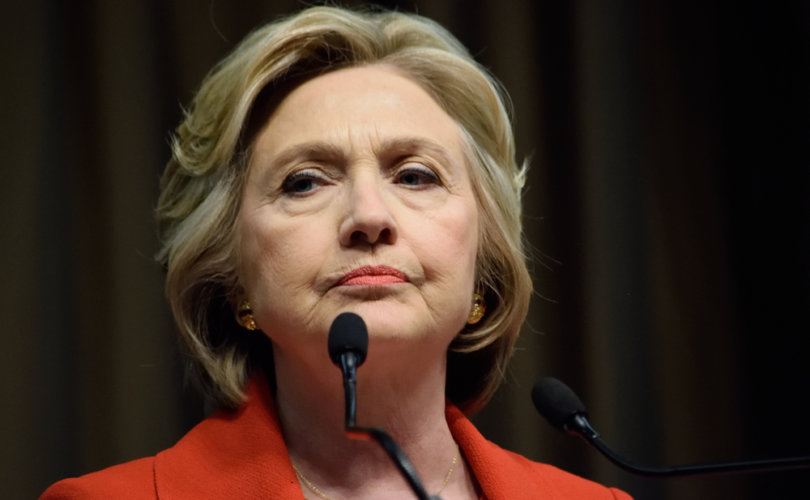 October 10, 2016 (LifeSiteNews) — Hillary Clinton’s reference to half of Donald Trump’s supporters being a “basket of deplorables … racist, sexist, homophobic” (Chozick, 2016) is an example of an entrenched and growing bigotry in America. That bigotry is directed towards social conservatives, in particular conservative Christians. From my study and analysis of American culture I have found that individuals who associate bigotry with conservative Christians are often themselves displaying a bias that fits the definition of bigotry. This concept runs counter to the political correctness and self-righteousness of liberal ideology, but unfortunately, it has become a reality.

The Merriam-Webster simple definition of a bigot is: “a person who strongly and unfairly dislikes other people, ideas, etc. : a bigoted person; especially : a person who hates or refuses to accept the members of a particular group (such as a racial or religious group)” (Merriam-Webster, 2016). The key elements to bigotry are a strong dislike or hatred toward a group of people along with unfair or false reasons for disliking them. It is universally accepted that racism and anti-Semitism are forms of bigotry, because they involve a strong dislike of a group of people for unfair reasons. It is important to note that people can have a strong dislike of certain individuals of another race or religion for good reasons without disliking the people of that particular race or religion. They are not bigots. In the same respect a person may, for good reasons, strongly dislike certain people of their own race and religion. That is not bigotry.

The term “homophobia” was created by psychologist George Weinberg to offer an alternative to the clinical science that showed homosexuality to often be a psychologically based disorder or a symptom of such a disorder (Weinberg, 1991/1972). The term soon morphed into a strategic tool of the gay rights movement. Psychiatrist David McWhirter and psychologist Andrew Mattison, both homosexuals themselves, gave testimony to this fact:

The invention of the word homophobia came at a point in time shortly after the emergence of the gay liberation movement. Although intended as a psychological term to mean fear of being or being thought gay, and fear of gays, it was quickly incorporated into gay liberationist language as a political epithet to be hurled as an insult at any and all opposition to the progress of the gay rights movement (McWhirter & Mattison, 1984, p. 138).

According to the definition of homophobia, someone who is homophobic is not necessarily a bigot. A fear of being gay, being thought gay, a fear of gays, or opposition to the gay rights movement cannot be bigotry unless that person has a strong dislike of gays. That is the litmus test. The terms homophobic and bigot are not synonymous, and it should be pointed out that rational opposition to the gay rights movement is not a fear of anything.

The overwhelming majority of conservative Christians who are in opposition to many key objectives of the gay rights movement do not dislike gay people. They have many reasons to strongly object to homosexuality being promoted as equal to heterosexuality, as well as many reasons to show love and kindness toward gay people. The Bible forbids homosexual behavior in both the Old and New Testaments, such as in Leviticus 18:22 and 1 Corinthians 6:9-10. First Corinthians 6:9-10 refers to those who engage in homosexual behavior as “the unrighteous” and warns they “will not inherit the Kingdom of God” (NKJV). This passage also describes those who engage in adultery, heterosexual promiscuity, stealing, drunkenness, idolatry, and swindling in the same way. Fortunately, according to the Bible, repentance is followed by the forgiveness of sin through Jesus Christ’s sacrifice on the cross, whereby “the righteousness of God” is imputed to those who believe in Jesus the Christ (2 Corinthians 5:18-21 NKJV). People who believe the Bible is the Word of God oppose the normalization of homosexual behavior because it normalizes what the Bible calls unrighteous.

There are also scientifically based reasons for conservative Christians to oppose the normalization of homosexuality. Homosexual behavior is associated with greater health risks. Although male homosexuals constitute somewhere between 2 and 4 percent of the American male population, in 2014 they accounted for 83 percent of all new HIV cases in males 13 years and older (CDC, 2016, HIV), and “for 83% of all P&S [primary and secondary] syphilis cases among males in which [the] sex of [the] sex partner was known” (CDC, 2016, Syphilis). These facts are good reasons to oppose the normalization of homosexuality.

As a group, conservative Christians do not meet the criteria for a bigot. They may strongly disagree with the objectives of the gay rights movement and people who promote those objectives, but they do not strongly dislike gay people. Christians are commanded to show kindness and patience, and to even love their enemies (Galatians 5:22; Matthew 5:44 NIV). Ultimately, Christians have good reasons for opposing the gay rights objectives that are at odds with their religious beliefs, increase the health risks of youth, and suppress the clinical science on homosexuality.

As shown in the quote above by McWhirter and Mattison, the term “homophobia,” and its derivative “homophobic,” are used as an epithet. When a gay activist or liberal calls a person homophobic, it is to disparage that person: to ridicule them, belittle them, insult them, mock them, and even scorn them. To call someone homophobic shows strong dislike for that person. To call a group of people homophobic is to strongly dislike that group of people.

On September 9, 2016 Hillary Clinton called half of Donald Trump’s supporters a “basket of deplorables.” She put many in that basket for being “homophobic.” She wasn’t referring to a particular person, but to a particular group of people. The group that best fits her description is conservative Christians. They not only oppose gay marriage and the normalization of homosexuality, they voice the strongest opposition to those LGBTQ objectives. It is significant that Clinton’s comments came at an LGBTQ fundraiser for Clinton in New York City, where she warned that Trump would appoint Supreme Court Justices who would overturn the gay marriage decision. It is beyond a reasonable question of doubt that Clinton was referring to conservative Christians as homophobic and deplorables. Her comments expressed a strong dislike of a religious group for unfair reasons. In every sense of the definition her comments showed bigotry.

Hillary Clinton’s disparaging comments were reflective of the bigotry conservative Christians face in today’s America. It has, in a sense, become a politically correct bigotry, entrenched in the universities and filtering down into the public school system. It is an underlying motive behind the harassment and marginalization of Christians in twenty-first century America.

Thomas Coy earned his Master of Liberal Studies at the University of Michigan-Flint with a major in American culture in 2012. His master’s thesis was titled “The Professional Division Over the Treatment of Homosexuality and How It Has Been Influenced by the Gay Political Movement.” The thesis is available at Deep Blue and Proquest Dissertation & Theses Global.

Hamilton, D. (1939).  Some aspects of homosexuality in relation to total personality development. The Psychiatric Quarterly, 13, 229-244.

Poe, J. S. (1952). The successful treatment of a 40 year old passive homosexual based on an adaptational view of sexual behavior. Psychoanalytic Review, 39, 23-33.

Wortis, J. (1940). Intersexuality and effeminacy in the male homosexual. American Journal of Orthopsychiatry, 3, 567-570.