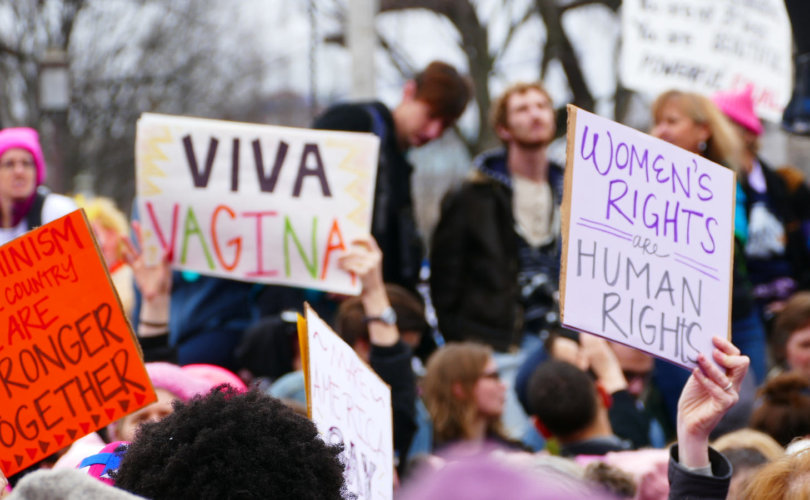 The Women’s March has essentially declared that pro-life women do not have a place at this event, even if a woman is an ally on every other issue that the protest claims to fight for.Claire Chretien / LifeSiteNews

January 19, 2017 (LifeSiteNews) — I am a woman, and yet the Women’s March on Washington does not represent me.

This is not because of any prejudice I hold – I do not hate women, nor do I suffer from any “internalized misogyny”. No, the Women’s March does not represent me because they have chosen not to.

You see, the Women’s March only believes in the pro-choice buzzword when you choose to agree with them.

As you may have heard, women from across the country are organizing to take part in the Women’s March on Washington on January 21st – one day after President-elect Donald J. Trump’s inauguration – as a way to protest the incoming administration.

RELATED: See Slideshow of photos taken by LifeSite staff at the Women's March

According to their mission statement, they aim to “join in diversity” while sending “a bold message to our new government on their first day in office, and to the world that women’s rights are human rights.” The statement goes on to elaborate on their reasons for rallying against Trump, claiming that “the rhetoric of the past election cycle has insulted, demonized, and threatened” women of all different communities.

All of these well-intentioned statements might have at least maintained consistency if they had not then immediately violated their very own mission statement.

Yesterday, the Women’s March organization made headlines by removing New Wave Feminists, a pro-life women’s group, as an official event sponsor. The Women’s March released a statement to defend their decision, apologizing for “the error” of having previously listed an “anti-choice” group as a partner. They also made it clear that they only wish to march on behalf of those who share the pro-abortion mindset.

Are you starting to see the hypocrisy yet?

For a women’s group who sings the praises of diversity and tolerance throughout the “About” section of their website, it is quite duplicitous to then publicly disavow a women’s group simply for holding a different opinion.

But this is what the Left is known for championing – diversity in all things, except diversity of thought.

Prior to the release of the official statement, Guardian columnist and self-proclaimed feminist, Jessica Valenti, tweeted yesterday that she was “horrified” that the Women’s March had partnered with a pro-life group, insisting that women need to “stop the myth that feminism is simply ‘anything a woman does.’” — in other words, if a woman does not think or act in line with their specific brand of feminism, she does not count as a woman.

“We call on all defenders of human rights to join us,” the Women’s March website states.

The Women’s March has essentially declared that pro-life women do not have a place at this event, even if a woman is an ally on every other issue that the protest claims to fight for.

This line of thinking is not only ignorant, it is self-defeating.

When the Roe v. Wade decision was handed down, the medical understanding of when life began was largely unclear, mostly due to a lack of evidence provided by the relatively young discipline of embryology. The issue of viability also lacked sufficient medical understanding. But as medical technology has advanced, the humanity of the unborn continues to be affirmed within the scientific community.

Now that we know that human life begins at conception and that babies born as early as 22 weeks are setting the new viability standard, the millennial generation has been trending toward the pro-life point of view, giving rise to a new kind of civil rights movement.

Additionally, the latest report from the Guttmacher Institute has found that the number of abortions in the US has dropped to its lowest level since 1974.

These numbers spell doom for any women’s group that demands conformity of thought and a pro-abortion litmus test.

As a pro-life woman and millennial activist, it is frustrating to be misrepresented by those who claim to have women’s interests at heart.

To be a pro-life woman is to believe in modern medical science and to champion human rights for all — including the unborn.

You cannot boast advocacy for human rights while simultaneously denying the humanity of unborn human beings. You can’t even advocate for all women’s rights while fighting against the inalienable right to life of the developing young woman in the womb.

The Women’s March claims to recognize that “defending the most marginalized among us is defending all of us” — but how can they not realize that the most marginalized group in America is the unborn? No other group in the country has been targeted for mass murder: more than 54 million babies have been killed since the Roe V Wade decision in 1973.

But maybe the most ironic twist in the decision to remove a pro-life sponsor from the Women’s March is that, in so doing, they are showcasing the same divisive, intolerant, and discriminatory qualities as the Trump-esque rhetoric they claim to march against.

Perhaps the Women’s March could benefit from further study of the Audre Lorde quote they selected to close their mission statement, which reads: “It is not our differences that divide us. It is our inability to recognize, accept, and celebrate those differences.”

Kelsey Kurtinitis is a board member of Personhood Iowa, an editor for The Liberty Conservative, a millennial mom, and a pro-life activist.