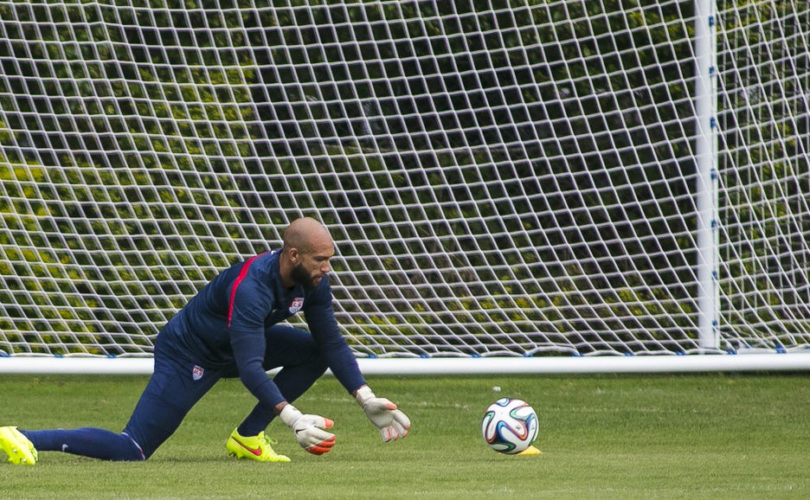 Moments after Brazilian defender David Luiz scored what turned out to be the winning goal versus Colombia in the World Cup quarterfinals, my friend looked up his bio on Wikipedia. He knew that Luiz, like several of his teammates, was a Christian who often speaks about his faith.

And sure enough, Luiz’s Wikipedia photo showed him wearing a t-shirt reading “Deus é fiel”: or, “God is faithful.”

Well, apparently the sight of David Luiz on his knees praying was too much for one Wikipedia user, who had edited the Brazilian’s page to add the following comment: “He is another one of those people with limited intelligence who do not know that 'god' does not exist.”

Well, I’m happy to say the disparaging remark was quickly removed. And I’m sure Luiz has learned to ignore such attacks on his faith—much like former Denver Broncos quarterback Tim Tebow.

Now, for all us Americans who normally don’t follow soccer, it may come as a surprise to learn that Luiz isn’t the only committed Christian shining brightly on the biggest stage in the world. Perhaps the most extraordinary story of faith has its origins not in Sao Paolo but in North Brunswick, New Jersey.

That’s the hometown of the American team's goalkeeper Tim Howard. On July 1, 22 million Americans watched Howard put on a goalkeeping clinic in the USA’s 2-1 loss to Belgium.

Howard set a World Cup record with sixteen saves and cemented his place among the world’s top goalkeepers.

It’s a status that no one  would have predicted when he was in the sixth grade. That’s when Howard was diagnosed with Tourette syndrome, a neuropsychiatric disorder characterized by physical and vocal tics.

As you can imagine, the condition is isolating due to the stigma and the low self-esteem that goes with it.

All of which make Howard’s success even more remarkable. If there’s one thing a world-class goalkeeper has to have, it’s confidence.

And where does Howard get his confidence? His Christian faith. In a piece for Athletes in Action, Howard wrote that he didn't experience much peace while growing up.

The one exception was in the presence of his grandmother, whose peace and strength came from “her faith in the Lord.” He recorded that “through her, God revealed His love for me as well. It wasn't long before I was following in her footsteps. I wanted the same kind of faith and peace she had, and that is exactly what God gave me.”

His use of that platform isn’t limited to helping Tourette sufferers. He has reached the pinnacle of his profession by playing in England’s Premier League. In fact, a year after joining legendary Manchester United, Howard was named “Goalkeeper of the Year.”

And this is in a country where relatively few people attend church. What the locals call “football” is a religion there, and players are, whether they want to admit it or not, role models. And Howard, a Christian at the top of his game, has used the opportunity to witness to his faith.

Once the World Cup is over, most of us Americans will go back to ignoring what many countries call “the beautiful game.”

But the rest of the world will still be watching, which is why I’m thankful for the faithful witness of men like David Luiz and Tim Howard.