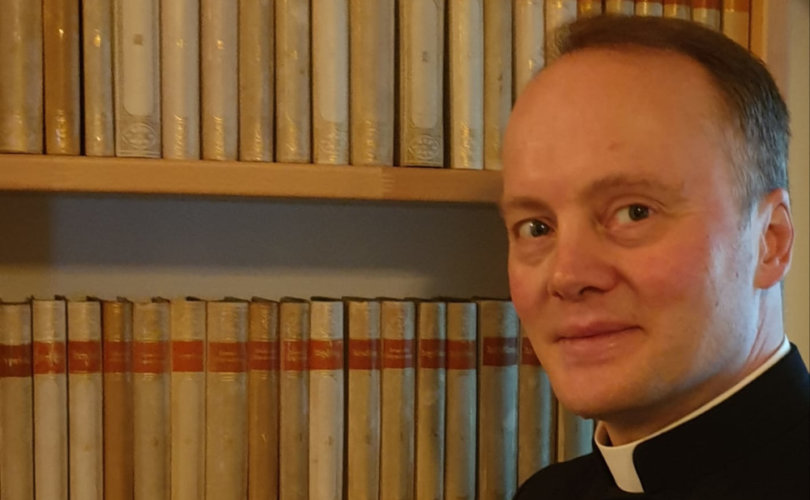 December 10, 2020 (LifeSiteNews) — There is a prophecy of St. Francis of Assisi in an authentic and renowned source, in which he speaks of the appearance of an apostatic antipope in the time of tribulation (“futurae tribulationis”).[1]

It says “that someone who is not canonically elected and is infected with heretical wickedness, at the turning point of that tribulation raised to the papacy, would make a refined effort to give many the death of his error to drink” (“quod aliquis, non canonice electus et haeretica pravitate infectus, in articulo tribulationis illius ad papatum assumptus, multis mortem sui erroris sagaciter propinare moliretur”).[2] St. Francis of Assisi predicted that this figure “tyrannically usurps the papacy” (“papatum usurpare tyrannice”).[3]

It is in this sense that in our time St. Padre Pio has entrusted to his spiritual son, the famous exorcist Don Gabriele Amorth, the following dramatic words: “It is satan who has entered the womb of the Church, and within a short while, he will rule over a false church.”[4]

St. Padre Pio knew the Third Secret of Fatima — it had actually been revealed to him four years before the little shepherds.[5]

The well-known Spanish journalist José María Zavala asked Don Gabriele Amorth about it in more detail, and summarized the conclusion of the dialog as follows: “There were two recurring and interrelated themes: the great apostasy in the Church from its apex — in accordance with the testimony of Cardinal Ciappi — and the introduction of the devil to the head of the Church by means of a pope under the control of satan.”[6]

In this context, Zavala referred to the exact correspondence of these words to the statement of Frère Michel, a great expert on the message of Fatima and author of a trilogy on the subject. He stated: “It will be the time of the decisive battle between the Virgin and the devil. A flood of diabolical confusion will spread throughout the world. Satan will penetrate the highest levels of the Church. This will be the great apostasy announced for the last days, […] the ‘false prophet’ who betrays the Church in favor of the ‘beast,’ according to the prophecy of the Apocalypse.”[7]

In fact, as Sr. Lucia herself pointed out[8], the secret is revealed in the last book of Holy Scripture.

In that book, there is talk of the fiery red dragon (cf. Apoc 12:3), which is manifest in atheistic communism, and of the black beast (cf. Apoc 13:1-2), which represents freemasonry.

Then it says: “Another beast came up out of the earth. It had two horns like a lamb, but it spoke like a dragon. It exercised all the power of the first beast before its eyes. It made the earth and its inhabitants worship the first beast” (Apoc 13:11-12).

The beast, which looks like a lamb, represents the ecclesiastical freemasonry that has penetrated into the interior of the temple — especially into the hierarchy. Its goal is to overcome the Catholic Church from within. It wants and achieves for a short time the creation of an idol — a false christ and a false church.[9]

The reference to the hierarchy of the Church is crucial, in which the mitre — with two horns — indicates the fullness of the priesthood. The beast that comes up out of the earth looks like a servant of Christ, the Lamb, but is a servant of satan, the dragon.

Thus, if the second beast is ecclesiastical freemasonry, it is personified and literally elevated to the summit in the false prophet at its head[10], who is expressly designated as such in three passages of the Apocalypse (Apoc 16:13; 19:20; 20:10).

He is the pseudo-religious leader of the anti-church. Through grave heresies and despicable sacrileges he advances the great apostasy from the top. He deceives and cheats the inhabitants of the earth (cf. Apoc 13:14) and wants to lead people to worship the antichrist, whose direct forerunner he is (cf. Apoc 13:12).

The former Bishop of Fulda, the exegete of the New Testament Prof. Dr. Eduard Schick, has also pointed out this dimension in his work on the Apocalypse: “The second beast’s mission is the unlimited seizure of power by the first; for this purpose it is ordered and equipped by the first; it is to lead people to recognize the first as what it claims to be, namely God himself. All his propaganda aims at this in words and deeds […] It is a matter of religiously transfiguring the world power of the antichrist and getting mankind to pay him cultic veneration in turn.”

Bishop Schick accordingly speaks of a satanic trinity. It consists of the dragon and the two beasts.

“The rulers of the world, who had placed themselves in the service of the ‘satanic trinity,’ believe that the favorable opportunity has come to lead together the final destructive strike against the Church of Christ on earth. The satanic triad doubles its propaganda for this purpose.”[13]

Archbishop Fulton J. Sheen made it clear in this context that this agenda is marked by the establishment of a counter-church: “It will have all the notes and characteristics of the Church, but in reverse and emptied of its divine content. There will be a mystical body of the antichrist, which will resemble in all its externals the Mystical Body of Christ.”[14] Accordingly, an anti-church at its head necessarily needs an anti-pope, who is the false prophet of the Apocalypse.

The hostile aspiration wants to seduce people to “accept a new religion without the cross, a liturgy without the hereafter, a religion to destroy religion, or a politics that is a religion.”[15]

Blessed Anna Katharina Emmerich, the great German mystic, has seen and described the rise of the pernicious anti-church. She “saw how […] another dark church arose in Rome.”[16] In doing so, she used a drastic term that clearly demonstrates the apocalyptic extent of the event: “But the whole house was dark and black, and all that happened in it was darkness and gloom […] I also saw how very bad the consequences of this after-church would be. I saw it grow, I saw many heretics of all ranks go to the city.”[17]

Blessed Anna Katharina Emmerich saw the closure of the churches and the great distress of the Catholic communities everywhere.[18] She described the spread of the “dark after-church” as an implementation of the antichristian decisive struggle: “The sect receives its signature from the apocalyptic beast which, risen from the sea, dwells with it and drives it to fight against the flock of Christ.”[19]

Against the background of this apocalyptic period, the famous message of La Salette echoes like a loud and insistent warning: “Rome will lose faith and become the seat of the antichrist”[20].