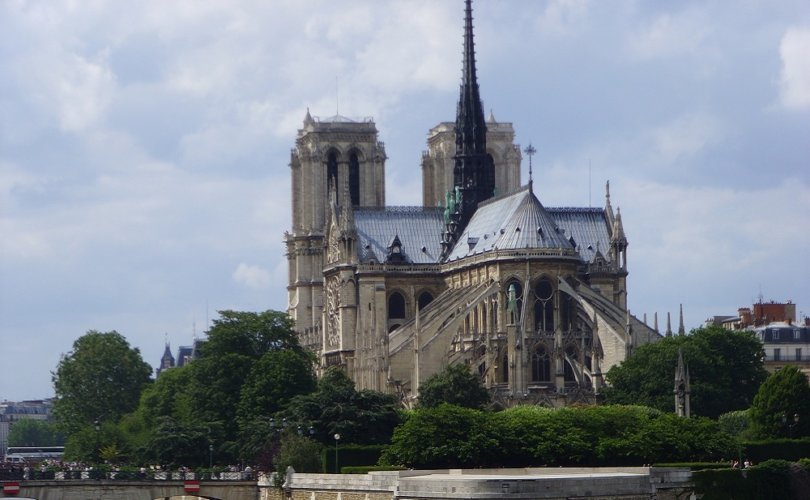 April 18, 2019 (kath.net) — On the first day of Holy Week, Notre Dame was burning in Paris. Could there be any symbol with a louder cry of “change your ways!”? Christianity has been struck in the heart! Everyone feels it — including those who are not Catholic or even believers. Where are we to go with the needs of the world, with our own hardships, when we no longer have churches, when Christianity has been devastated and survives only at the margins or underground?

The Western world has fallen away from faith. More and more churches are closed, and more and more fall victim to vandalism — more than 1,000 in France in 2018. Humanity has become indifferent toward God, and the powerful are doing everything they can to obliterate belief from the hearts of people, to destroy Christian culture, and to deprive Christians of any possibility to influence society.

It was not only the first day of Holy Week, but also the eve of Saint Bernadette Soubirous’s and Pope Benedict XVI’s birthdays. A few hours after his retirement announcement on February 11, 2013, a bolt of lightning tore from the sky and struck the top of St. Peter’s Basilica — a sign that has come true in a shocking way. On April 11, 2019, the pope emeritus again spoke out as a shepherd who does not abandon his flock and gives them light and direction, so they will not despair of the Church:

A society in which God is absent — a society that does not know Him and treats Him as nonexistent — is a society that loses its sense of proportion. In our times, the catchphrase of ‚God is dead’ was coined. They assure us that when God dies in a society, it becomes free. In truth, the death of God in a society also means the end of its freedom, because with Him dies the meaning that provides direction. And because the compass disappears that shows us the way by teaching us to distinguish good from evil.

That is why Notre Dame burned. The cathedral’s basic structures are still standing. The church structures in Europe are still standing, but they are no longer filled with believers who kneel before the Eucharist, who ask God’s merciful forgiveness in confession, who still know what they believe and still admit to their faith, who walk the narrow path to holiness. How much do they wish to have an example in their shepherds! But so often the flock is left alone, no longer taught to recognize wolves in sheep’s clothing so as not to be trapped by them. Shepherds, where are you? Why such fear? Why do you not show us how to follow Jesus? Why do you deliver the flock to the wolves?

The Crown of Thorns was rescued from the flames of Notre Dame. Turning to God means consent to sacrifice and suffering. But sacrifice and suffering are the stones with which Notre Dame will be rebuilt. St. Francis of Assisi received the instruction from Jesus: “Rebuild my church.” He took it literally and began rescuing San Damiano from decay. But he did much more: through his sacred life, he renewed the entire Church.

Emmanuel Macron assures us that Notre Dame will be rebuilt. A French family will donate 100 million euros for it. Great! But the true reconstruction will occur through conversion to the fullness of faith. Whatever their situation, everyone can contribute to rebuilding Notre Dame by living the word of God.

We are in Holy Week. Jesus says, “And if those days had not been shortened, no human being would be saved; but for the sake of the elect those days will be shortened” (Mt. 24:22). We will not be spared the tragedy of Good Friday. But we know and believe and have experienced in our own lives that the Resurrection comes after the crucifixion.

The Lord is truly risen! Let our hearts be filled with the joy of our Lord’s resurrection this coming Easter Sunday, so that we may have the strength to stand firm at the foot of the cross.

Notre Dame, our Lady, our beloved Lady, mother of our Lord Jesus Christ, pray for us.

Published with  permission from the author. The original can be found in German at kath.net. Translated by James Patrick Kirchner.