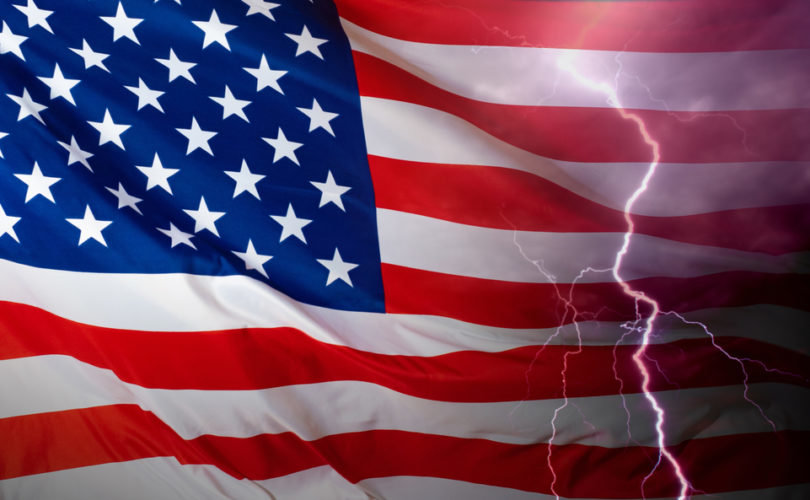 June 1, 2021 (American Thinker) – Sweeping social transformations occur during times of crisis.  We are in such a predicament now, and transformative change may be coming to America whether we want it or not.  It could define who we are as a nation for the remainder of the 21st Century.  Whether America reaffirms itself as a beacon for freedom for the world or whether we become just another plot of ground in the new world order remains to be seen.  The consequences for all Americans could be enormous, and especially so for Millennials.

What crisis are we in, you ask? Well, consider the staggering debt and economic collapse that is looming.  Confrontation and possible war with China is looming as well.  The pandemic has and is still wreaking havoc on our way of life.  Big Tech and Big Media are restricting free speech and fixing elections with the compliance of the administrative state in Washington.  The border is being overrun.  Schools no longer teach our history or what it is to be an American.  At the head of it all is Joe Biden and his merry band of race-baiting socialists purposely driving this runaway train off the tracks.  And in the end, societal collapse and a “Great Reset” into a Marxist world government await our demise.

So yes, we are in a crisis where the future of our way of life hangs in the balance.

In their seminal 1997 book, The Fourth Turning: An American Prophecy, William Strauss and Neil Howe surveyed history through a generational prism.  Their chronicle forms Anglo-American history into seven recurring sequences over the past 500 years.  The authors make a weighty claim that generational characteristics follow a similar series of generational phases, or turnings, that climax in a major crisis every 80 years or so.

The last historical crisis we faced was the Depression and World War II, where The Greatest Generation was forged.  These trials brought about significant changes to the entire world, and especially to the Greatest Generation.  We are now 80 years past that crisis, and it now appears the nation has entered into another time of tribulation.

Our nation has experienced existential upheaval during the American Revolution, the Civil War, and the Great Depression and World War II together.  Since the Fifteenth Century, western civilization has repeated the pattern of four turnings seven times.  Hence, the title of a new book, The Seventh Crisis – Why Millennials Must Re-Establish Ordered Liberty, by Bob MacGuffie and Antony Stark.  Their book updates and refreshes The Fourth Turning narrative to the crisis we face today.

While the turmoil we face will affect all ages, it will fundamentally impact young people.  Like the Greatest Generation, this new crisis will have a defining effect on Millennials and significantly impact the destiny of the United States.  But are Millennials up to the task ahead?

According to the U.S. Census, Millennials have become the largest living generation in 2019.  By 2050, the Pew Research Center projects about 25 million more Millennials than any preceding generation.

Millennials' notable aspects are that they are more racially diverse, more sensitive to racial discrimination, and more likely to back Democrats. Unlike the Greatest Generation in their youth a century ago, a large percentage of Millennials come from broken homes.  On the whole, they have not been raised to rely on the stable influences of family, community, and the church.

According to Pew, they are 43 percent non-white and stand out for their liberal views.  In a 2018 survey, 52 percent of millennials said racism was the main reason black people could not get ahead, while 79 percent believed immigration strengthened the country.

The word “equality” has become almost sacred to Millennials.  They want a level playing field.  They want everyone treated fairly.  And they want to leave behind our discriminatory, racist past.  All that is positive, but to spearhead a conservative renaissance in the Seventh Crisis, Millennials will need an epiphany regarding all the anti-Americanism they have been fed by popular culture since childhood.  While this prospect may be somewhat unlikely, an existential crisis to one's way of life has a way of making stark back-to-basic awakenings happen.  We will see.

All generations must come to realize that while leftist groups pretend to stand for tolerance and egalitarian Socialism, they represent repression of free thought and a form of brute nihilistic fascism not seen since the 1930s in Europe.

Indeed, young and old will be in this fight.  Those fighting the Seventh Crisis can find ways to fight against the deep state by emulating the example of the Tea Party movement a decade ago, which demonstrated how to organize a campaign based on organic power.  It is now called the MAGA movement, and it is difficult for the deep state to control because deplorables embrace hatred by the deep state as a badge of honor.

At some point, the left will ramp up some incident, triggering a full-on conflagration of street riots, accusations of racism, political correctness, and critical race theory designed to undermine and bring down all that is considered the foundation of American life.

According to MacGuffie and Stark, only the Ordered Liberty of the Constitutional process that limits government power can prevent systematic oppression by the self-appointed elite to permanently maintain control by exempting themselves from what they seek to enforce on everyone else.

Young people should not kid themselves.  They are the main target to be sabotaged, and they need to understand the attack on traditional culture is an attack on both them and their future.  It is designed to destroy Ordered Liberty by convincing them that they should neither want nor need items such as freedom, capitalism, traditional family values, and Judeo-Christian morality.

The Seventh Crisis has arrived whether we are ready to face it or not.  This crisis will probably resolve the ideological struggle that has been waged in this country since the 1960s.  The multiple attempts at compromise over the years have all failed.  This time the reality will be one side will win, and the other side will lose.

Courage is contagious, and great courage by all will be needed in this critical time.  Once a few heroic individuals make a stand, we can only hope a rising tide of patriots will follow their lead to save the country.  The only question is, will all generations – and especially Millennials – be able to overcome the peril that confronts us, or will we fail?  We need to gird ourselves to triumph in the battle ahead.