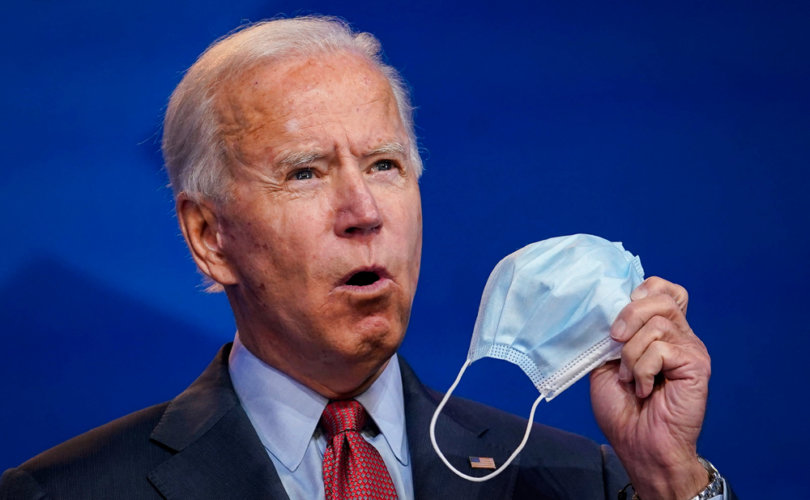 (American Institute for Economic Research) – Since the start of the COVID-19 pandemic, lockdown champions have perennially invoked “science and data” to sanctify any mandate politicians impose. Hard facts have recently shown that neither vaccines nor face masks provide surefire protection against the virus. But no amount of evidence has yet shaken faith in the magic of absolute power.

COVID policies are increasingly degenerating to the equivalent of sacrificing virgins to appease angry viral gods. New Zealand on August 24 imposed a nationwide lockdown in response to a single COVID case in the capital city. Prime Minister Jacinda Ardern ordered her captive citizenry: “Do not congregate, don’t talk to your neighbors. Please keep to your bubble.” Arden asserted that “complying with these rules, making sure we do all we can to stamp it out, still remains the best strategy in the world right now.” Ardern did not deign to explain why almost no place else in the world, including places with vastly more COVID cases, sought to outlaw everyday conversations.

In Australia, the military is patrolling city streets to enforce the latest lockdown. Daniel Andrews, the Premier of the state of Victoria, recently decreed: “There will be no removal of masks to consume alcohol outdoors.” One Aussie lamented, “My business has been forcibly closed. Everyone has been sent home without pay. We are banned from leaving our homes except for the 5 reasons given by the Government.”

There is no “science” to justify prohibiting Australians from going more than 2 miles from their home. But New Zealand and Australia presume that no one will be safe unless government officials have jurisdiction over every breath that citizens take.

In the United States, many of the same pundits and activists who howled about the evils of “microaggressions” are now cheering for the government to forcibly inject everyone with a COVID vaccine. Biden publicly declared that he is checking to see if he has the power to force everyone to get injected.

Biden endorsed the vaccination passports that some cities have already imposed. Radio host Grant Stinchfield commented, in Los Angeles “you can [defecate] on the street, shoot drugs in crack tent on the sidewalk and even steal anything less then (sic) 900 bucks but now you have to show papers to get in a restaurant or gym!?!?” New York City’s passport regime effectively bans the majority of blacks from many activities of daily life, since they have a much lower vaccination rate than other groups.

Far greater restrictions may be on the horizon. The Associated Press reported that the Biden administration is considering “mandating vaccines for interstate travel” but is delaying any such decree until “Americans were ready for the strong-arming from the federal government.” A top former Homeland Security official has called for placing anyone who is not fully vaccinated on the No Fly list, thereby expanding the list to scores of millions of people and creating new havoc for air travel. Biden administration officials have offered no evidence that such restrictions would end the pandemic but it would permit the president to demonstrate the same machismo that President Nixon showed with his illegal invasion of Cambodia in 1970.

Politicians’ anti-COVID recommendations increasingly resemble frightened soldiers shooting at any noise they hear in the dark. NIH Director Francis Collins recently condemned the “epidemic of misinformation, disinformation, distrust that is tearing us apart.” But much of the misinformation has stemmed directly from the Biden administration’s flip-flops and fearmongering. On August 3, Collins announced during a CNN interview that “parents of unvaccinated kids should… wear masks” in their own homes. He conceded: “I know that’s uncomfortable, I know it seems weird, but it is the best way to protect your kids.” A few hours later, Collins recanted on Twitter, perhaps after other political appointees persuaded him to stop sounding like a blithering idiot.

— Article continues below Petition —
PETITION: Ban COVID vaccine mandates for schools and universities!
Show Petition Text
42207 have signed the petition.
Let's get to 45000!
Thank you for signing this petition!
Add your signature:
Show Petition Text

COVID misinformation started at the top. In a CNN Town Hall last month, Biden declared, “You’re not going to get COVID if you have these vaccinations.” Biden administration officials kept reciting the “pandemic of the unvaccinated” refrain long after it became clear that vaccines were rapidly failing to prevent the spread of COVID. On August 8, CDC Director Rochelle Walensky finally admitted: “What [COVID vaccines] can’t do any more is prevent transmission.” Helluva asterisk. Prior to that, the Biden administration even refused to disclose the number of “breakthrough” infections that had occurred among White House staff. Prof. Eric Topol complained that the CDC’s false statements on COVID risks was a “blatant failure putting millions of vaccinated Americans at unnecessary risk for breakthrough infections.”

On Thursday, a front page Washington Post article castigated the CDC for withholding COVID information from the public, noting that its “overly rosy assessments of the vaccines’ effectiveness against delta may have lulled Americans into a false sense of security.” Tom Frieden, former CDC director under Obama, suggested that the long delays in disclosure led some people to “wonder if the CDC is hiding results.” CDC Director Walensky responded to the debacle by promising “to develop a new forecasting and outbreak analytics center to analyze data in real time,” the Post reported. The CDC apparently did not previously consider it worthwhile to spend any of its $8 billion annual budget on such a project.

The Biden administration has sought to blame the resurgence of COVID on scofflaws who did not submit to every revised command. The Official Enemies List has expanded from those not wearing a mask to those resisting getting vaccinated, and it will soon include those who balk at getting a third (and fourth? fifth?) injection.

The biggest expansion of the Enemies List occurred on August 13, when the Department of Homeland Security issued a terrorist alert, warning law enforcement agencies that “anti-government/anti-authority violent extremists could exploit… potential re-establishment of public health restrictions across the United States as a rationale to conduct attacks.” Anyone who loudly objects to being locked back under house arrest will be the moral equivalent of the Taliban, or maybe Hezbollah. Previous federal driftnets for potential troublemakers expanded far beyond individuals who threatened violence. The feds may already be compiling vast lists of COVID critics that could come in handy at some future point.

But at least government officials now recognize the real enemy. COVID Czar Tony Fauci recently declared, “I know people must like to have their individual freedom… but I think that we’re in such a serious situation now, that… mandates should be done.” Fauci predicts that once the FDA rushes its formal approval of the COVID vaccines, there will be far more mandates imposed on Americans. The fact that the efficacy of the Pfizer vaccine has fallen to 42% is irrelevant. A vaccine isn’t a failure as long as the government can force everyone to get additional injections.

The primary “evidence” for most COVID policies is the job title of the government official issuing the decree. As University of California San Francisco professor of medicine Vinay Prasad wrote last month, “When it comes to non-pharmacologic interventions such as mandatory business closures, mask mandates, and countless other interventions, the shocking conclusion of the last 18 months is this: We have learned next to nothing.”

Prasad slammed his colleagues for failing to do reliable research on key issues of the pandemic: “Anyone who considers themselves a scientist should be embarrassed by our collective failure to generate knowledge, and this failure is once again looming large.”

For bureaucrats and politicians, gaining power and compelling submission are victory enough, even when their policies fail to vanquish a virus. Citizens are obliged to assume “government knows best, even when it knows little or nothing.” People won’t get infected as long as they are groveling to federal commands, right? Unfortunately, the government has no liability for the injections it approves or the freedoms it destroys.

Faith in absolute power is not “science” – regardless of how many scientists pledge allegiance to Washington in return for federal funding. As historian John M. Barry, author of The Great Influenza, observed, “When you mix politics and science, you get politics.” There is no safety in submission to damn fools, regardless of their pompous titles.

Reprinted with permission from the American Institute for Economic Research