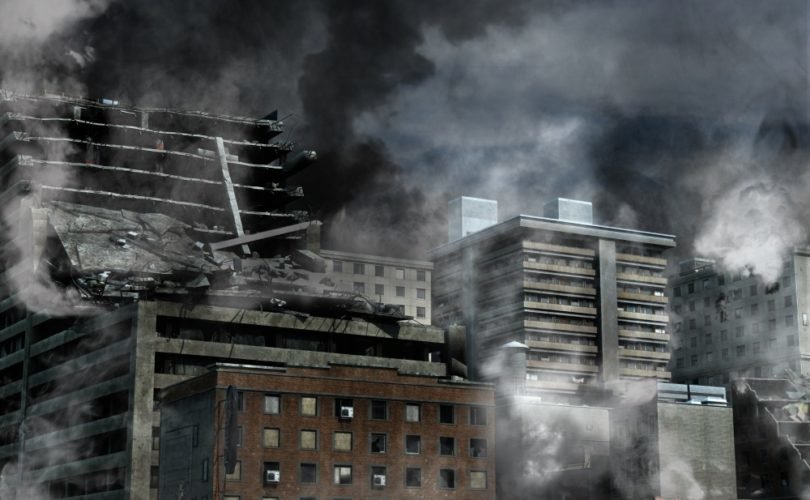 (The Dossier) —The war on a virus is long lost, and the sunk costs keep piling up.

Whether you believe that this was all to bring about a Great Reset or some of the actors involved genuinely wanted to stop a virus, the result is now clear. The war on COVID-19 is over and it has resulted in colossal loss. Not a single battle was won. They lost the war, they know they lost the war, and now the losing side of the war — the global “elite” — is attempting to cover up this reality by any means necessary, even if it means dragging the entirety of humanity down with them.

Movement Passes for 5-year-olds in New York City and San Francisco. Prison for the non-compliant in Austria and Germany. Detention centers for troublesome citizens in Australia and New Zealand. What do all of these places have in common? First and foremost, as The Dossier readers know well by now, none of these measures are backed by any legitimate scientific precedent. The global “elite” forcibly drafted billions of people into fighting a “war on a virus,” and that war has been an abysmal failure. Now, almost two years into this war, the ruling class won’t give it up. Far from surrendering this unwinnable war, the “generals” of this struggle have decided to attempt to bring us down with them into colossal defeat.

Austria: Unvaccinated will be formally asked to get vaccinated starting February 15; those who fail to comply one month later will face penalties,draft law.

The people, organizations, and governments in charge of fighting our “war on a virus” have lost in devastating fashion. Far from a successful global effort to stop a virus, these ruling factions and power centers have failed the billions of people drafted into this war without the consent of the governed. From Los Angeles to Sydney to Moscow to Rio to New York to Paris to London and everywhere in between, almost every government on every level across the world, with very few exceptions, committed incredible harm against their populations in the name of stopping a virus. And they have absolutely nothing to show for it.

US Surgeon General: “Get vaccinated and boosted. You use testing judiciously before you gather, you gather in well-ventilated spaces and use masks…your risk can be quite low and your holidays can be quite fulfilling.”

They threw every “public health expert” class instrument in the book at the COVID-19 pandemic, and nothing worked. But the people in charge don’t want to be blamed for the chaos they wrought. That’s bad politics, and not an ideal situation for those who believe that they are the personification of science itself. So instead of admitting to gross, criminally negligent and now purposeful failure, these maniacal saboteurs are doubling, tripling, and quadrupling down on sunk costs for the masses. The “elites” know nothing is working, but they’d rather take everyone down with them than to admit to wholesale failure.

The mayor of New York announced today that 5 year olds will be forced to show proof of vaccination to eat at a restaurant, because vaccine passports work

The masks failed. The lockdowns failed. Every single overhaul of society to accommodate the Safety Regime failed. And now it’s becoming pretty clear that the Big Pharma mRNA injection regime failed, too. The people did not fail the ruling class. Whether we like it or not, the people complied en masse. According to so many metrics, compliance with these pseudoscientific measures was off the charts. Almost everyone wore the masks. Almost everyone stayed in their homes to “stop the spread.” An estimated 8+ billion COVID shot doses have been administered. Citizens across the world placed overwhelming, virtual blind trust in these governments to protect them from a virus.

With 99.6% of adults partially vaccinated and 92.2% fully vaccinated, vaccine passports & additional restrictions, cases in Portugal are higher than they’ve been since early February

The commitment of politicians to pointless & destructive interventions is absolutely astonishing pic.twitter.com/4Jg3E02GhB

Humanity is left with a tremendous sunk cost, with the ruling class having drafted billions into this mess, resulting in hundreds of millions of lost lives and livelihoods. Anthony Fauci, Bill Gates, Joe Biden, Xi Jinping, Boris Johnson, Angela Merkel, the World Health Organization, the World Economic Forum, The New York Times, The Chinese Communist Party, Pfizer, Moderna, Facebook, Google, Twitter, the CDC, the FDA and the list goes on. These people, governments, and organizations should be defined by this era and the suicidal “war on a virus” that they forced upon the world. And everyone should always remember the incredible human suffering spawned by these actors.