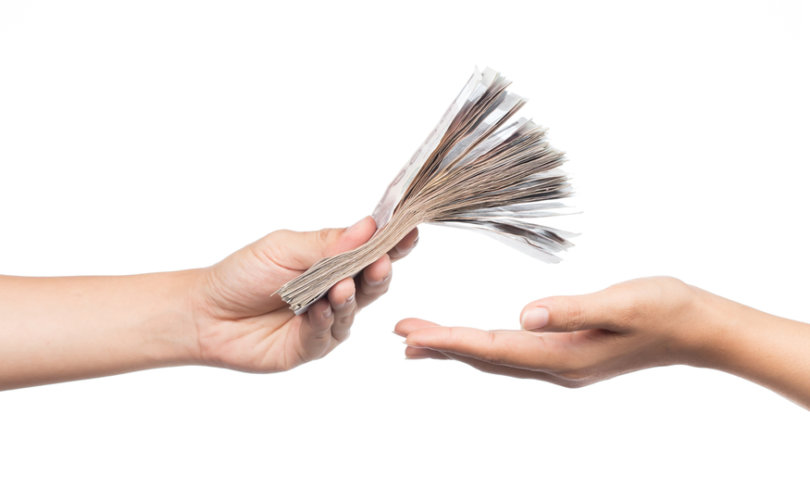 May 1, 2017 (Catholic Insight) — They are rolling out guaranteed income in three test communities in Ontario (Hamilton, Lindsay and Thunder Bay), along with a few jurisdictions in the United States and Europe. For those who have remained nescient of this magical money phenomenon, the premise is quite simple:  The government provides every household in the region, regardless of income, whether rich or poor, a certain amount of money every month, with which you can do what you will.

This may sound too good to be true, for money grows neither on trees, nor in governmental coffers. At the very least, like most fantastical schemes, it is too good to be a good idea.  The thinking goes that with so many people receiving benefits from the government anyway, employment insurance (which used to be called unemployment insurance, but that sounded pejorative, I suppose), welfare, and all kinds of other emoluments from federal, provincial and municipal bureaucracies, mediated by all kinds of bureaucrats, who had to be paid well to figure out how much and to whom, the government has decided just to cut to the chase, and provide everyone with enough cash to keep them sort of afloat, whether they work or not.

As I quoted Emperor Nero recently, his policy was to give the people panem et circenses, bread and circuses: fill their bellies with cheap food and their minds with cheap entertainment, which will mutually reinforce each other in keeping them all compliant, even if that has the, perhaps unintended, effect of also producing a whole generation that is indolent, feral, unfulfilled and miserable.

According to reports, individuals will receive an ‘income’ of $1320 per month, so a couple could in theory make a decent ‘wage’, generously supplemented if they also have children by the rather generous ‘baby bonus’, or child benefit scheme.  I say ‘generously’ advisedly, since there is no pain on the bureaucrats’ part in giving away such largess.  As the great Maggie Thatcher quipped, ‘the problem with socialism is that you eventually run out of other people’s money’. The children can have two full-time parents at home, who need never again step outside the door, except maybe to buy groceries, and spend some of the largesse on a trip to McDonalds.

To return to the question of where this money will come from is of course a pertinent one.  Those who live within the confining restraints of a ‘government’ income, from what I can tell, rarely ponder this question deeply. I suppose they have a vague idea that they can increase their garnishing of the wages of those who do actually work for a living, the ‘working men’ to whom Pope Leo XIII refers in Rerum Novarum, by ‘whose labour states grow rich’.  By that he means all those who manufacture good and products, real wealth, which can traded on the open market.

Even so, we are well past the point that ‘working men’ can pay for all the boondoggles cooked up in the minds of benign, or not so benign, bureaucrats. Our metastasising government has been spending far and away beyond its means since mid-century, but Trudeau Senior, a socialist at heart, put the financial pedal to the metal, with his benighted son following in his footsteps.  No governmental scheme is apparently too big or too expensive, from universal ‘free’ health care and education, from diapers to degree, all the way to imposed bilingualism, from coast to shining coast. Ah, utopian paradise, thy name is Canada…

Then reality hits, and the one thing the ‘guaranteed income’ is guaranteed to do is spiral the federal and provincial debt ever-more into regions unthinkable by any sane society.  There is no real hope of ever paying it off, as any honest person will admit, which is why they talk of the ‘deficit’ (a yearly, cyclical thing) rather than the ‘debt’ (here to stay and grow until judgement day).  Like most people mired in debt, they just hope to maintain the interest payments.  But even these, growing monthly by the law of exponents, will bankrupt you and umpteenth generations after you.

The debt is a serious issue, which may come calling one day sooner than we think.  But far more fundamental is what such a dependency on the government does to the human soul, the human person, and especially to the male half of the population.

Here is the rub: Societies are built up from families, not individuals, and, as John Paul II put it in Evangelium Vitae “A family policy must be the basis and driving force of all social policies”.  In case there is any confusion, a family is a ‘husband and wife, along with their children’, within which it is natural and nurturing for the mother to stay at home raising the little ones, and the father to provide for that home by that soon-to-be quaint notion of remunerative labour.

Of course, there will be exceptions to this norm, but this should be the paradigm which should shape, and has shaped, any healthy society, which wants to thrive and survive into future generations.

The worst aspect of the guaranteed income will be to sap the will, strength and vitality of the people. One might think, well, would not such a minimum income support families who are struggling?  Few would deny that families do need help and support, but this vast welfare scheme will make all of us effective wards of the State, replacing the role of the father and mother, basically owning us, telling us what we can and cannot do.  After all, without compliance, they can just turn off the money spigot, and what then?

We are already part-way there, with fewer and fewer families owning homes and private property.  Even those few that do are taxed and controlled by byzantine laws and regulations, from how they raise their children to what they can, and cannot, say and write.  If ‘private property’ means anything, it means a place where one is truly free, not just to live, but to support, maintain and perfect that property and all who live therein, by the work that one does.  A big part of that freedom is making a wage by one’s skills and talents, so that one sees the fruit of one’s labour.  Otherwise, there is no such thing as freedom, which remains an empty word.  For without the freedom to shape one’s life as one sees fit, using the gifts God has given us according to our conscience, there can be no perfection.  To be paid for doing nothing must seem rather debilitating even to a hard-boiled socialist.  We are all in rather proximate danger of being swaddled to death.

Of course, the whole Ponzi scheme may collapse under its own imponderable weight, but I still sort of hope that people will realize its unsustainability before it is too late. But looking around at the zombified stares of too many Canadians already far-too-swaddled, I am given more to despair.  For to use our freedom well, and protect that freedom, takes great work, and without incentive, that work will be all too easily be shirked. “By the sweat of thy brow…”

But that is a topic to which I will return soon.  In the meantime, refuse the minimum income, which will only minimize ourselves, and make us more slaves of Big Brother and Sister Trudeau and Wynne than we already are.

Reprinted with permission from Catholic Insight.