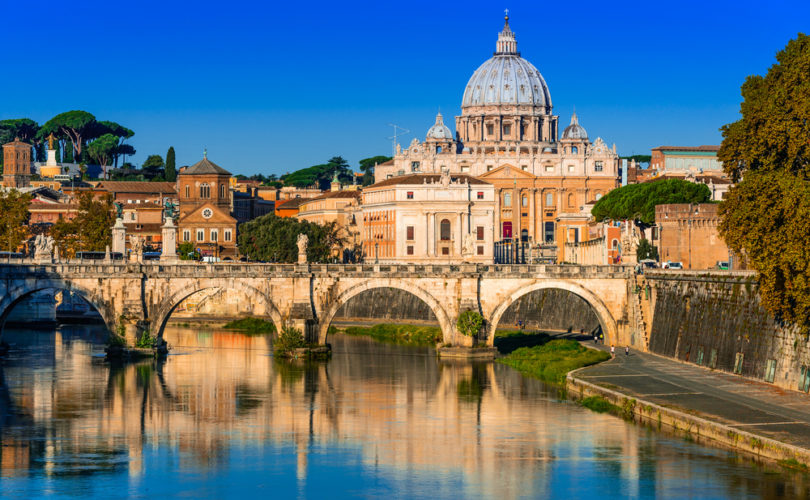 July 21, 2015 (LifeSiteNews) – An examination of the documents from the controversial May 25 “Shadow Council” in Rome, organized by the bishops of Germany, Switzerland, and France, shows a clear picture of the progressive agenda at the Vatican’s Synod on the Family. We present here, in exclusive translations from German, a close treatment of one presentation by a French laywoman, and some aspects and arguments from the others, in order to help prepare the Catholic world for the expectedly contentious Synod in October.

Professor Anne-Marie Pelletier of Paris, France, spoke at the gathering at the Gregorian University about the “Reception of Matthew 19:3-12,” which deals with the words of Jesus Christ concerning the fact that Moses had originally allowed divorce (for men) because of the “hardness of hearts.” In this context, Pelletier points out that the customs of our times have analogously changed, and, purportedly, in a very dramatic way. She speaks of the “peak of laicism and of secularization” and even, arcanely, of an “anthropological disruption”; and she adds: “The [standard of] life-long loyalty is now confronted with an ideal of a temporariness of loyalty.” Pelletier quotes some people who even

warn against the violence which would be done to those persons in the situations in which they live – if these spouses were to be put into a fixed and conclusive category as “adulterers”; and if there is also depreciative talk about those persons who still insist upon practicing and retaining their sin; and who are, therefore, exposed to a canonical order that disallows them to live out the sacramental rootedness of their identity.

Pelletier also insists that it would be somehow additionally defective “to interpret each [conjugal] separation as a sin.”

Just as Cardinal Walter Kasper has proposed, Pelletier also promotes the idea of asking the faithful for the assessment of this problem and to take seriously the sensus fidei, the sense of the faithful:

In any event, it would be dangerous to despise easily, much less to disqualify, a sensus fidei which opposes the idea that the power of the Cross comes to a limit, or meets an insurmountable obstacle, in such a wounded form of Christian life. The same sensus fidei is today given an inspiration that in Christ “love and truth meet each other” (see Ps 85:11), and in a mysterious “alchemy” which cannot be revealed to the Church by the Spirit.

Moreover, Pelletier calls for a strong “imagination” in dealing with “remarried” couples and for receptivity to a “richness of ideas.” She bemoans the putative fact that such people do not find forgiveness and are in an “impasse” – and are “expelled.” She thus wonders:

Should not the Church simply take the risk in accepting that spouses who have come into conflict with the canonical law claim their right to ask for forgiveness, even if they do not claim the right for forgiveness? In this way, the Church would act according to the justice which Christ teaches, beyond the temptation into which his interlocutors [the Pharisees] tried to lead him.

She also insists upon the “historical reference to the biblical texts.”

They [the Biblical texts] have been written in the language of a past time which has to be translated again and again into the present. They refer to life conditions which are simply not any more valid because of the social and cultural change.

Therefore, Pelletier proposes an “actualization” of the passages of the New Testament. With unmistakable obscurity, she stresses: “Exactly because the votum of Jesus – in favor of marriage and against divorce – is so clear, it is also open. […] This openness is not relativism, but the capacity to deal with the future.” Got that? The French professor also claims that the “teaching, morality, and law of the Church have to be constantly on the course of reform, since it is accountable for discovering anew, and under the markedly changing conditions, what marriage – in the sense of Jesus – means hic et nunc.”

With reference to the Pauline privilege – according to which a marriage can be invalid if both spouses were non-Christian at the time of the wedding, and if one of the two spouses later becomes a Catholic – Pelletier claims that there is “the possibility to dissolve an existing marriage […] which has been overlooked by the traditional exegesis – and to grant the permission to enter a new marriage.” She continues:

But according to the New Testament, God Himself can dissolve a marriage – if the bond of the faithful with Him which has been concluded in baptism cannot at all be saved otherwise. Consequently, the Church has to make use of her power to bind and to loosen, and to do so in more cases than in the past – for the sake of the Faith.

Pelletier claims that, otherwise, the Church would lose many of the faithful by their being disallowed to “remarry.” Pelletier now also criticizes traditional Catholic moral teaching, saying: “The Catholic moral teaching – up into the Catechism of the Catholic Church – has interpreted the 6th Commandment expansively, and in such a way that any sexual intercourse outside of a validly contracted marriage is judged as being licentious. But this is a rather rigid interpretation.” She indirectly claims that some spouses simply are not guilty, because they did not receive the grace to abstain from sexuality after a divorce (but did they ask for it?) when saying: “Whoever does not have the grace, cannot immediately be called an obstinate sinner with reference to the indissolubility of marriage.” She bemoans the situation that any sexual act outside of marriage is called by the Church already an adulterous act – instead of calling it adultery only when a new relationship is truly being started. Pelletier calls for finding peace with these irregular situations within the Church.

After having presented separately Professor Pelletier's statements made at the May 25, 2015 “Shadow Council” at the Gregorian University in Rome, we shall now present some of the main points and lines of argumentation of the rest of the speakers at the event, in order to prepare ourselves better for the upcoming Synod of Bishops on the Family. Because of the unexpected vastness of the material, I propose to list the primary arguments, after first mentioning the names of the speakers and their general topics.

Summarizing Report about the Discussion