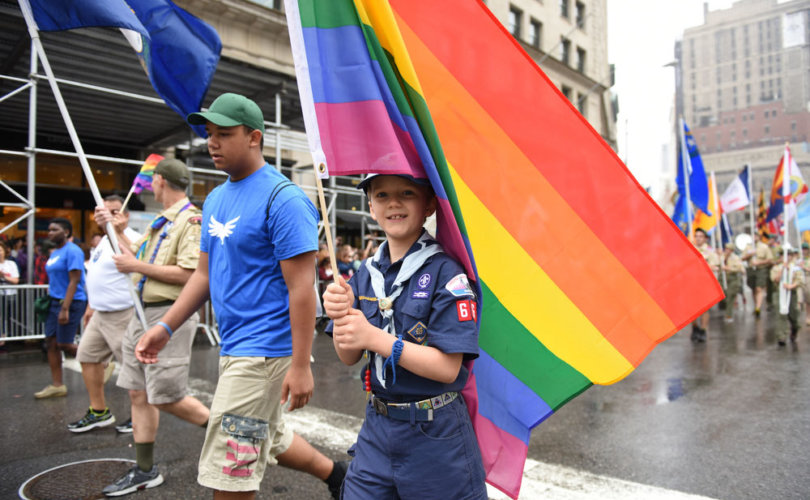 February 18, 2019 (Dads.org) — At least twenty-two Catholic dioceses and religious orders have filed, or announced an intended filing, for chapter 11 bankruptcy as a result of mounting sexual abuse claims.

The lawsuit payments to abuse victims have cost the Catholic Church in America almost $4,000,000,000. The loss in reputation and moral authority for the Catholic Church is inestimable. The Church is paying a steep price for the cover-ups of clergy sexual abuse and for failing to acknowledge a root cause of this abominable tragedy.

There has been lots of talk about protecting children, but where's the identification of what's primarily fueling the abuse — namely, the widespread network of active homosexual clergy? It's impossible to correct a problem until it's recognized and acknowledged. Just ask any recovering alcoholic who is participating in AA.

Many dioceses, like Miami, San Diego, and Chicago, have become acclimated to the network of homosexual clergy. By some reports, clerical sodomy in these places is regarded as something almost normal.

The fact that homosexual-friendly Cardinal Cupich of Chicago was appointed to be a key member of the planning committee for the upcoming Vatican meeting on preventing sex abuse is practically a guarantee that the homosexual network won't be rooted out by the summit.

Does the homosexual clerical network have anything to do with the Boy Scouts?

It's my contention that an accommodation (whether conscious or unconscious) to a homosexual network in dioceses, seminaries, and even in the Vatican leads to malformed judgments about similar decisions, like staying with the BSA.

Catholic leaders are divided on what steps, if any, should be taken after the BSA radically departed from the historic path of scouting.

In 2014 the BSA welcomed openly declared homosexual members. That's not a problem for many Catholic bishops. This is a dangerous decision in light of a study of Massachusetts teenagers that found that youth who identify as gay, lesbian, or bisexual were more than four times more likely (18% vs. 4%) to report sexual intercourse of some type before age 13. Is such a group of youth a safe environment for scouts on overnight trips, campouts, and Jamborees?

The BSA in 2015 began acceptance of openly-declared homosexual troop masters. Again, this is no problem for some Catholic leaders.

In 2017, the BSA announced it would allow biological girls who identify as boys to join scouting programs. Again, transgender scouts really isn't a deal-breaker for some.

The BSA changed its name to Scouts USA to reflect the new policy that girls are now welcome to join the formerly boy-only scouts.

What a tragic situation for what was one of the finest organizations in America. Even if your local troop has temporary protection from this disaster, do you really want to be a part of such an organization?

Thankfully, some bishops have concluded that it's time to leave the BSA. Bishop David Kagan of Bismarck, North Dakota, said:

I regret my decision, but, in conscience as the Chief Shepherd of the Diocese of Bismarck, I cannot permit our Catholic institutions to accept and participate directly or indirectly in any organization which has policies and methods which contradict the authoritative moral teachings of the Catholic Church.

We could use many more such courageous and truthful episcopal decisions.

While there are many great exceptions, Catholic leaders overall are doing a miserable job teaching about homosexuality. A July 2013 Barna national survey of America's change of mind regarding the moral acceptability of homosexual relations revealed an unparalleled crisis in the American Catholic Church. Between 2003 and 2013 the percentage of practicing Catholics who consider same-sex sexual relationships to be morally acceptable nearly doubled (from 19% to 37%). Barna mentions that Catholics have “far outpaced Protestants” in embracing the acceptability of homosexual activity. Evangelical Protestants' views remained basically unchanged during the same decade.

According to the Pew Research Center, twice as many younger Catholics support same-sex marriage as oppose it.

Along with the non-stop revelations of clerical sex abuse and episcopal cover-ups, most everyone with an Internet connection and who reads the news knows that the Catholic Church has a serious problem with active homosexual clergy. If this isn't bad enough, ask yourself, “What message is being sent, especially to youth, about Catholics continuing membership in the gay/transgender-friendly BSA?”

We've had more than enough cultural accommodation and acclimation. It's past time to begin embracing authentic scouting programs that develop boys into faithful Christian men.

Published with permission from Dads.org.