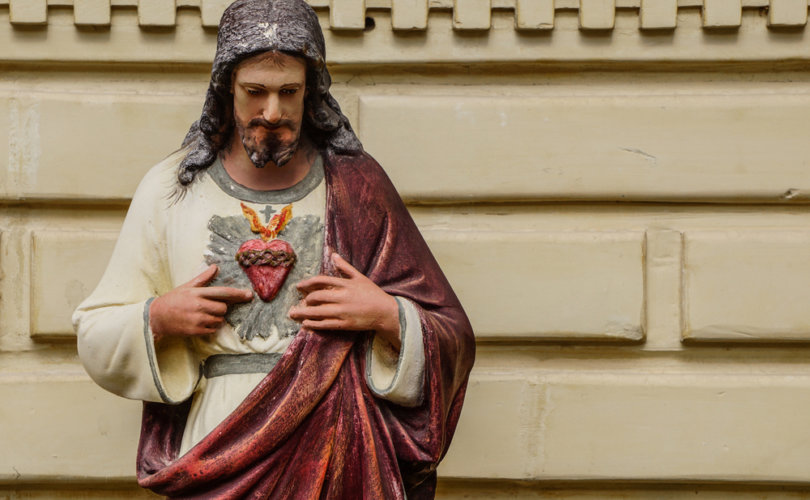 (Tradition, Family, and Property) – The month of June is marked by Holy Mother Church as being devoted to the Sacred Heart of Jesus.

This holy and beautiful month, however, is also used by the world to promote the ever-increasing influence of LGBT ideology, in direct opposition to that most pure love which stems from the Sacred Heart.

Devotion to the Sacred Heart

Evidence of the devotion to the Sacred Heart is found in the writings of the Fathers of the Church, such as the Adversus Haereses of Saint Irenaeus and the writings of Saints Justin Martyr and John Chrysostom.

However, Saint Margaret Mary Alacoque is the saint that we most associate with the devotion to the Sacred Heart. Starting in December of 1673, she received a number of visions of Christ who revealed the nature of the devotion and His wish to institute a feast honoring His most Sacred Heart.

After her death in 1690, the devotion grew in popularity until it was established as a feast in the whole of France in 1765. Finally, in 1873 the devotion was approved universally by Pius IX, and in 1899 Leo XIII beseeched the bishops of the Church everywhere to celebrate the feast in their dioceses.

Commenting on the reasons for this devotion, Pope Pius XII mentions that Christ’s Heart is the noblest part of human nature and is hypostatically united to the Person of the Word. Thus, we must pay due reverence to His Heart as we would the Son of God Himself. Moreover, the Pope mentions that “His Heart, more than all the other members of His body, is the natural sign and symbol of his boundless love for the human race.”

Just as with any man, the heart is considered the symbol of love for another; the Pope teaches that so also it is with Christ. Therefore, the chief sign of the love of Christ for His Father and man is His Sacred Heart.

With this beating heart, the symbol of the deepest and most perfect love, Christ loves His Father and wayward man. This boundless love cannot be contained or hidden. His most Sacred Heart is thus the symbol of this love, as Pius XII teaches. In reverencing this Heart, we reverence Christ and become more united to Him.

— Article continues below Petition —
Tell the Secretary of Defense: "Pride Month" is making our country weaker
Show Petition Text
10095 have signed the petition.
Let's get to 12500!
Thank you for signing this petition!
Add your signature:
Show Petition Text

Loving the Sacred Heart is based on humility

Indeed, this devotion is based upon humility. Through reverencing the Sacred Heart, we reverence the purest and most perfect act of true love – Christ’s death on the Cross – which was based not on selfishness or sensuality but selfless sacrifice. In loving the Sacred Heart, we love that “source of expiating blood which effaced the sins of the world,” writes Fr. Ewald Bierbaum in his Six Sermons on Devotion to the Sacred Heart.

The Church thus advocates devotion to this beating heart, which was pierced on the Cross and pours out His blessings upon us each day. In loving the Sacred Heart, the Church responds to the crucifixion in the most fitting manner possible by loving Him who loved us to the point of giving His life for us.

‘Pride’ month twists the devotion to the Sacred Heart

In direct opposition, our liberal establishment proposes that June be given over to the promotion of immoral perversions, as is advocated in the LGBT movement. Indeed, it is no coincidence its activists have hijacked June to celebrate their practices. As with all such satanic endeavors, the opposing vice is promoted in a vain attempt to defeat the virtues the Church proposes.

Hence, the LGBT movement aptly labels itself and its adopted month as “Pride,” in opposition to the humility and self-sacrificial love of the Sacred Heart, which the Church contemplates. Pride, the original cause of man’s downfall in the Garden of Eden, continues to be the vice by which postmodern man relentlessly promotes sin and death.

“Pride’s” radical ideology is built upon opposition to natural and spiritual life, a denial of natural reason and reality, and slavery to sin and death. “Pride” month is truly the satanic response to the Church’s devotion to the Sacred Heart. The “Pride” ideology opposes selflessness, purity, zeal for souls and conformity to the Divine Will of the Trinity.

Necessity of devotion to the Sacred Heart

The ineffable love given by the Sacred Heart completely satisfies our hearts. The empty, barren, and fatal “love” offered by the LGBT movement and its “Pride” month brings only frustration and death.

Instead of focusing on LGBT distortions of love, a devotion to the Sacred Heart allows us to turn to God as the proper end of all endeavors and our highest good. Devotion to the Sacred Heart and the Immaculate Heart of Mary can be the remedy for our postmodern society that hardens its heart by practicing every imaginable vice to the point of blaspheming God and killing the innocent unborn.

We desperately need devotion to the Sacred Heart if we are to have any hope of turning back to God.

Reprinted with permission from Tradition, Family, and Property