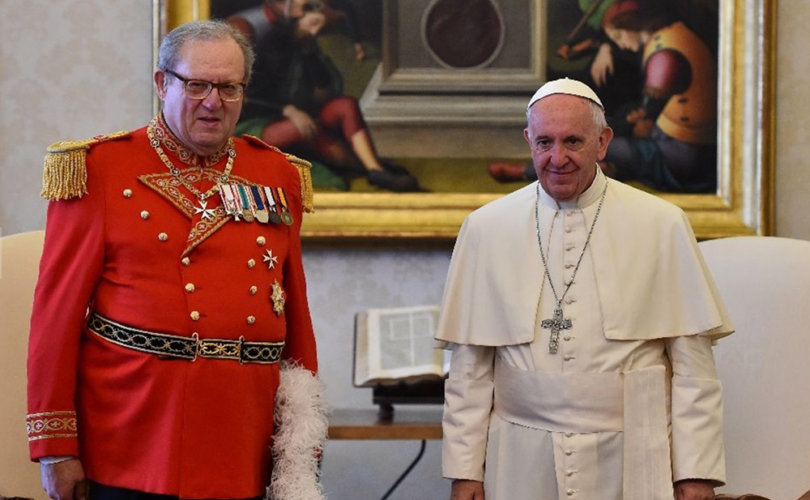 Former Grand Master of the Knights of Malta Matthew Festing with Pope Francis.

January 25, 2017 (CatholicCulture.org) – For most of us, who are not Knights of Malta, the resignation of the group’s grand master will have little immediate impact. But the unprecedented papal intervention into the affairs of that venerable body fits into a pattern that should, at this point, worry all faithful Catholics. Under Pope Francis, the Vatican is systematically silencing, eliminating, and replacing critics of the Pope’s views.

During the reigns of Popes John Paul II and Benedict XVI, “progressive” Catholics frequently complained about a crackdown on theological dissent. On the rare occasions when the Congregation for the Doctrine of the Faith issued a warning about a wayward theologian’s published works, there were anguished warnings about a reign of terror at the Vatican. Now a crackdown really is occurring—instigated by the Pontiff who famously asked, “Who am I to judge?” And the objects of the current crackdown are not theologians who question established doctrines, but Catholics who uphold the traditional teachings of the Church.

The first and most prominent victim of the purge was Cardinal Raymond Burke, who was exiled from the Roman Curia soon after Pope Francis took office, and given a mostly ceremonial post as patron of the Knights of Malta. It is ironic—and perhaps not coincidental—that the latest incident involves his new charge.

The Pope himself asked for the resignation of Fra’ Matthew Festing, after a disagreement that apparently began with the discovery that the Knights of Malta had been involved in a condom-distribution program. The Vatican jumped into the fray—on the side of the man who was responsible for that involvement. In asserting control over the situation, Pope Francis was not deterred by the argument that the Order of Malta is a sovereign body under international law. Indeed the Vatican announced that the Pontiff plans to appoint a papal delegate to lead the group. “Under international law, what we are seeing is effectively the annexation of one country by another,” remarks canon lawyer Ed Condon.

(Condon goes on to observe that if the Pope goes ahead with his plan, and the Knights of Malta accept his delegate, the precedent thus created will “lurk under the Secretariat of State’s dealings with other governments like an unexploded bomb.” The next time Italian banking authorities demand records of financial transactions at the Vatican bank, or an American attorney for sex-abuse victims seeks to subpoena the dossiers of laicized priests, the Vatican will be in the awkward position arguing that, as a sovereign body, it is not subject to external intervention: the argument that was brushed aside in the rush to bring change at the Knights of Malta.)

But again, the furor over the Knights of Malta is not an isolated incident. Recent weeks have also seen:

All these incidents have occurred in a Vatican where the climate has already been formed by the Pope’s tongue-lashings of the Roman Curia, by the blatant manipulation of the Synod of Bishops, by the Pontiff’s daily denunciations of “doctors of the law” and “rigid” clerics. A clear picture emerges: of a Roman Pontiff determined to impose his own will on the universal Church.

In a syndicated column that appeared last week, George Weigel effectively punctured the myth, popular in liberal circles, that Popes John Paul II and Benedict XVI imposed ideological control over the Vatican. Those Pontiffs, Weigel points out, regularly promoted men with dramatically different theological outlooks to the College of Cardinals, bestowing red hats on Cardinals Kasper, Marx, Tagle, Mahony, Daneels, Hummes, McCarrick, yes and Bergoglio. The same cannot be said of Pope Francis, who has elevated his potential allies (in the US, Tobin and Cupich) while passing over more senior prelates (Chaput, Gomez, Vigneron, Lori) whose approach did not match his own.

Writing in the National Catholic Reporter last December about the Pope’s bid to pack the College of Cardinals, Father Thomas Reese remarked approvingly that this was “the most revolutionary thing Francis has done in terms of church governance. He is doing everything possible to make sure that his legacy is continued by insuring his successor is someone who reflects his views.” Reese was honest enough to say that if Pope John Paul or Benedict had made the same sort of appointments: “Frankly, I would have been outraged.”

Knights of Malta rebuff Vatican: Investigation of our ‘internal’ matters is ‘unacceptable’

Pope personally asks head of Knights of Malta to resign