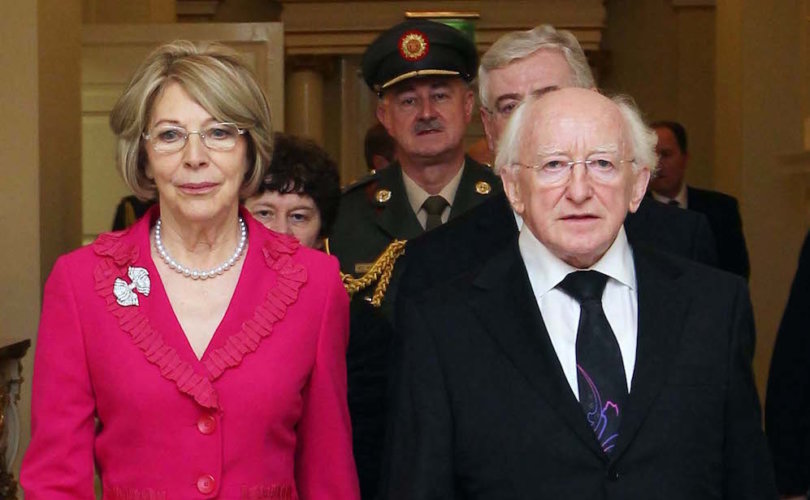 May 9, 2016 (LifeSiteNews) – Abortion is perhaps the most divisive and hotly-argued topic in Ireland today. Marches against abortion, such as the Rally for Life, draw tens of thousands of people, and in the most recent election, Labour, which promised to introduce wider abortion laws, were decimated in the polls.

Sabina Higgins, wife of the President of Ireland, Michael D. Higgins, has waded into the debate by describing Ireland’s abortion laws as “an outrage” and calling for abortion for unborn babies with a disability – children she described as having a “fatal foetal abnormality.”

Her unwelcome intervention was not only unprecedented, it was an appalling abuse of power and privilege.

The president’s role is largely a ceremonial one, and the neutrality of the office in national debates has long been considered vital to the inclusive nature of the presidency and the ability of any president to represent the entire people of Ireland.

Sabina Higgins’ intervention, then, was calculated and offensive. Her attack on the Constitutional right to life of unborn babies was designed to get maximum media attention – attention not garnered by her role as a private citizen but by virtue of being the wife of the president.

Ms. Higgins is unelected, but is using the platform of the supposedly non-political office of her husband to amplify her support for abortion.

If this had been the pro-life spouse of the sitting president, calling for stricter abortion laws, the establishment and the media elite would have had a collective meltdown.

It seems that Ms. Higgins is seizing the pulpit of the presidential office to push her own agenda on the killing of unborn babies. This is unprecedented, and has ensured that the office of president will now be seen as part of an abortion campaign, a move which would be opposed by the majority of Irish people.

Her comments were particularly offensive to families who had lost a child to a life-limiting condition, and the fact that she has targeted babies with a disability to justify her call for abortion is, in my view, reprehensible.

It is shameful to see the wife of the president use the language of discrimination, relying on the misleading and offensive phrase “fatal foetal abnormality”: a label rejected by both parents and medics because it is not a medical diagnosis.

In fact, there is no condition, none whatsoever, where a doctor can say with certainty that a child will not survive until birth. They are alive and kicking in the womb, however severe their disability, and they and their families deserve better care, not the cruel solution of abortion.

Today parents who have lost children to life-limiting conditions called on Ms. Higgins to apologize for the hurt she had caused in using their children’s illnesses to justify abortion.

The group Every Life Counts said that when parents lost their babies to these conditions the pain and grief was immense, but pointed out that the time parents had with their children was tremendously important and was a pathway to healing.

“These are our children, and we are tired of abortion supporters using our loss and our pain to push their own agenda,” they said.

“Today we feel that Sabina Higgins has misused her powerful (but unelected) position to disparage the worth of our beautiful children, whose lives were precious even if they were short – and that she has added to the misinformation around this issue.”

“Is Ms Higgins aware of new research showing that women who undergo abortion after a diagnosis of anencephaly are significantly more likely to suffer depression and despair?”

“Is she aware that we hear increasingly that parents come under subtle, but persistent, pressure to go to England for an abortion in these circumstances?” asked spokeswoman Tracy Harkin.

Ms. Higgins will not have to answer these questions because she enjoys the privilege of being the president’s wife, and with that comes the expectation that she is not expected to debate issues in the public forum.

Ms. Higgins should withdraw her remarks and apologize for the hurt caused by the abuse of the power of the president’s office.

Alternatively, she could enter the fray as a private citizen and debate the matter with the parents who have lived through this devastating diagnosis, and are speaking up to say that every life counts.

But she can’t have it both ways.

Niamh Ui Bhriain is director of the Life Institute.