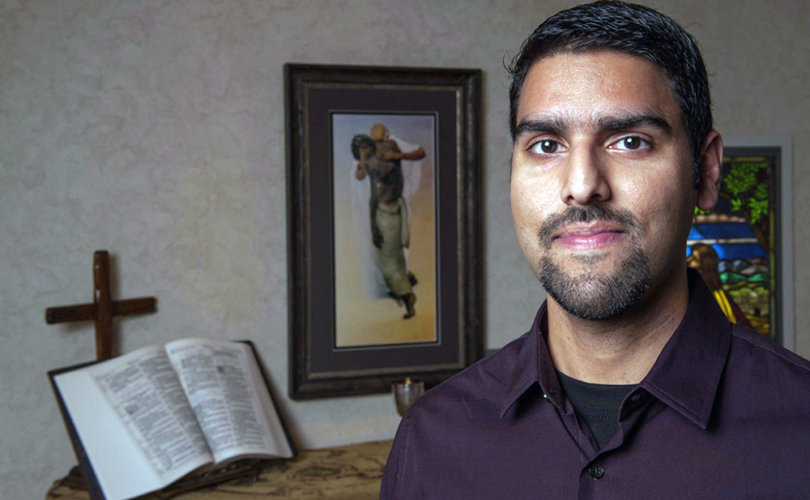 December 22, 2017 (The Catholic Thing) – Until recently, I had never heard the name “Nabeel Qureshi.” But by chance (providence), I came upon a reference to him. Sadly, it was a notice of his death at the young age of thirty-four.

In the death notice, I discovered that he was the author of several books. The title of one in particular struck me: Seeking Allah, Finding Jesus: A Devout Muslim Encounters Christianity.

Intrigued by the title and the brief account of his life given in the death notice, I purchased the book. I read it over a succession of evenings, completely enthralled. It is a remarkable account: told with honesty, clarity, and a passionate desire for truth.

It tells the story of a young man, reared since childhood as a devout Muslim, who through encounters with a fellow college student (a committed Christian) begins to question the very foundations of his personal and religious identity.

What makes the account so riveting is the single-mindedness of the intellectual and spiritual journey upon which Nabeel Qureshi embarks. He examines carefully and unflinchingly the evidence for the veracity of the New Testament and then of the Quran. The study transpires over the course of his college years, and on into medical school, as he debates passionately and vigorously with his friend, yielding only when the evidence proves compelling.

But the examination is far from merely an academic exercise. For the outcome would be fraught with more than personal significance. To anyone raised in the tradition and culture of Islam, conversion to Christ would entail profound familial and community consequences. As he lamented: “To acknowledge Christ meant destroying my family. Could He really charge me to do such a thing?”

Nabeel’s relations with his father and mother, his Abba and Ammi, were extraordinarily close and tender. His confession of the cost to them of his decision is heart-rending. Ever since they learned of his conversion to Christ, his father, a navy officer, “never stood as tall. I extinguished his pride.” And his mother, at hearing the news, collapsed and was hospitalized: “She survived, but her eyes have never been as bright since that day. I extinguished their light.”

What impelled this devoted son and devout Muslim to jeopardize parental affection and dissolve a secure and respected identity? Merely posing the question conjures the passionate response Paul made to the Philippians. “I count everything as loss because of the surpassing worth of knowing Christ Jesus my Lord. For his sake I have suffered the loss of all things, and count them as refuse, in order that I may gain Christ.” (Phil 3:7-8)

LifeSite: See below a video in which Nabeel very briefly (2 min. 40 sec.) tells his story.

Conversion is so intimate and complex a matter that each journey manifests distinctive colors and contours. Here is how Nabeel frames the new realization to which he came:

To be a Christian means suffering real pain for the sake of God. Not as a Muslim would suffer for God because Allah so commands Him by fiat, but as the heartfelt expression of a grateful child whose God first suffered for him.

In the face of a prevalent reductionist Christology, which uniquely stresses the humanity of Jesus, ranking him as a prophet of Israel, but scarcely more, the witness of this convert to Christianity rings resonantly:

The good news is that God himself loves us enough to enter into the world and suffer for us; that despite humanity’s inability to save itself, God saved us. That is the beauty of the gospel: it is all about God and what He has done out of His love for us. A gospel without the deity of Christ is an eviscerated gospel.

But Nabeel’s challenging witness doesn’t stop even at that firm confession. For though convinced in head and heart of the truth of the gospel, he still shuddered at the cost and suffering he foresaw. He wallowed, he tells us, in an agony of self-recrimination, mixed with self-pity. But, suddenly, as though in a luminous revelation, his whole being was flooded with a new assurance. He sums it up it thus: “This is not about me. It is about Him and His love for His children.”

This conviction impelled him to undertake a missionary discipleship, to share freely the liberating Gospel he had freely received. Had he known them, he would certainly have echoed the words of Pope Francis in “The Joy of the Gospel:” “The primary reason for evangelizing is the love of Jesus which we have received, the experience of salvation which urges us to ever greater love of him. What kind of love would not feel the need to speak of the beloved, to point him out, to make him known?”

Nabeel pursued his evangelical task for twelve intense years: studying, lecturing, writing, counseling. You can find his videos on the Internet and appreciate his fervor, insight, humor. Then, suddenly, the ministry of this vigorous and attractive young evangelist was assailed by a malignant cancer.

LifeSite: See Nabeel give very important, basic information about Islam and how to talk to Muslims about Christianity. This is must-view video.

He continued to share his faith – even from his hospital bed. A short video message “on his death bed” cautions against any misuse of his teaching. While stressing the importance of exploring matters of truth, he insists that this always be “undergirded by love and peace.” For the ultimate purpose must be “not to hurt one another, but to help one another.” He fervently prays that his ministry will leave “a legacy of love, of peace, of truth. Of caring for one another.”

One deeply mourns that so large-spirited a disciple was snatched from us at just thirty-four years of age. But the seeds he planted will continue to bear fruit. His courageous witness will inspire others. He left us as a young man; but one already mature in Christ.

College students believe Muslims should have more freedoms than Christians