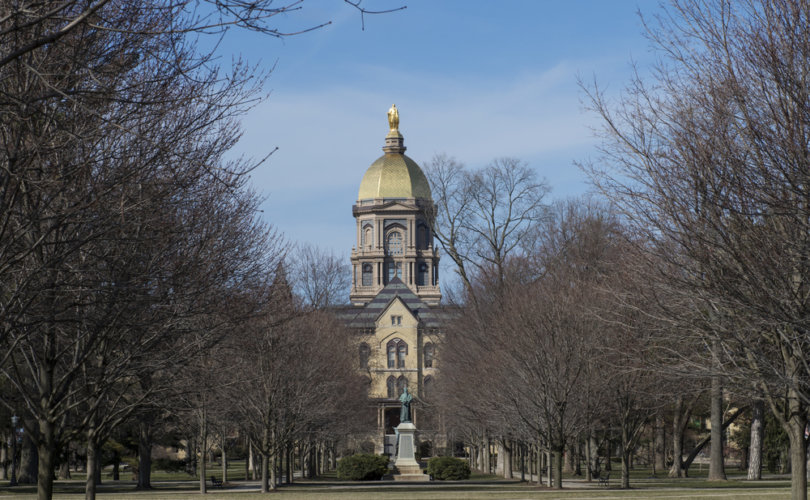 July 14, 2016 (Cardinal Newman Society) — The lazy summer days of late July mark the anniversary of the “Land O’ Lakes Statement,” issued in 1967 by a group of administrators of a cross-section of some of the most prominent institutions of Catholic higher education in the United States. Dubbed the “Declaration of Independence” of American Catholic universities from the juridical oversight of the American bishops, Land O’ Lakes continues to be one of the defining documents in setting the tenor and tone of the relationship between Catholic universities and the Magisterium in this country.

With next year marking the 50th anniversary of the drafting of this inauspicious document, it is worthwhile to recall its genesis and its ongoing impact throughout the world of American Catholic higher education.

In July 1967, Father Theodore Hesburgh, CSC, president of the University of Notre Dame, summoned representatives of 26 Catholic universities to join him at a retreat lodge owned by the Holy Cross Fathers in northern Wisconsin. He was joined by the presidents and top administrators of Georgetown University, Boston College, Seton Hall University, St. Louis University, Fordham University and other American and Canadian schools. This self-selected group consisted of the most outspoken advocates of unrestricted academic freedom within Catholic academia, as well as Archbishop Paul Hallinan of Atlanta, Bishop John Dougherty of the Bishops’ Committee for Catholic Higher Education, and high-ranking superiors of the Congregation of the Holy Cross and the Society of Jesus.

Over the course of their four-day meeting, the seminar participants crafted a “Statement on the Nature of the Contemporary Catholic University” which declared categorically that what was most needed for the flourishing of Catholic higher education was that bishops would avoid any and all “interference” in the Catholic academic world:

To perform its teaching and research functions effectively the Catholic university must have a true autonomy and academic freedom in the face of authority of whatever kind, lay or clerical, external to the academic community itself. To say this is simply to assert that institutional autonomy and academic freedom are essential conditions of life and growth and indeed of survival for Catholic universities as for all universities.

Such a categorical rejection of the role of the Magisterium of the bishops in overseeing Catholic education was the fruit of decades of frustration within Catholic academia, dealing with a hierarchy that often seemed to be excessively controlling, given to unilateral acts of censorship, and generally unsupportive of intellectual creativity and accomplishment.

In 1955 John Tracy Ellis, professor of Church history at Catholic University of America, had written a landmark essay “American Catholics and the Intellectual Life,” in which he lamented the “ghetto mentality” of the American bishops and, as a result, of American Catholic higher education. The bishops were almost by definition not men of academic accomplishment; rather, they were generally an elite club of men who excelled as administrators and fundraisers in the “brick-and-mortar” church of the mid-20th century. A bishop was expected to open schools, oversee the construction of new parishes, fundraise for hospitals and orphanages, and generally act as the CEO of a flourishing and constantly growing institutional church.

Most bishops delegated dealing with theological matters to trained experts who assisted them as necessary. This distinction between bishops and theologians was unknown in the ancient Church, when pastors such as Ambrose of Milan, Augustine of Hippo or Gregory the Great were also the outstanding theological writers and teachers of their day. By the 1960s, however, the divide between bishops and professional theologians within the Church had become pronounced.

Professors of theology, rightly or wrongly, felt that bishops were relatively uninterested in their work and usually only stuck their noses into academic matters to censor or condemn an expressed opinion as unorthodox. This authoritarian culture of excessive control and discouragement of intellectual creativity extended to the more widespread Catholic clerical culture in which bishops often treated priests in a high-handed manner with little regard for their feelings or personal desires. The result was a caste of priest-professors at many Catholic institutions of higher education who desired the right to speak and teach without interference from the hierarchy.

In crafting the “Land O’ Lakes Statement,” the priest-administrators of these top American Catholic universities invoked the principles of the American Association of University Professors, which categorically declared that there was no place in a “modern university” for any antiquated adherence to a creed of dogmatic truths or moral teachings. Rather, professors and students alike needed to be free, said Land O’ Lakes, to operate on an “intellectual campus” that has “no boundaries and no barriers.”

There could be no restraint of any kind placed upon freedom of inquiry and research: “there must be no outlawed books or subjects.” This freedom from ecclesiastical oversight was an essential aspect of “the evolving nature of the Catholic university” which would “necessitate basic reorganizations of structure.” The statement went on: “A great deal of study and experimentation will be necessary to carry out these changes, but changes of this kind are essential for the future of the Catholic university.”

The evolution of “creative Catholicism” affirmed by the “Land O’ Lakes Statement” essentially meant that after 1967 the authoritative teaching of the Church carried little if any weight in the teaching of theology to students at institutions of Catholic higher education. A “parallel magisterium” of theologians within the Church was effectively created, which taught as it pleased in the name of “freedom of thought” and of being fully “modern and American.”

The defining moment of this parallel magisterium occurred just a year after Land O’ Lakes in July 1968, when over 500 theologians co-signed a “Statement of Dissent” rejecting the teaching of Pope Paul VI’s encyclical letter Humanae Vitae. This parallel magisterium of dissenting Catholic theologians continues to be the definitive voice in the teaching of theology in the majority of American Catholic institutions of higher education.

A professor of theology is free to teach as he or she pleases, perhaps acknowledging the “opinion” of the Magisterium of the Church, while inviting students to “think for themselves” in reaching theological and moral conclusions. Catholic parents who pay for the education of their sons and daughters at schools carrying the word “Catholic” in their name — schools which raise funds by using the name “Catholic” — will often find those schools hold little if any commitment to a mission of teaching students to know, let alone love, the teaching of the Catholic Church.

Inspired by Land O’ Lakes, the majority of Catholic institutions of higher education have sacrificed their Catholic identity in the name of freedom and being “fully American.” (There are some faithfully Catholic colleges and universities that are doing quite well.)

Freedom to Be Catholic

Ironically, it would seem that in their passion to become “fully American” the authors of the “Land O’ Lakes Statement” downplayed one of the most basic principles of American identity, that of freedom of religion. By being fully and uncompromisingly committed to its Catholic identity, a Catholic university is actually “more American,” not less. The American commitment to plurality and tolerance in religious expression, as well as a commitment to diversity in educational methods and perspectives, should mean that there is ample space for the full expression of Catholic identity by Catholic universities within the broad spectrum of American higher education.

The unique commitment and integrity of Catholic educators to “be themselves” by professing and living the fullness of the teaching of the Catholic Church is a legitimate expression of diversity. The freedom to be “totally Catholic” — a free commitment which necessarily involves submitting to the theological authority of the Magisterium of the Church in matters of faith and morals — makes a Catholic university unique in its contribution to a wider civic discourse and thus more free to be at the service of the common good of American society. Any expectation that a Catholic institution would downplay its Catholic identity for the sake of the common good is an expectation that is inherently “un-American.”

Caught up in the unique cultural moment of the late 1960s, the Catholic educators who issued the “Land O’ Lakes Statement” blazed a trail in which Catholic institutions of higher education became indistinct from their secular counterparts in effectively denying the existence of dogmatic truth. The end result of “Land O’ Lakes” has been a landscape of Catholic higher education which is less diverse and sadly less uniquely able to inspire genuine Catholic creativity in the young minds it forms.

Father Peter Mitchell is a priest of the Diocese of Green Bay. He is the author of The Coup at Catholic University: The 1968 Revolution in American Catholic Education (Ignatius Press: 2015). Reprinted with permission from the Cardinal Newman Society.