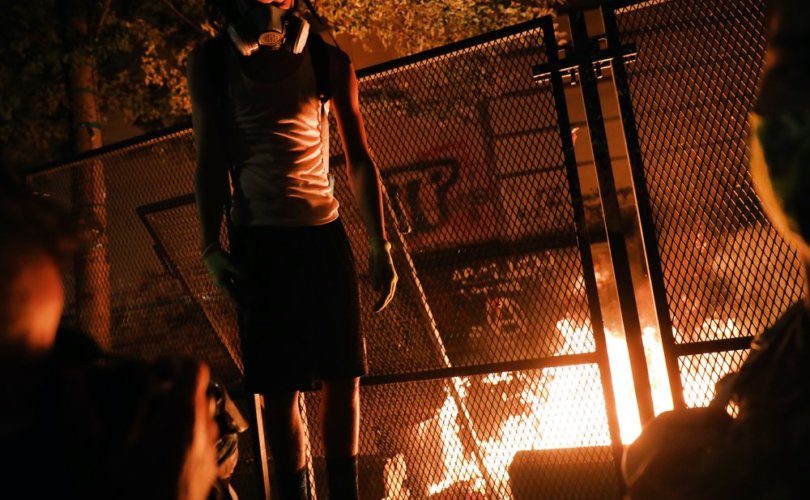 Rioters on July 27, 2020 in Portland, Oregon. For over 57 straight nights, protesters in downtown Portland have faced off in often violent clashes with the Portland Police Bureau and, more recently, federal officers. Spencer Platt / Getty Images

July 28, 2020 (LifeSiteNews) – The seditious uprisings in response to George Floyd’s death have shaken the nation. New York Times op-ed writer Amna Akbar calls them “far different from anything that has come before.” As proof of this new wave, she points to the size of the protests and their duration. Clearly, the media’s favorable spin on the riots is unprecedented.

All the pieces have come together to foment this dramatic upheaval. The left has managed to unite diverse causes like Black Lives Matter, the defund the police movement, the cancel rent effort, and the Green New Deal. The panic around the coronavirus crisis is a perfect backdrop of instability to institute drastic change.

The left has also created a mood of agitation that tries to project the idea that it is on the cusp of creating a radical new society that will finally overthrow the power structures that cause oppression.

A horrific remaking that offers nothing new

Despite all these factors coming together, the left offers nothing new. The goal is always the same—to overthrow what remains of Christian civilization in society. The characters have changed. The new proletariat is no longer oppressed workers but the oppressed identities that have worked their way into a “cancel culture.”

The process of this struggle is far more advanced than in prior phases. The target is not only political power but also the destruction of every social and moral institution that undergirds order. If the 1960s were alarming, the present crisis threatens to be catastrophic. This is not reform; it is a revolution.

Worse yet, this is a dangerous time in which the left hopes to make a transition. The left wants to remake the world again. It wants to turn the world upside down and inside out. During these times of revolutionary change, the left seeks to destabilize everything.

The revolution is one

Those who desire a return to order should consider three characteristics of the left’s revolution in transition.

The first is that this revolution needs to present itself as a single revolution uniting a variety of causes. In its rush to bring about change, the left no longer hides behind single issues that appeal to different sectors. This new revolution unites all liberal causes into one and makes them almost interchangeable.

Thus, Black Lives Matter embraces the LGBTQ+ agenda whose militants endorse the Green New Deal. Every social movement comes together to demand the defunding of the police. The left sympathizes and never condemns Antifa’s violent tactics as it terrorizes and “Portlandizes” America. All groups join feminists and rally in support of abortion.

These movements are cross-pollinating each other and expanding their grassroots bases. Racial, climate, and economic “justice” groups are finding common cause.

“Leftist movements today see our crises as intersectional,” writes Akbar. “Police violence, global warming and unaffordable housing are not disconnected, discrete problems; instead, they emerge from colonialism and capitalism.”

Those who defend order must recognize the oneness of the revolution and expose the left for what it is—a single movement that desires the overthrow of what remains of Christian civilization. Knowing that the Revolution is one makes it easier to oppose.

This fight is no longer about the individual issues of civil rights, the environment, or racism. This revolution wants to remake society, all of it. The left admits this goal, and its confession signals the end of single-issue politics for both left and right. It is now worldview vs. worldview.

The second characteristic of this new revolution is that the left is making its radical goals very clear. Activists are not interested in hiding their real agenda to avoid reactions. They had no shame in proposing a CHAZ/CHOP community as an idealization of their utopian dreams. They make no apologies for turning Portland into a battlefield for violent revolution.

The BLM/Antifa activists are not interested in reform. Theirs is a revolution that challenges all premises. It presupposes a total change of all society in the hellish image of a world without God and order.

The defund the police movement, for example, makes it very clear that it desires the abolition of police. Any defunding is merely a rapid intermediary phase to the final goal. Indeed, city councils like that of Minneapolis are already taking steps to dismantle the police and introduce a radical new program of community organizing. Will their novelty be akin to the old soviets? Activists seek to deprive the State of its coercive power, which protects society against disorder and anarchy. However, a State without police powers cannot endure.

Black Lives Matter openly proclaims goals on its website goals that include the promotion of LGBTQ “equality,” socialist measures, and non-Western family structures. The cancel rent effort does not desire the temporary relief of poor tenants but the abolition of private property and the establishment of free housing as a human right. This is urban reform—an evergreen communist demand. All these programs are radically contrary to the social structures underlining a Christian civilization.

Those defending order need to expose the revolutionaries’ radical goals. Most Americans do not want these goals since they are so contrary to America and its heritage.

The left is radicalizing

A third characteristic of this revolution in times of transition is that the left is radicalizing. To maintain the dynamism of its forward motion, it must constantly be moving ever more leftward. It must exhibit ever more vitriol toward anything resembling Christian civilization. Even the most insignificant things—bathrooms, football, and pronouns—must be weaponized and used against the liberal establishment. Its attacks take on an almost ritualistic tone, full of symbolism and theatrics.

The left is radicalizing and demands that its supporters fall in step behind the new revolution. For this reason, many moderate leftists are being purged from the ranks. Liberal educators without sufficient zeal for the cause can find themselves “canceled” by the culture. The New York Times centrist editor Bari Weiss resigned because she found herself the target of zealot staffers who wanted her out. Jeff Bezos, who supports every liberal cause, found protesters outside his housing complex with guillotine (literally) to protest his excessive wealth.

Indeed, radical leftists are attacking the liberal establishment and calling for its downfall. The under-zealous liberals respond with the most unbelievable concessions in the hopes of saving their situation. The revolution devours its own. However, the white-hot rage against all things Christian presents a real threat to society as it tears down every statue, law enforcement institution, and historical narrative that stands in its way.

The revolution in times of transition represents dangers, opportunities, and weaknesses. It is dangerous because of its explosive nature that threatens to destabilize society. As the revolution opens up its flanks wide to reveal its true yet horrific face that it usually masks, opportunities are created for those who know how to denounce it. Such exposure can thus spark significant and victorious reactions. Another risk the revolution runs when radicalizing comes from its speed: Doing too much, too fast. It leaves behind enormous swaths of the public.

The radical attack on all things Christian can also serve to trigger lukewarm Christians to reassess their life priorities. With the help of God’s grace, they can return to the Father’s house, join the counter-revolution, organize actions of surprising efficacy, and participate in the triumph of Mary’s Immaculate Heart.