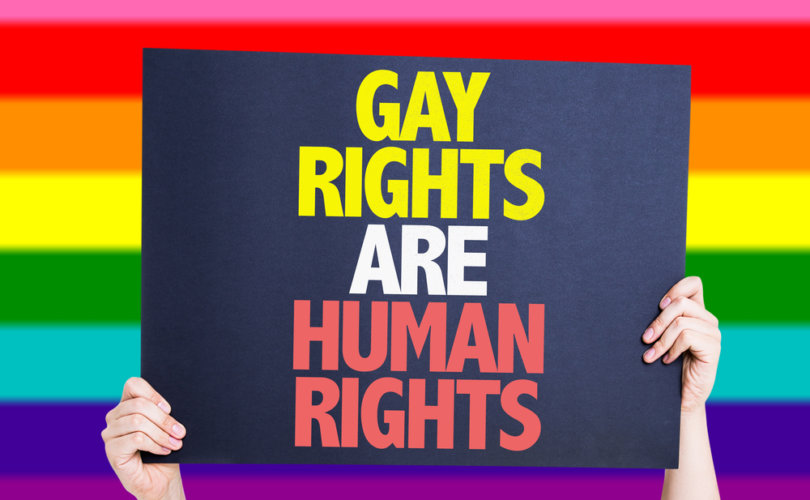 April 6, 2016 (ThePublicDiscourse) — In the realm of international human rights law, major conflicts are developing today between freedom of conscience and lesbian, gay, bisexual, and transgender (LGBT) policies. In these conflicts, much more is at stake than the rights of religious people. Everyone who cares about human rights for all—LGBT or not—should be concerned about the resolution of these conflicts, for the continued viability of the entire human rights framework hinges on their outcome.

Therefore, they created the strongest level of legal protection for it.

The post-World War II generation vowed “never again” after the Holocaust and created a system of international law to protect the human rights of every person. In 1947, the United Nations commissioned individuals from different nations, cultures, and religions to draft the Universal Declaration of Human Rights (UDHR). They could not agree on divinity, but all saw the need for a transcendent basis for human rights, which they outlined in the first Article:

All human beings are born free and equal in dignity and rights. They are endowed with reason and conscience . . .

The UDHR itself didn’t create rights; it merely recognized that they arise from human dignity, reason, and conscience.

The protection of freedom of conscience is strongly expressed in UDHR Article 18:

Everyone has the right to freedom of thought, conscience and religion; this right includes freedom to change his religion or belief, and freedom, either alone or in community with others and in public or private, to manifest his religion or belief in teaching, practice, worship and observance.

The UN General Assembly further strengthened protection of these freedoms in 1966, when it adopted the legally binding International Covenant on Civil and Political Rights (ICCPR). In that treaty, the right to conscience is one of only seven rights that are “non-derogable”—meaning governments must always respect them, even during public emergencies.

Throughout its history of interpreting the ICCPR, the UN Human Rights Committee (the “Committee”), has described freedom of conscience as “far-reaching and profound.” In conflicts between freedom of conscience and interests of the State, the Committee has sought to give the maximum amount of space to individuals to follow their consciences. Why, then, do we have cause for concern?

Recently LGBT policies have proliferated at an incredibly rapid pace. LGBT activists now seek to advance new policies at the United Nations on the basis of sexual orientation and gender identity. Basing new “human rights” on these grounds will open the door to an infinite variety of demands and problems. Where conflicts have arisen, LGBT activists have sought to subordinate freedom of conscience to LGBT policies—a trend that endangers the universal human rights system itself.

Some may claim, as then-Secretary of State Hillary Clinton did, that “gay rights are human rights and human rights are gay rights.” This statement misleads by (1) implying that same-sex-attracted and transgendered persons do not currently enjoy human rights protections, and (2) suggesting that all LGBT claims merit recognition as new human rights. Secretary Clinton has pointed to tragic attacks on same-sex attracted and transgendered persons. Yet no one can credibly assert that LGBT persons do not have human rights. The UDHR and ICCPR protect every individual from arbitrary arrest, torture, and extrajudicial killing by the State, because all humans have human dignity, regardless of their sexual attraction or gender preference. If any person is denied these rights (whether they identify as same-sex attracted or not), then UN human rights bodies should investigate and strengthen enforcement of their rights. Secretary Clinton names a problem that already has a solution.

The LGBT movement’s attempts to focus exclusively on violence against persons who identify as part of that community, however, injects bias into and undermines the impartial nature of the human rights system. Violence against heterosexuals is equally unjust.

Such claims also misleadingly imply that the claims of LGBT activists are co-extensive with existing human rights. This is not true, however, as LGBT activists claim many new human rights on the grounds of sexual attraction and gender preference.

The LGBT roadmap for effecting change in international human rights law is the Yogyakarta Principles (YP). Described by Human Rights Watch as “groundbreaking,” LGBT activists are using the YP to press for “sexual orientation” to be read into all human rights treaties and documents. The YP cites “sexual orientation and gender identity” as “integral to every person’s dignity and humanity.” Based on this new understanding of human dignity, the YP says “States may incur additional obligations as human rights law continues to evolve.”

LGBT activists do not base human dignity on reason and conscience, but rather on their sexuality. Yet once rights and “additional obligations” can be created based on sexual and gender preferences, they can become endless—and ultimately meaningless.

LGBT Policies and the Right to Marriage

Of the many policies that LGBT activists assert, the one that has come into sharpest conflict with freedom of conscience is the asserted right to same-sex marriage. UDHR Article 16 states:

Men and women of full age, without any limitation due to race, nationality or religion, have the right to marry and to found a family. They are entitled to equal rights as to marriage, during marriage and at its dissolution. . . . The family is the natural and fundamental group unit of society and is entitled to protection by society and the State.

In 1948, the drafters of the UDHR were certainly describing the concept of marriage as between one woman and one man. The drafters took care to note that the institution of marriage and “family” (referring to a mother and a father) was a “natural and fundamental” group unit that both State and society should protect. Yet now, around the world and at the United Nations, LGBT activists seek to redefine Article 16 to include marriages between two men and two women.

In 2013, the European Court of Human Rights (ECHR) upheld decisions by the British government to force a civil servant to provide marriage certificates and a counselor to provide psycho-sexual counseling to same-sex couples. Both had co-workers who were willing to provide these services. Yet the ECHR found that their employers rightfully terminated them because they were obligated to uphold “equality.” In doing so, the ECHR rejected the deference historically provided to conscience in the UN framework, and elevated the assertion of “equality” above freedom.

No true, universal human right grounded in human dignity would ever lead to the violation of other human rights. However, the LGBT movement’s efforts to limit debate of its claimed “rights” do just that—by limiting freedom of conscience. YP Principle 21(b) states that governments must “[e]nsure that the expression, practice and promotion of different opinions, convictions and beliefs with regard to issues of sexual orientation or gender identity” not be “undertaken in a manner incompatible with human rights.” The vague phrase “incompatible with human rights” justifies censoring those who hold “different opinions, convictions and beliefs” and violating their freedom of conscience.

In 2011, a State Department official responded to a UN declaration on LGBT policies with the following:

That is the way these international norms are built . . . It’s not from scratch. It builds up over time. So this is really a critical beginning of a universal recognition of a new set of rights that forms part of the international system.

This statement is based on the view that the State or the United Nations is the source of our human rights. Charles Malik, one of the drafters of the UDHR, warned after World War II that when the State has the ultimate power to create rights, it also has the power to revoke them. Only when human rights are grounded in transcendent, fixed authority can they stand the test of time and shifts in power. If LGBT policies are elevated above freedom of conscience, it will be to the detriment of all human rights. Our consciences are the basis of our dignity upon which we can claim to have universal and inalienable rights that are not derived from the State.

Travis Weber is the Director of the Center for Religious Liberty at the Family Research Council. He is a graduate of the US Naval Academy, Regent University School of Law, and Georgetown University Law Center, where he studied international law and human rights. L. Lin is a graduate of Harvard Law School who has defended freedom of thought, conscience, and religion for people who hold a variety of beliefs. This essay is based on the larger article which appears in the online supplement of the Regent Journal of Global Justice and Public Policy, and which will be published in the Spring 2016 edition of that journal. Reprinted with permission from The Witherspoon Institute.