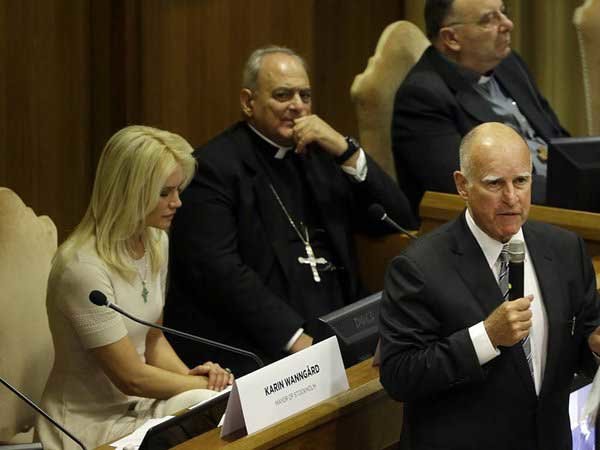 This article was originally published by Pewsitter.com on June 21, the opening day of the Vatican Summit, “Modern Slavery and Climate Change: The Commitment of the Cities,” and is re-published with permission of the author.

Down another rabbit hole we tumble.

California Governor Jerry “Moonbeam” Brown and eight Democratic U.S. Mayors descend on the Vatican today to worship at the altar of the new religion of environmentalism. The Vatican’s latest selection of eco experts continues to get ‘curiouser and curiouser’. In Vatican Eco-wonderland, everything is turned upside down; left is right, wrong is right, moral is ecological. Despite Pope Francis’ assertion in Laudato Si that he is open to dialogue from all sides, no Republican mayors or governors were invited to the eco convention.

Behind each door is a more radical, more anti Catholic politician invited by the Vatican to elicit support for its eco edict. The DRINK ME Potion of environmentalism is feasted on by Pontifical Academy of Social Sciences (PASS) as it sets the table for the UN Sustainable Development Goals.

“Religion deals with the fundamentals. When you deal with fundamentals of what makes the atmosphere and the weather, and whether that permanently or radically changes, that’s very similar to a fundamental principle of right and wrong.”

The newly christened ‘religion of environmentalism’ chanted by Governor Brown sets the stage to build momentum for the upcoming U.S. Papal visit, the UN Sustainable Development Summit, and the Paris Climate Treaty. Governor Brown anoints the new moral and religious force of the eco movement:

“Pope Francis is bringing to climate change a moral and theological dimension that adds to the market and political calculations.”

Yes, the global warming movement is immensely warmed by the arrival and presence of its long missing energy source, a moral voice, now supplied by Pope Francis. Yet, as the author and anthropologist, Michael Crichton cautioned about the dangers of deifying the climate change movement:

“{S}cience offers us the only way out of politics. And if we allow science to become politicized, then we are lost. We will enter the Internet version of the dark ages, an era of shifting fears and wild prejudices, transmitted to people who don't know any better. That's not a good future for the human race. That's our past. So it's time to abandon the religion of environmentalism, and return to the science of environmentalism, and base our public policy decisions firmly on that.”

These democratic pols share the papal world view of climate change and UN sustainable development. Curiously though, these Vatican hand picked and personally invited politicians are bitter enemies of the moral teaching of the Church, who actively and aggressively promote political policies and laws in direct contravention of the tenets of the Catholic Church.

Take for example, Jerry “ex seminarian” Brown. Brown supports legalized abortion and same sex marriage. In 2013, Brown signed into law one of the most radical abortion laws in the country which gave California women more access to abortion, by allowing nurse practitioners and certain other non-physicians to perform the procedure during the first trimester of pregnancy. Brown also opposed a bill banning same sex marriage.

Perchance, did Archbishop Gomez of LA place a call to the Vatican and ask why are you welcoming to the Vatican, a baptized catholic who as a politician has promoted abortion and same sex marriage in contravention of the faith and morals of the Catholic Church? This might be a sign of confusion and contradiction to faithful Catholics?

How about Ed Lee, democratic mayor of San Francisco, environmentalist and abortion proponent? Did the Vatican check in with Archbishop Cordileone about the Ed Lee invitation?

Are Catholics free to ignore and condone the anti-Catholic stances of these politicians? Are the mayors’ environmental beliefs more important to the Vatican than their position on abortion or same sex marriage? What are Catholics to believe when, in the words of Vatican Bishop Sorondo, “we can invite whomever we want.” Is that because the Pontifical Academy of Social Science has become a radical forum to elevate, not the tenets of the Catholic faith, but the new religion of environmentalism?

Surely the papal invitation to Mayor Marty Walsh of Boston must have raised the ire of Boston Cardinal Sean O’Malley, one of the eight Cardinals in Pope Francis’ Cabinet. Was Cardinal O’Malley distressed by the papal invitation to Boston’s most prominent Catholic politician who is virulently pro-abortion and refused to march in the St. Patrick’s Day parade because of the Church’s LGBT stance? Certainly, Pope Francis would respond to a phone call from Cardinal O’Malley about the Archdiocese’s political and moral adversary.

Was the prominent and popular Cardinal Timothy Dolan of New York displeased by the invitation to Mayor Bill de Blasio to speak at the Vatican. Cardinal Dolan is no shrinking violet and would certainly express his displeasure at the invite to a radical pro abortion, pro LGBT supporter. In fact, de Blasio is a longtime supporter of Nicaragua’s Marxist Sandinistas and de Blasio even honeymooned in Cuba, in violation of the U.S. travel ban. Cuba! No wonder, de Blasio was asked to speak at the conference.

De Blasio supports same sex marriage and even officiated at a same sex marriage. He, too, like Mayor Marty Walsh refused to walk in the St. Pat’s parade in protest of the Church’s stance. Not to worry, de Blasio has the political credentials that the Vatican needs in its environmental campaign.

These are the men that Pope Francis described during the conference as “the conscience of humanity”?

Last week, Catholics learned that the Pope of the Roman Catholic Church was not offended by a hammer and sickle crucifix. This week the Pope hosts the early Democratic convention featuring the most radical anti-Catholic leftists in American politics. Crichton saw the danger of mixing environmentalism with religion, a theology dominating the Vatican during the Francis papacy:

“We are energy sinners, doomed to die, unless we seek salvation, which is now called sustainability. Sustainability is salvation in the church of the environment.”

This week the Vatican is hosting its 7th Sustainable Development Conference of the Francis papacy by inviting 60 leftist politicians from around the world. Bishop Sorondo, who is hosting the event, when asked whether the “exclusive presence of mayors of the left of center is not a sign of partiality.” Sorondo heatedly responded that “the invitation is open to everyone.”

In the words of Lewis Carroll’s Alice, “I don't believe there's an atom of meaning in it.”

Climate change skeptics press their case to the Vatican

Alinsky Acolytes at the Vatican

Elizabeth Yore is an international child rights lawyer who has handled human trafficking cases throughout her legal career. She was a member of the Heartland Institute Delegation that travelled to Rome to urge the Vatican to avoid the anti life UN Sustainable Development agenda. She served as Special Counsel at Harpo, Inc. In that position, she acted as Oprah Winfrey’s Child Advocate in South Africa at the Oprah Winfrey Leadership Academy for Girls. Elizabeth was General Counsel at the Illinois Department of Children and Family Services and General Counsel at the National Center for Missing and Exploited Children.