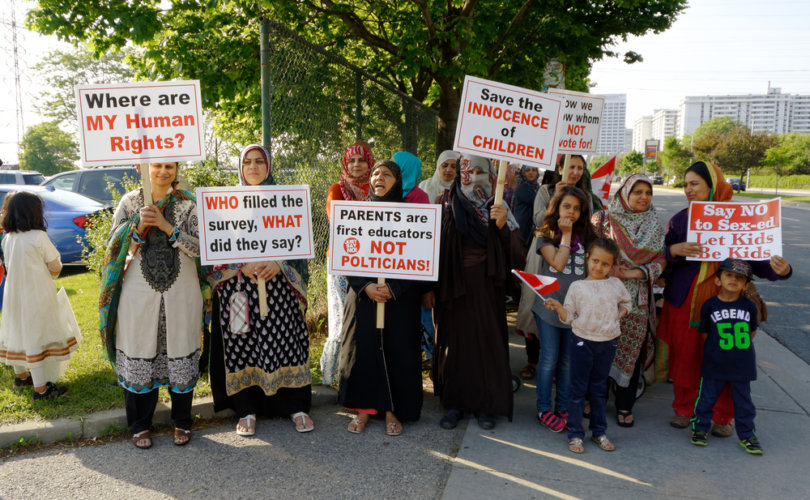 September 12, 2016 (Campaign Life Coalition) — Here at Campaign Life Coalition (CLC), we continue to receive inquiries from parents who are concerned about the controversial sex-ed curriculum for Ontario schools. The unprecedented parental resistance in Ontario was so powerful that it even made international news.

Nonetheless, it’s a fair question to ask whether the massive parental rebellion that took place over the last 18 months has accomplished anything.  After all, didn’t Kathleen Wynne simply ignore parents, and roll out the curriculum anyway?

I would answer that question with a resounding YES.  The parental protests, in varied and creative forms, have indeed produced valuable successes and important fruits that we can continue to build upon. To quote Victorian poet Elizabeth Barrett Browning, “Let me count the ways”.

A testament to this fact was a May 31st Forum Research Poll which found that a stunning 36% of Ontarians said they disapprove of the new curriculum.  That huge number, which represents a dramatic impact on public opinion, demonstrates the sheer power of the parental rights movement.  And it’s a figure that can be increased easily through awareness campaigns.

Just think about how big that number is.  At 36%, opposition to the sex curriculum is much higher than the support that voters are currently giving the Liberal Party of Ontario, down at 28%, according to an August 17th Forum Research poll. This shows that parents have made repealing the sex-ed curriculum a winning political issue. Chalk up a success, parents!

#2. Exodus and the price it exacted on school boards

The same Forum poll found that 16% of Ontario parents had either withdrawn, or considered withdrawing their children from the public school system over the sex curriculum. Again – a shockingly high number, especially for such a drastic action as pulling one’s kids from school. What do you suppose caused that huge number? Of course, it was the ongoing parental protests and student strikes which drew public attention to the radical nature of the curriculum. Parents, chalk up another point.

In turn, this broad-based opposition to the Liberal sex program caused school boards to lose funding based on student enrolment counts, which consequently resulted in teacher job losses. According to education funding formulas, each school board receives approximately $12,000 per student, per year.

Thousands of students have been permanently withdrawn from the public education system, and private-schooled or home-schooled instead, thus punishing school boards in the form of millions of dollars of lost revenue.

The Chair of the Toronto District School Board admitted to CBC News that the sex ed protests resulted, at least partially, in 100 teacher job cuts in that board alone.

In my book, that’s another victory! Hitting them where it hurts – in the wallet – is the best way to send school boards the message that you don’t want this dangerous curriculum forced on your children. And perhaps as a result, teachers themselves will have an incentive to push back against Kathleen Wynne's sex agenda?

Way to go parents! And believe you me, politicians at Queen’s Park have also taken note of the cuts that resulted from parental opposition.

#3. A school forced to bend

Another small victory was seen in Thorncliffe Public School where the Principal was forced to make a significant change to the curriculum. His school sanitized the planned Grade 1 lesson so that teachers would have a classroom discussion about “private parts” instead of using the explicit terms like “penis, vagina, testicles and vulva” that Kathleen Wynne and convicted child pornographer Ben Levin laid out for 6-year-olds.

The school bent in response to the tremendous pressure placed on it by our friends at the Thorncliffe Parents Association. That group of committed parents led a student strike for over one month, plus other protest actions throughout the year.

Admittedly, this was a small change. Nonetheless, it revealed a crack in Premier Wynne’s armor of apparent invincibility. And furthermore, this “bending” by the school to the will of parents was widely publicized. Therefore, it may have sent the message to other teachers and Principals across Ontario, that they, likewise, have the ability to ignore Kathleen Wynne’s radical lessons.

In fact, there’s another way that this small victory may provide a shield for some parents to protect their kids from morally and psychologically harmful sex-ed lessons. They can show their Principal or teacher a copy of the Toronto Star article and say:

“Look, I’ve asked you to not teach the controversial lessons in this curriculum, and here’s proof that you have the ability to ignore the curriculum.  This article reveals that the Principal at Thorncliffe Public School in Toronto changed the Grade 1 curriculum due to parental outcry. If he could do it, so can you in your school, with respect to any of these controversial lessons.”

It’s important to acknowledge as a victory, the fact that thousands of children who are now being homeschooled or private schooled, have been spared the mentally and physically damaging effects of the sex curriculum.

The awareness generated by the ongoing protests is what empowered parents to protect the safety and well-being of their kids.

As a result of the exodus of children from the public education system, not only are parents more vigilant about, and involved in, what their kids learn about sexuality, but it has also enabled the creation of many new private schools.

One mom and parental rights activist from the GTA, Maggie Amin, told us that the cost of private schooling in her community has dropped from approximately $500 a month per child, to as little as $180 per month. This is thanks to greater numbers enrolling because of sex-ed. This was a clear win for the many parents who are taking advantage of the lower tuition rates. Maggie shared that this burgeoning private school industry has also created much-needed jobs for members of her community.

When confronting the tyranny of the communist Soviet Union, the late U.S. President, Ronald Reagan, made a famous remark which I often recall when working on the political side of this battle:

“If we can’t make them see the light, let’s make them feel the heat.”

Premier Wynne’s approval rating has kept dropping since parental protests erupted, and is currently sitting at a disastrous 16%.

That’s at least partially because of Wynne pushing her radical sex-ed agenda upon an unwilling populace. She’s feeling the heat and we should count it as another fruit of our parental rebellion.

Although a long shot, the closer we get to the 2018 election, there may still exist the possibility of an internal revolt against Kathleen Wynne by her own Liberal caucus.  If Liberal MPPs see their increasingly unpopular, crazily sex-ed obsessed, Party Leader as a liability who might cost them their jobs, they might enact a “coup” to replace Wynne.

This is not beyond the realm of possibilities. It happened recently with the corruption-riddled Alison Redford, former leader of the Alberta PCs (who was also a liberal “progressive”).

Here’s another great development that should encourage all the parent activists who’ve been fighting the Wynne/Levin curriculum to keep on going… Parents in other provinces, faced with similar sex ed challenges, have been inspired by your resistance, and wish to emulate the Ontario parental push back.

Parent groups in Quebec and British Columbia have contacted CLC to get help in replicating Ontario’s parental rights movement.  They want to follow your example.

Parents can be proud of the unity shown by people of diverse backgrounds and beliefs coming together to protect the innocence of their children/grandchildren, and to stand up for parental rights.

Whether a Christian, Muslim, Sikh, Atheist, or from other religious or philosophical backgrounds, we all stand united to defend children against sexualisation. Whether Canadians of Chinese, Indian, African, British, eastern European or other ethnic origins, we all stand in solidarity to defend our parental rights.

The ongoing parental resistance succeeded in convincing PC Party Leader Patrick Brown, at least for a few days, that it was safe for him to take a public stand against the sex curriculum, in spite of the backlash he knew he'd receive from the pro-Liberal media that is so rabidly in support of radical sex-ed.  CLC's recent joint efforts with PAFE to run an anti-Wynne-Sex-Ed candidate forced Patrick Brown's hand.  On August 24th, Patrick Brown made a public promise, in the form of a signed letter, that “upon forming government”, the PCs would “scrap” the curriculum, and start over with a brand new parental consultation process.

Every parent who was involved in the protests needs to see this public declaration by Brown as a fruit of their sacrifice, notwithstanding the fact that Brown eventually did cave under media pressure from his masters at The Toronto Star. Sure, it was the presence of our independent candidate Queenie Yu, who forced Brown's hand for fear of losing the Scarborough-Rouge River byelection.  But it was all the parents who kept this issue alive for a year and a half, that made that climate even possible.

That's an impressive achievement of which those involved in the resistance ought to be proud.

What does the future hold?

Upon reviewing the above list of tangible successes, it becomes undeniable that the protests accomplished much indeed, and must continue.  When some disillusioned parent asks: “What have all the protests really accomplished?” we have to make it clear to them that the battle is far from over.

CLC and the other member groups of the Canadian Families Alliance have a long-term goal:  keep the resistance alive until the 2018 General Election, so as to make repealing the sex-ed curriculum the #1 ballot issue.

When politicians see that the voters are demanding the repeal of this disastrous curriculum – and are prepared to vote accordingly – they can be forced to listen.

In fact, the next major parental protest will take place at Queen’s Park on Wednesday, September 21st, from 12:00pm – 2:00pm.

I look forward to seeing you there!