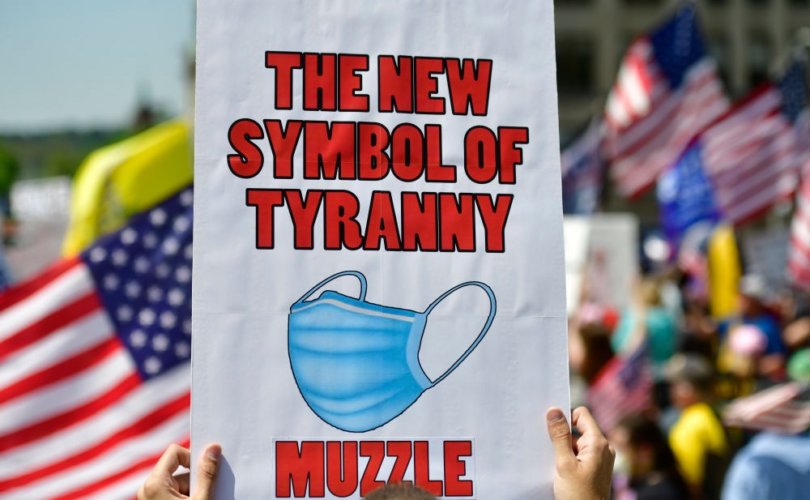 April 7, 2021 (AmericanThinker) — Why are those of us who have had our COVID vaccines still wearing masks?  We are protected from the virus and cannot carry the virus despite being admonished otherwise.  Is it because Maoism is still shaping our world?

While the West mistakenly believed that China would become more like us after embracing Capitalism, the West is becoming more like China; Maoism and Chinese communism are spreading like a prairie fire.

For those of us who had the opportunity to travel to China following Richard Nixon’s 1972 visit, besides the overall bleakness resulting from Chairman Mao Zedong’s reign, the uniform that every person in China wore was disconcerting.  The Mao jacket was the quintessential Chinese communist apparel.  It symbolized Mao’s ideology: he intended to equalize more than a billion people by what they wore.

Does this sound familiar?  Is the mask a means to “equalize” the West?

Dr. Fauci, whom some see as the leading authority on all things COVID, promotes wearing the mask despite inoculations.  He has even suggested that we wear two masks.

Since ascending to extraordinary national prominence, Fauci has moved the goalposts; flip-flopped on masks; obfuscated the facts; been seen in public without his apparel; and, outside the media and some true believers, lost credibility.

One must ask, though: What is behind Fauci’s confusing messaging?  After all, he is not a dumb man.

Liberal activists like Fauci, including those ensconced in the White House, appear to be drunk with power and deliberately moving toward the Chinese social control system that Barack Obama set into motion.  It was Obama who promised “fundamentally transforming the United States of America.”

And “the mask” is not the only means of controlling our society.

— Article continues below Petition —
Midwest Bishop and Priest: Petition the city to drop mask charges against home-schooling Mom of 11
Show Petition Text
4629 have signed the petition.
Let's get to 5000!
Thank you for signing this petition!
Add your signature:
Show Petition Text

Consider the Biden administration running roughshod over the First, Second, and Tenth Amendments to our Constitution.  (The less famous Tenth Amendment reserves for the states all power not explicitly lodged with the federal government.)

Then there’s the hare-brained idea of vaccination passports.

And there is more, so much more.  Have you read Biden’s $2-trillion so-called “infrastructure plan” that more accurately intends to “reshape” capitalism?  Much more money is earmarked for the Green New Deal, a land-grabbing, money-grabbing social control hoax, than for actual infrastructure.

Does any of those in charge know that the climate has been drastically changing since the beginning of time?  Of course they do, but never let the truth get in the way of a narrative that works for the cause.

The above is a drop in the bucket for implementing Barack Obamas fundamental transformation of America and seeing the federal government gain complete control over our society.

After the fall of the Roman Republic, the first substantial constitutional republic to appear again in the world was America.  When the lights go out here, the dominoes will fall for freedom-loving peoples across the planet.

How many thousands of years will pass before freedom and liberty can emerge from the dark shadow of tyranny?

For us who are on our way out of this world, “fundamentally transforming” America is an eye-roll.  For our children, grandchildren, and great-grandchildren, it is a tragedy.  They will not live with the freedoms and liberty that have made America the envy of the world.

One can’t help wondering if it will be worse to lose your freedoms or never to have known what it means to be free.  The only hope is for the silent majority to rise and confront the abomination facing our country.

Unlike our corporate CEOs, who, if they aren’t craven, are hardcore ideologues, it takes courage to stand up for America and her ideals in today’s woke culture.